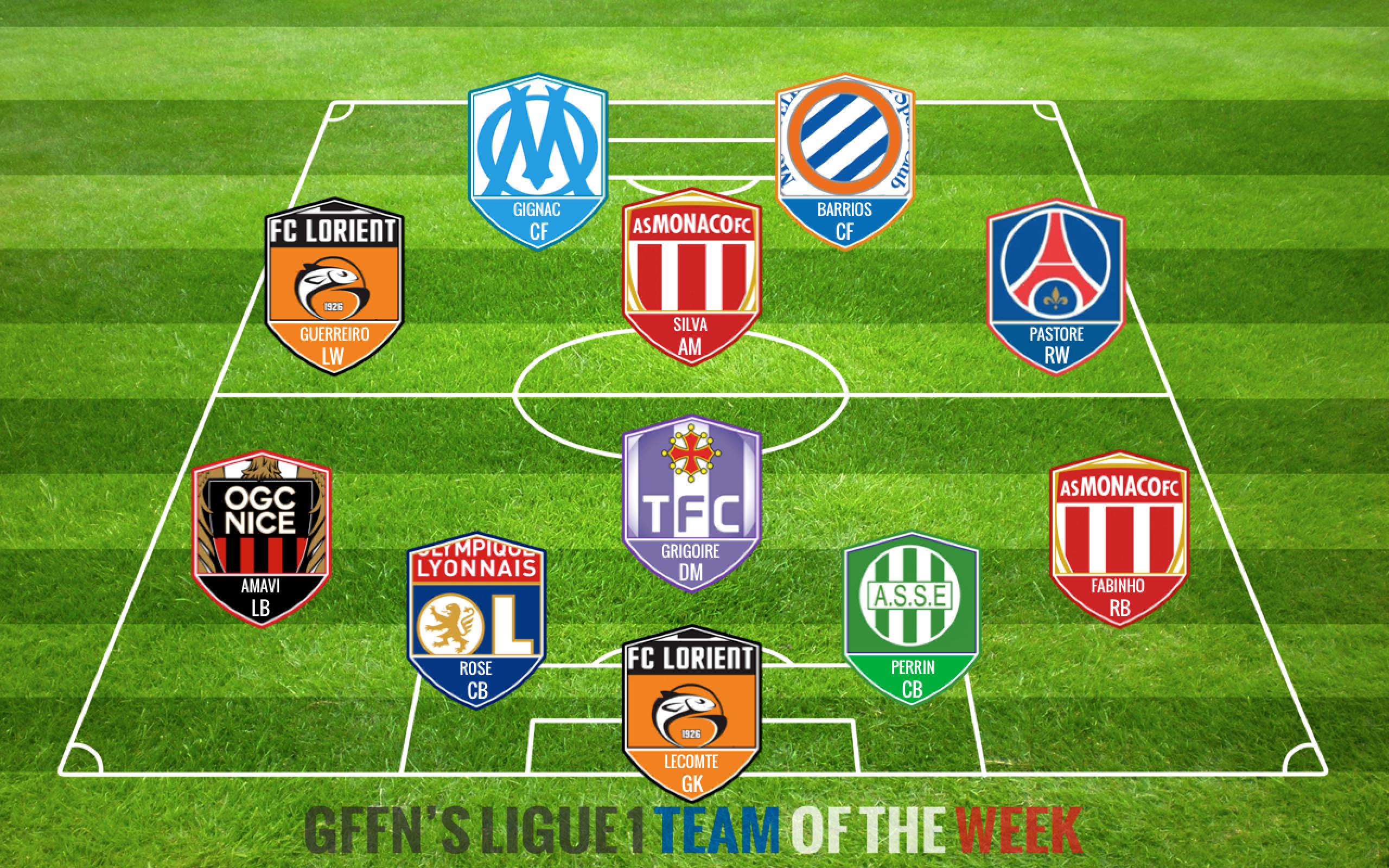 Simon Scutt gives you his weekly run down of the best eleven players to grace Ligue 1’s pitches from the latest weekend of action.

Lorient secured a good home win against Lille on Saturday night, keeping a clean sheet in the process. He made a number of good saves stopping Lille from scoring a number of times, notably from a Nolan Roux header. Lecomte chalking up his fifth clean sheet of the season.

Bordeaux had only lost once at home all season, albeit a thumping 5-0 loss to Lyon before the winter break, and Nice had a poor away record ahead of Friday night’s clash. Things began following the script with Bordeaux leading until the 66th minute. It was then, when left back Jordan Amavi leapt up to head home from a long range free-kick drilled into the box.

Lyon went north to take on Lens at Amiens and saw off the threat of the home side with relative ease. Two first half goals made the difference and the Lyon defence held strong to deny the attack. Lyon thus maintain their position as leaders and are a single point ahead of PSG and Marseille.

Just as in the first match of the season between this teams Sunday’s game finished goal-less. Saint Etienne continued their record as France’s strongest defence, they have only let in 13 goals all season, moreover they have kept the same number of clean-sheets. Saint Etienne also remain unbeaten for twelve games.

Following on from their success against Guingamp in the Coupe de la Ligue where they will progess to the semi finals against Bastia Monaco defeated the season’s surprise package Nantes. Monaco have been steadily, if quietly, progressing up the league table towards the European places since November.

Lorient gave themselves a little bit of breathing space from the bottom three with a 1-0 win over a Lille side that are languishing in mid-table. Portuguese wide-man Guerreiro chested home from close range in the second half to cap a fine display. Lille meanwhile failed to find the net again, they have only found the net 19 times in 21 games.

Toulouse took on resurgent Bastia at home on Saturday night looking to climb away from the relegation zone, they are only two points off the bottom three. Bastia, have the same the number of points as their opponents after their 1-1 draw. Bastia boosted by their fantastic win the previous week took the lead through an own goal in the second half. Toulouse restored parity with a lovely finish from Martin Braithwaite.

Monaco welcomed Nantes to the Principality on the back of nine matches unbeaten and a long period without conceded a goal. The 1-0 score-line came from Silva being able to poke home the ball from within a crowded box. Nantes meanwhile suffered a fourth defeat in five away games.

A somewhat disjointed performance from the champions saw them go behind to struggling Evian who would also equalise just after half –time. But, it would be the Argentine’s goal that gave PSG the lead and the break from their opponents. Their first real flowing move of the match was swept home by the impressive Pastore for his second of the season. The win meant they climbed back on to the podium ahead of their trip to Saint Etienne next weekend.

Marseille did what they needed to do against a plucky Guingamp side on Sunday night, a lively game with plenty of chances for both sides. The visitors could well have scored in the first half, hitting the post and drawing a good save from Mandanda. Gignac meanwhile scored his first goal since the beginning of December heading home from Payet’s freekick.

An entertaining game took place at Metz on Saturday night – 5 goals, two penalties and a hat-trick for Lucas Barrios. The first came from Montpellier’s first penalty of the season which was cancelled out by a Metz penalty three minutes later. His second brought his side back to level terms when he latched onto a through ball and finished with the outside of his foot to fire past Carrasso in the Metz goal. His third was a poachers effort after a long range strike hit the post and flicked off the goalkeeper to leave Barrios with a close-quarters finish.

Monaco have eye on Brazilian right back