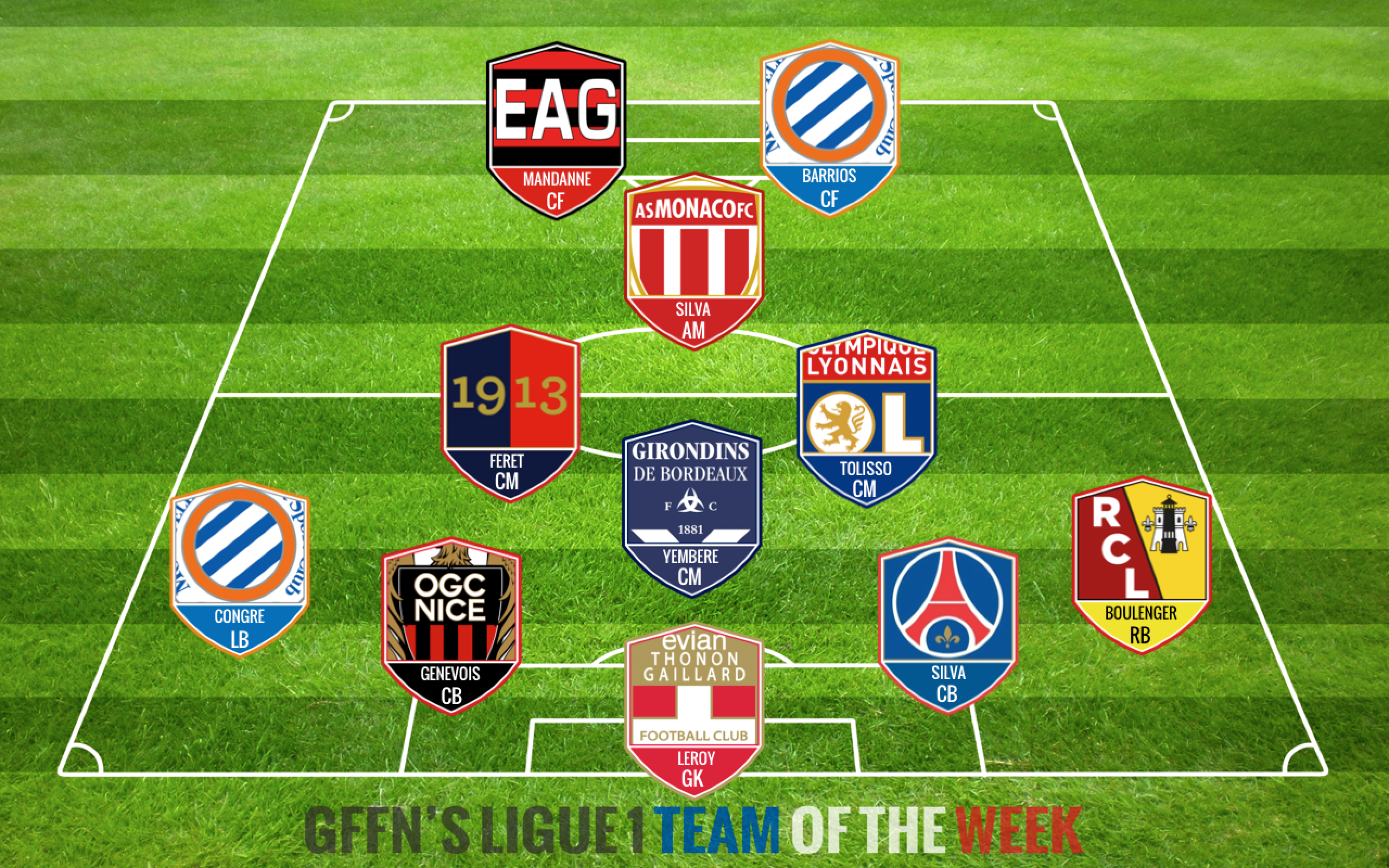 Simon Scutt takes you through his best XI after an action-packed weekend in French football’s top tier.

Toulouse made the trip East to take on Evian in Annecy on Sunday but would come away with nothing. Evian took the lead as early as the fourth minute and managed to keep it that way right until the end. The away side frittered away numerous chances most of which were repelled by the excellent Leroy in the Evian net. Evian have now overtaken Toulouse in the table.

Lens went to Reims hoping to improve their recent run of form, while they did not come away with the three points, just the one, they will feel content enough given their travails this season. In a scrappy match played on a poor surface neither team were particularly good with the ball thus a nil draw was not a surprising score.

PSG came away with their second win from Saint Etienne this month by the same 1-0 score line. A Zlatan penalty was sufficient to condemn the home side to their first defeat since the beginning of October.  Silva was one of 5 Brazilians in the starting line-up for PSG as they continue in their quest for a third title.

Nice were beaten 4-0 by a rampant Marseille in august but they got their revenge this time around with a 2-1 win over their local rivals. It was defender Genevois who steered the ball over the line early in the second half. The home side were forced to play the second half a man down after Gomis’ two yellows in quick succession, but they still managed to compete, doubling the lead shortly after which they held onto even after Marseille made it 2-1.

Montpellier seem to be enjoying 2015, three wins out of three in league have seen them climb up the table to within shouting distance of the European places. Whether this will last is up for discussion but they were certainly convincing against Nantes on Saturday. Four goals and a clean sheet is almost the perfect night for the men in orange and blue.

Bordeaux were the visitors to Corsica looking to get back to winning ways after a disappointing run of results. The game was not one for the archives as both sides missed chances to take the three points. Yet, it was a solid display by the away side that are without a large number of their African contingent who are taking part in the cup of nations.

Going back to your former club who took the decision to let you leave always had the potential to inspire players to prove something to said club; this is exactly what happened when Feret went back to Rennes with his Caen side. Caen pulled off a surprise win and score line, winning 4-1 for the second week running. Feret was at the heart of everything scoring once and setting up the other three.

Lyon got over their midweek cup defeat with a routine victory against strugglers Metz, winning 2-0. The only sour note coming from Lacazette’s forced withdrawal after he converted his penalty to open the scoring. It would be utility man Tolisso who put the game beyond doubt with a wonderful dipping long range strike late on. Lyon are four points ahead of PSG in second.

Fresh from sealing his permanent switch to the principality Silva was key in helping his side get over the line against Lille. This maintains Monaco’s good run that sees them in fifth place. Berbatov’s goal was the only goal in the game played between two sides that pride themselves on their defensive strength.

Ligue 1’s form team boasts one of the league’s form players. Montpellier are now finally starting to see the skills of Paraguayan striker Barrios.  Without a single goal in his first ten matches for the club he has turned a corner. After his hat-trick last time out his long range strike added the gloss to a 4-0 demolition of Nantes. Montpellier are sixth while Nantes continue their poor run.

Five goals in his last five outings for Guingamp, Mandanne has been proving very useful to his side. Saturday night saw him turning in another good display as he had a hand in all three of Guingamp’s goals against Breton rivals Lorient. He first sent Claudio Beauvue through on goal before finding the net himself in the second half. Finally he won the penalty that all but made it sure for his side.