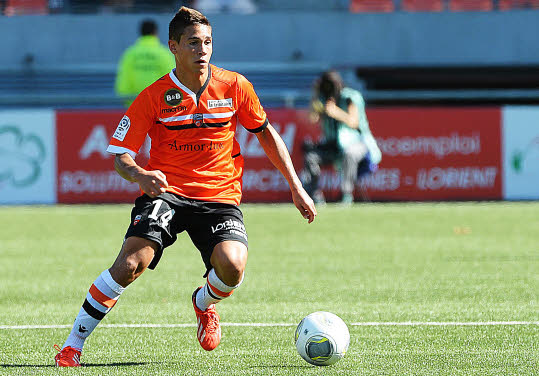 Simon Scutt with this week’s GFFN Ligue 1 Team of the Week.

In Sunday’s  massive top of the table clash Lyon and PSG shared the points but that barely tells the whole story. Lyon took the lead through a wonderful team goal to lead at the break. PSG attacked and attacked but found Lopes in the Lyon net in their path. He made a good number of saves to keep PSG at bay. He even saved Zlatan’s penalty, but the Swede was given a reprieve when, due to encroachment in the penalty, he got to take it again. Second time round Lopes was beaten and the PSG became the second team to take points from the Gerland.

Nice welcomed Nantes to the Allianz Riviera on Sunday afternoon and it was not a game that will live long in the memory. No goals and only one real notable incident when Nice had a goal wrongly disallowed for offside. Nantes have only found the net once in 2015 and never looked like doing it on Sunday.

On a very cold night in the French alps Bordeaux prevailed in the tough conditions. Bordeaux took the lead early on and held on to take all the points. Bordeaux climb up to the sixth place in the table on the back of this result meanwhile Evian remain in the drop-zone two points from safety.

Bastia took on bottom club Metz at home on Saturday night and the home side marched on with all three points. Metz were reduced to ten men after fifty minutes when Guido Milan picked up his second yellow card and thus second red card in as many matches. From then on it was all Bastia, two goals and thus the victory arrived.

Caen are flying at the moment. Four wins in a row has seen them rocket up to fourteenth in  the table. A comfortable win over Toulouse thanks to a goal either side of half time meant their visitors on Saturday are just two points above the relegation zone.

Rennes entertained Marseille on a sunny afternoon in Brittany with neither side able to claim all the three points. Both sides had chances to do just that but they just could not do so. Ola Toivennen scored his first goal since November in the first half before on-loan debutant Lucas Ocampos scored fifteen minutes after taking to the field, turning in from a corner.

Lille chalked up their second away win of the season and their first since August at Montpellier. Goal-scoring has not been Lille’s forte this season yet they were able to belie their reputation as they scored earlier on through a Nolan Roux tap in and then on-loan Rony Lopes doubled the lead in the second half.

Friday night’s game burst into life in the last twenty minutes. Saint Etienne held a two goal lead before Lens came back to take a 3-2 lead with ten minute remaining. Sainté meanwhile were able to equalise late on. Les Verts second goal came from a defensive mishap which allowed Mollo the easiest of finishes.

Lorient turned things round into spectacularly at Reims on Saturday. They were one down at half time before three unanswered goals allowed them to take home the points to Brittany. The first goal was a wonderful outside of the boot finish from Gassama from the edge of the box. Lorient’s standout performer of the season is the Portuguese wide-man Guerreiro who was at it again with a thumping 20 yard strike to give his side the lead.

Coming off the bench to great effect the lens striker Touzghar gave his side not only the point they would eventually claim but they were not far from taking all three points. A madcap second half saw the Lens man take to the field before on the hour mark his long range shot found the corner of the net. Seven minutes later he would have the chance to equalise from the penalty spot which he duly did with aplomb.