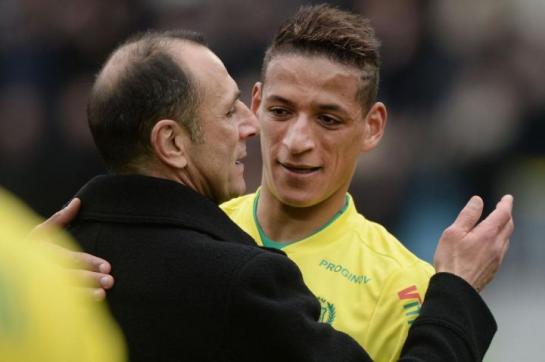 Lorient enjoy playing Bastia at home in fact, they have never lost at home to the Corsicans. Saturday was no different. Two goals, one either side of half time saw the Breton side put to an end the great run that Bastia were on, this was to be their first defeat since the 6th December. An important win for Lorient that keeps them a few points ahead of the drop-zone.

Toulouse dropped into the relegation places after the weekend’s results. This is despite a credible home draw with Saint Etienne secured with a late goal from right-back Akpa-Akpro. And what a goal it was, a strike from outside the box that fizzed home past Ruffier in the Saint-Etienne net in the 88th minute of play.

While PSG may have missed, yet again, the chance to become Ligue 1 leaders they stay right on Lyon’s heels after another draw with Monaco. Since the Monaco project arrived in Ligue 1 they have played PSG four times and each time the points have been shared. Monaco showed their class against Arsenal in midweek and again they were depleted in numbers, especially at the back, and they will be content with a point and another clean sheet.

Evian’s second away six-pointer in a row saw them secure another precious win in the fight for survival. After their win at Lens a fortnight ago Metz were defeated by Evian thanks to a bad error from Metz keeper Johan Carrasso opened the scoring, Metz levelled things up before Evian made it 2-1 with twenty minutes later.  Evian climb out of the relegation zone but still have a long road ahead of them.

Bordeaux welcomed Reims to the Chaban-Delmas and dominated the match without really looking like turning this domination into anything concrete. Two first half goals saw the teams finish with a point apiece. Bordeaux sit comfortably in seventh with an outside chance of European football while Reims are still looking over their shoulder at the teams below them.

The Ligue 1 action kicked off this weekend with a thriller at the Velodrome. Marseille were looking safe and sound at two – nil up after an hour of play. But then Caen continued their hot streak to hit back with two goals in the space of three minutes. Stalwart Nicolas Seube turned in from a corner before Emilano Sala levelled things up. Things would go from bad to worse for the home side when Nicolas Benezet fired home just before the end of play to seal a great win for Caen.

Another game featuring an impressive turnaround in fortunes was the leader Lyon’s trip up north to take on Lille. Lyon were ahead after two minutes of play but in the second half things were very different. A superb team goal with several one touch passes in the Lyon box levelled things up before Rony Lopes sublime finish saw Lille take the lead. Loanee from Manchester City, Lopes was at the heart of Lille’s second half revival to seal a terrific win.

Rennes got their first win in almost two months at Amiens against a Lens side that looks increasingly like making a swift return to Ligue 2. Neither side came into the game with a huge amount of confidence and that lack of form manifested itself in a game low on goal-mouth action.  One player to stand out was the Brazilian attacker Henrique. His superb work in keeping alive a ball on the flank followed by his cross allowed Rennes to score the only goal of the game.

Montpellier continue their challenge for European football with a decent win against Nice, their first goal came from a thumping strike from 23 year old Bryan Dabo. His wonderful control with the chest followed up by a simply unstoppable powerful shot levelled thing up. Montpellier are sixth just a point off fifth and two points away from fourth, yet they have a game in hand. Intruigingly this game is against Monaco the team who currently sit in fourth place.

Yet another comeback, Montpellier were able to turn things around after going behind to Nice at the Mosson. The winning goal was orchestrated by the Paraguayan striker Barrios. His subtle back-heel put Bryan Dabo in on goal, his attempted was palmed away only into the path of Barrios who slotted home to become Montpellier top scorer.

Nantes had to wait til March for their first win of 2015, the visit of a no doubt weary Guingamp side was just the tonic for Nantes who had substitute Bammou for the three points. He combined well with other sub Niane to fire home from the edge of the box. Nantes climb to eight after this win in a congested mid-table.