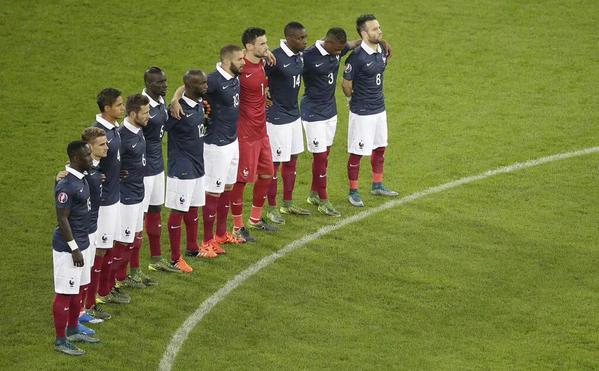 Get French Football News runs the rule on the French individual performances after Les Bleus beat Armenia 4-0 in Nice.

The captain had very little to do this evening, making barely a single save all match.

Was not fully in control of proceedings down his left-hand flank, with several Armenian crosses and corners coming from the left-hand side, but acquitted himself well going forward. His understanding on the pitch with Matuidi is also improving.

The least assured in that French back four, gifting Armenia a 2 on 1 opportunity late in the second half and misplacing several passes. Aerially however, the Liverpool man was as dominant as he could have been.

The only reason that the Real Madrid man does not earn a higher rating is simply because of the quality of opposition that he was up against tonight. Played one of the most perfect matches we have ever seen at international level.

Required consistent assistance from Lassana Diarra down his right-hand flank and his crosses were not of a high quality going forward. Also seems to be losing that ability to get back as quickly as he used to after being involved in an attacking piece of play.

There will be considerable hype about his performance in the French media and deservedly so. His exigency over 90 minutes was admirable, especially considering that this was his first return to a squad that looked utterly different four years ago. That ability to win the ball off the Armenian attacking midfield line was impeccably consistent. He was not however unstoppable and revelatory at all. Misplaced several passes throughout the first half and was dispossessed no less than five times over the course of the encounter, which actually constitutes to one of his worst performances in 2015/16. There is however no doubt that Diarra, fitness willing, is firmly planted in the Les Bleus squad debate. Quite remarkable for a man who played no competitive football last season.

Will undoubtedly be the unsung hero of the night and thoroughly deserved his exceptional goal, where he received a cross from Valbuena on the edge of the area before bending a half-volley around a defender and past the sprawling Armenian goalkeeper. Seemed liberated in a slightly higher role in the midfield than he usually plays for France, with creative passing and good defensive desire to break up Armenian attacks at source.

By his standards an average, but not awe-inspiring performance. Looks a little off his usual duracell bunny pace, having played a high quantity of matches already this season. Still was able to do his part defensively and boasted the exceptional quality of understanding that he harbours with Valbuena and Evra.

The cameras might not pick it up, but his running off the ball was exceptional today. Was targeted by the Armenians early on and subjected to a series of questionable “challenges” but remained his combative self and was France’s main outlet in terms of consistently accurate crosses.

Combined vivaciously with Karim Benzema and took his goal, through the legs of the keeper, with composure. Also showcased his frightening ability to accelerate and was the most dangerous attacking player for France, with a constant air of unpredictability about him. Has grown in confidence in that French shirt and will undoubtedly have a fantastic EURO 2016.

Importantly scored twice, ending a previously psychologically-detremental year-long goalless spell for Les Bleus. Both goals were however, for a striker of his quality, easy finishes, one a free header from a corner, the second beating the goalkeeper one-on-one. In the first half his stubbornness in terms of insisting to be involved in the build-up of play ensured that France nobody to aim at in the box, with many crosses simply being flung in the box with no purpose whatsoever. Came off with a thigh injury and now might not be involved against Denmark on Sunday.

Interestingly, the Manchester United man is going through a difficult period of form, having failed to achieve anything of note in the 30 minutes tonight and also being benched for United’s recent clash with Arsenal. He had a good chance after being supplied by Benzema to score from 6 yards but was thwarted by the Armenian goalkeeper. A little embarrassing, as he had already begun to wheel away to celebrate. Provided good solidity on the right-hand side of the pitch, but clearly not as creative as Cabaye.

Looked mostly bewildered and conservative during his half an hour on the pitch. Made a series of poor passing decisions and insisted for the most part on hugging the left-hand touchline. Not much adventure to his game aside from dumbfounding an Armenian defender in the middle of the pitch before dribbling to the tune of 30 metres and then supplying a good pass to Benzema. Looked a little confused and intimidated for Les Bleus tonight, despite showing good awareness to provide Benzema with an easy-to-execute assist for his second goal.

Moussa Sissoko, Olivier Giroud and Alexandre Lacazette were not on the pitch long enough to make an impression.