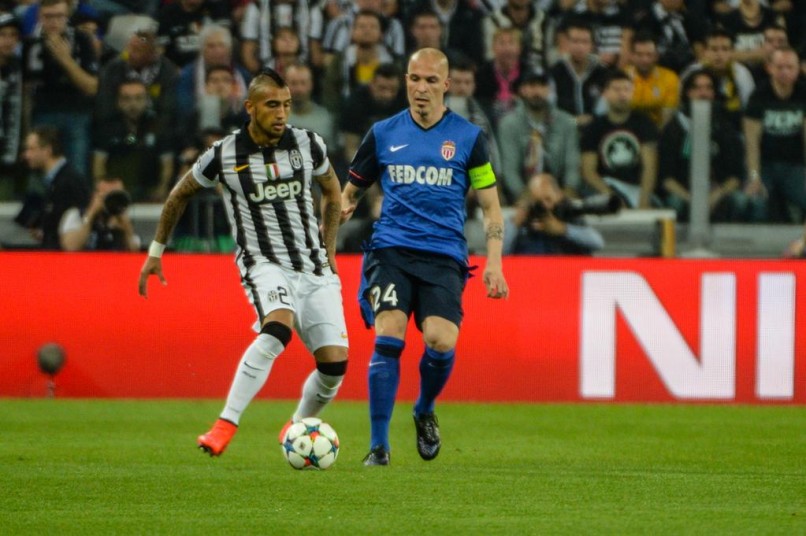 After Monaco’s 1-0 defeat at the hands of Juventus in Turin in the first leg of their Champions League tie, we give each player a rating out of 10, as well as a comment about their performance.

A good performance from the goalkeeper. Did not have many particularly hard saves to make, but did all he could to keep Juventus out. Was at no fault for the goal, as Vidal smashed in a wonderful penalty.

The captain put in a solid, if unspectacular, performance. Almost never crosses the half way line, but that was not his job, and he did well to contain the likes of Tevez and Vidal when they dropped into his position.

Looked less composed than his defensive partner, and it showed when he gave away the penalty which lead to Juventus’ goal. He was perhaps fortunate not to be sent off as well, as he looked to be the last man when he made that challenge. Begs the question whether Jardim should have gone for Wallace instead.

A very good performance from the Monaco centre back. He made a number of key challenges inside the box to deny Monaco’s strikers, and ensured that his side only head back home with a one goal deficit.

An impressive performance from the full back. He got into the Juventus half more than Raggi on the other side of defence, and was accomplished in defence also. Very little of Juventus’ play came down the right wing.

Not Moutinho’s best of games, but still assured on the ball. Monaco did not see much of the ball overall, so Moutinho did not get a chance to flourish, but he is always one of the most important players for Monaco.

A battling performance from the tall midfielder. He won the ball back multiple times in the centre of midfield for his team, and took players on with a few of his trademark driving runs. A good day out for the Frenchman.

Not starting in his usual position at right back, but did a good job in central midfield. At times struggled to cope with the fluidity of Juventus’ play, but made some crucial challenges, and was assured when he moved to his natural right-back position late on.

Probably the weakest of the starting Monaco front three. Gave the ball away in bad positions in the first half, which almost cost Monaco dearly, and did not offer too much going forwards. Will hope for better in the second leg.

Was dangerous as ever when running at defenders, but equally made some poor decisions on the ball. He missed Monaco’s golden chance in the first half when he shot right at Buffon.

Was severely starved of possession, but his pace did trouble Juventus. He created a fantastic chance for Ferreira-Carrasco, which was duly missed, and was dangerous on the ball. Dipped slightly in the second half.

Did not get too much of a chance to impress, as Monaco did not have much of the ball in the second period, but was useful in possession when he did pick up the ball.

Came on for the last 20 minutes and almost scored straight away from a corner, but was anonymous for the rest of the game.