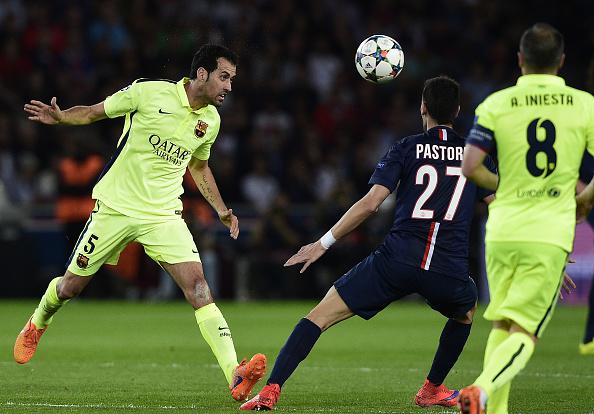 After PSG’s disappointing 3-1 loss at home at the hands of Barcelona, we give each PSG player a rating out of 10, as well as a comment about their performance.

Made a few decent saves, and could have done little about the first and third Barcelona goals, but perhaps should have saved Barcelona’s second, and Luis Suarez’s first, goal. Was let down by the players in front of him.

Was exposed positionally for the first Barcelona goal when Neymar got ahead of him and curled in the opener. Pulled a goal back late on with a deflected effort, but will most likely not be enough for PSG.

Was caught out on a pointless foray into the Barcelona half for the first goal, and got beaten by Luis Suarez for the second. Made some good challenges and interceptions but was naive in the heart of defence.

Played reasonably well until Barcelona’s second goal, when he was done by a Luis Suarez nutmeg to allow the striker through on goal. He did not learn from his mistake, and got done for a second time in a row by a Suarez nutmeg for the third goal. Perhaps not fit enough to play.

Probably the best defensive player for PSG. Handled a lot of the play well when Barcelona attacked down his wing, and got forward to a good extent to link with Matuidi in particular down the left hand side.

It was always going to be hard for Cabaye to come into the midfield against Barcelona and keep up with the speed of their play. He did a decent job and made some nice passes, but ultimately to little avail. Could have been sent off for a poor challenge on Iniesta.

The youngster was given the go-ahead to play the biggest game of his life due to suspensions, and was useful on the ball, but Barcelona’s edge in midfield was clear to see. He will take time to develop into a top midfielder, but a solid performance.

PSG’s best player tonight. Had an excellent first half, in which he and Maxwell combined well down the left hand side. Was composed on the ball and battled hard off it. The Frenchman was one of PSG’s only bright sparks tonight.

A mixed bag. Had some moments of inspiration, such as when he took on three Barcelona players early in the second half, but equally gave the ball away a little too often. Not quite consistent enough.

Was good on the ball and often succeeded in taking players on. However, he missed a big early chance to give PSG the lead when he fluffed a left-footed from close range. Still, one of the home side’s more threatening players.

Was not at the races last night I’m afraid. Missed a couple of really big chances, and gave the ball away the majority of the times he had it. PSG really missed Zlatan Ibrahimovic tonight – Cavani was not near his level of performance.