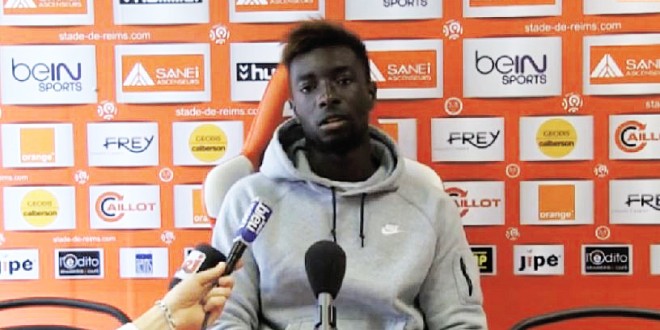 The transformation in the past six months at Stade de Reims has been nothing short of remarkable. The champagne country club looked dead and buried towards the end of last season and now, in this new 2015/16 campaign, they seem rejuvenated and renewed under Olivier Guégan.

One of the few young players promoted through the ranks over the course of the last six months has been Grejohn Kyei, an individual who has seen radical changes to his career prospects in the last twelve months.

The young French forward joined Reims in 2010 but his first year was extremely testing, with Kyei admitting that he was close to being released before constructive talks with the coaching staff about his future. A few more encouraging years followed before he was promoted to the reserve team in 2013, where he scored 12 goals in 17 appearances.

However, his time with Reims II was tainted in May 2014, when Kyei was hit with a seven-month suspension for pushing a referee in a fixture against Sedan. The Parisian-born striker told Foot Mercato that the time off the field helped shape him as a person:

“The suspension made me mature. I learned many things and I do not think such a problem will happen again in my career.”

Kyei would come back stronger and would eventually be promoted to the first team by Guégan toward the end of the 2014-15 season. Kyei took no time at all to repay the faith shown in him by scoring on the final day of the season against Paris Saint-Germain.

The striker started the move by latching on to a loose pass before playing the ball to another teammate. He then continued his run into the box and after the initial attack broke down, he stayed on the edge of the last defender as the ball was played back to him and he finished well to score past a scrambling past Nicolas Douchez.

Kyei’s late season form has seen him become a firm member of the first-team squad during the opening six games of the season. The 20-year-old came on to create two goals against Bordeaux in the opening fixture and scored in his first start at home against Lorient.

He even earned himself a game for the French Under-21s in September, scoring in the final moments of his debut against Iceland. It was a brief cameo but the forward really has impressed in all domains at the start of this season.

Kyei describes himself as athletic, powerful and technical and you can see all of those attributes in his game. He wants the ball at his feet, he loves to run in behind defenders and he has the technical ability to find a pass or score a goal.

His awareness combines with these abilities too, as shown in his assists against Bordeaux and against Toulouse. He is not afraid on using his physical attributes and he always seems to be looking to bring others into play.

All those skills were shown in his goal against Lorient too. He uses his pace initially to burst past the defender; he has the awareness and technical ability to cut back inside when the defender tracks back, he holds him off with his strength to then tidily finish into the bottom corner.

Over-hyping a talent too quickly often happens in modern football but in a small sample size, Kyei has shown at least the athletic ability to compete at this level. In addition, the aim of the “prospects” column has never been to trigger eager European sides into making a flurry of bids for a certain promising talent, but rather to earmark individuals who, with consistent game time, can become something special. As Kyei begins to grow in a starting role, it will become much clearer on where he can go in the future, but he has already earned the right to be part of the French football conversation.

Kyei said that some of his idols were modern-day forwards like Luis Suarez, Robert Lewandowski and Edinson Cavani and you can see a little of each in his play. Whether he will reach anywhere near that kind of level is unfathomable for now but if he can keep his feet on the ground, and his hands to himself, he will play a big part for Reims this campaign in continuing their early-season success and beyond.