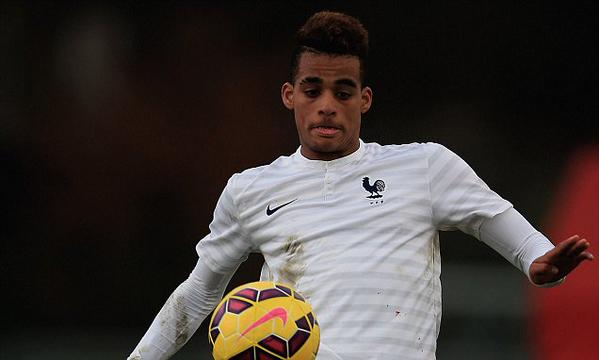 RC Lens expert and journalist Romain Scheers gives you the lowdown on soon-to-be Arsenal duo Yassin Fortuné (16) and Jeff-Reine Adelaïde (17), who will join Arsène Wenger’s men for a reported €4m this summer.

Yassin Fortuné and Jeff-Reine Adelaïde are two French youth internationals and two great hopes of the La Gaillette, the RC Lens training centre, the same centre of excellence that has produced the likes of Varane, Aurier and Kondogbia.

Yassin Fortuné was born on the 30th January 1999 at Aubervilliers. His first footballing exploits occurred at Stains, a small youth team in Paris before being spotted by this season’s National Champions Red Star. At the age of 13, he joined RC Lens with the feeling in mind that “La Gaillette is one of the best youth academies in France”.

He was not one to be taken aback in awe of the opportunity in front of him however. At the age of 15, he was promoted to the RC Lens U17 side, for just one season, before alternating for the U19s this season and Lens’s reserve team. The young forward man, who possesses great technical ability and is exceptionally creative, will now realise his dream by joining Arsenal. It has been an open secret for some time that he dreamt of playing in England. Yassin Fortuné represented the France U16s ten times, scoring five goals in the process. His profile is almost identical that of Thierry Henry, both in terms of stature and in terms of attacking qualities. Fortuné, as is often the case at an early age, has been played in a number of positions, including a forward midfield role.

He very much relishes attempting take-ons, in a very similar way to Divock Origi and Raheem Sterling. He is currently considered as one of the best young talents that Lens have at their disposal, but he will have to prove it all over again in the Arsenal youth setup.

Jeff-Reine Adelaïde was born on the 17th January 1998 at Champigny-sur-Marne. At just 17 years of age, he can already say that he is a European Champion. On Friday evening, France U17s beat Germany 4-1. The last France U17s setup to achieve this feat contained Karim Benzema, Samir Nasri and Benoit Costil in it. During the final, this youngster created several chances on goal for himself, but failed to convert them. The biggest of these came after 25 minutes where he missed a very good 1-on-1 chance against German goalkeeper Fromann.

Adelaïde began his footballing career playing for his local team, before being picked out of the rough by a relatively local side in form of Torcy. With offers from several sides in France but also elsewhere in Europe, he decided to join RC Lens’ youth academy setup.

Swift, pacey and with a frightening change of pace, Adelaïde excels at beating his man. He often plays in an attacking midfield role just behind the main forward. The youngster has 9 caps with France U17s, scoring once in the process, and one cap with the U16s. At the age of just 16, he had already played 7 games of the reserve team on top of his matches with the U19s. This season, Lens boss Antoine Kombouaré, in charge of the first team, called him up the the first team squad in the 33rd game of the Ligue 1 season against Metz. He sadly did not feature during the match.

If the qualities of both of these youngsters is undeniable, nobody can predict their futures. The two players will join the famous English club on a three season deal and should, if all goes well, soon become a part of the Arsenal U21s. A truly fantastic creator of young footballing talent, the funds that RC Lens gain from these two transfer should help them to refill the coffers.

On the other hand, RC Lens are letting two of their most promising talents go before the fans even get to see them in action. A sad reality of the times.