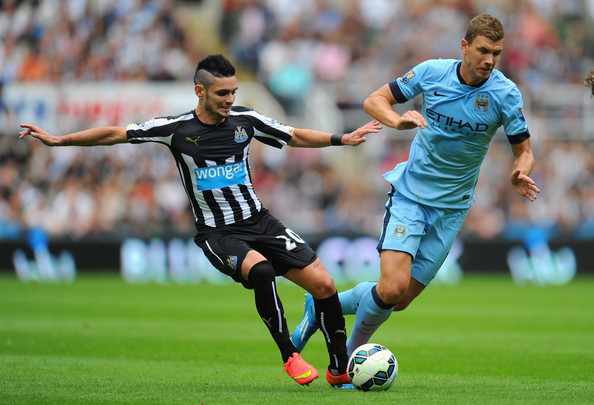 Eric Devin explains just why the loan signing of Rémy Cabella is the perfect opportunity for a fresh start for Marseille.

A brief Internet search on Remy Cabella will return any number of scouting reports, prospect dossiers, or rants on why he is perfect for a given club. Reading through them, one is given the impression of a bright, aggressive player who is a real handful either as an attacking midfielder or cutting in from the wing, able to use his close control, passing and powerful shot to threaten opposing defences in a number of ways. Amazed at the ability of this supposedly unheralded player, one then checks the dates of the articles and sees that the vast majority of them predate the player’s £12M move from Montpellier to Newcastle.

Originally a winger upon his arrival in the first team four years ago, Cabella was forced wide owing to the presence of Younes Belhanda in the side, not making the playmaker’s role his own until the Moroccan international departed for Dynamo Kyiv in 2013. With little competition for his preferred central role, after notching an impressive 14 goals and 5 assists for a team that struggled for goals away from his own, Cabella was always going to be hot property, and the wages available in the Premier League, as well as a hefty price tag were too much for the club and the player to ignore. The situation with Newcastle was an attractive one as well, with little in the way of creative talent as competition.

However, despite Newcastle’s reputation for showcasing French and French-based talent, (Yohan Cabaye, Moussa Sissoko, Mathieu Debuchy etc.) things never really clicked on Tyneside for Cabella. Often used on the wing with Sissoko played through the middle, Cabella lost none of the considerable dribbling skills or shooting ability that had earned him his move.

However, with Papiss Cisse and Sissoko the focal points of the attack under both Alan Pardew and John Carver, his opportunities to express himself were limited. In his final season at Montpellier, Cabella was masterful in attack among a fairly limited group of teammates, yet when relegated to a supporting role in England he struggled, losing his prominence among Didier Deschamp’s international squad and failing to get on the scoresheet as he had in France.

Now set to join Marseille on loan for the rest of the season, as part of the Newcastle’s purchase of Florian Thauvin, with a potentially appealing €9M option for making the deal permanent, Cabella is being presented with the opportunity to be the primary attacking force on a team with under-talented or still-developing teammates, a similar situation to two years ago at Montpellier. While Newcastle had likewise seemed an appealing destination, there are a myriad of reasons why a return to France’s south coast will suit Cabella’s game better than his time in England.

The first, and most obvious reason is that he will be afforded the chance to play his preferred position, following in the estimable footsteps of Dimitri Payet. While Payet enjoyed one of Ligue 1’s most prolific seasons last year as an attacking midfielder, and Cabella has not yet shown himself to be this type of creative passer similar to Payet, there are enough similarities in their games to believe that Cabella has the potential for a big season.

Like the former Lille player, Cabella is a tremendous dribbler, has a ferocious shot and is also a dogged defensive performer when called upon. Under Marcelo Bielsa, the efforts of Payet did much to shield an aging Alaixys Romao from Ligue 1’s most talented attackers. This season, with albeit a small sample size and the dynamic Giannelli Imbula having moved on, Romao has looked woefully exposed, his previously assured passing gone astray and his dismissal from Saturday’s loss to Reims the perfect example of the type of sloppy tackling which could jeopardize Marseille’s hopes of sustained success.

With Cabella able to do considerably more than the likes of Florian Thauvin or Abdelaziz Barrada to shield Romao or whichever of Marseille’s midfield gambles take their place in what appears to be a continuation of Bielsa’s 4-2-3-1, not only are his attacking talents well suited to OM’s personnel and system, but his defensive determination is as well.

The other primary factor which will likely work in Cabella’s favour is that he will be, as he was at Montpellier, the most talented and proven of his teammates, at least in attack. Romain Alessandrini has had his moments, especially during his time at Rennes, and new arrivals Bouna Sarr and Georges-Kevin N’Koudou were bright spots for somewhat dour sides last year. Michy Batshuayi likewise is a considerable talent, but, like the departed Thauvin, none have proven themselves capable of carrying a team as Cabella did during what was essentially a relegation scrap for Montpellier in 2013-14.

Not that I am predicting Marseille for that kind of season, but should other key performers (Nicolas N’Koulou, Steve Mandanda) finally have had their fill of the club’s inept management, the ability to call upon an experienced and talented player with something to prove as regards his international future may end up being more important than the club would prefer. With the European Championships fast approaching and Cabella 26 years old before the season is over, this just may be the ideal situation for two parties with much to gain and little to lose.