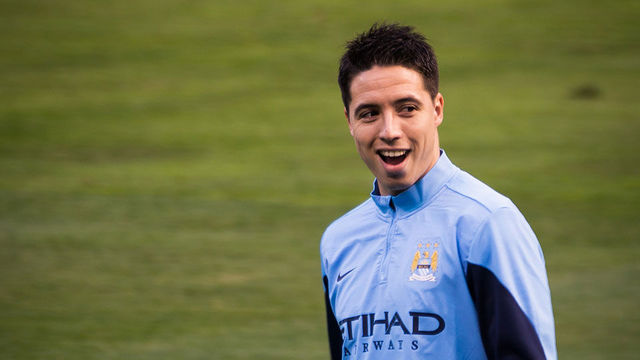 In an exclusive interview with RMC, Manchester City’s attacking midfielder Samir Nasri has responded to allegations that he offered to act as an intermediary in the blackmail of Mathieu Valbuena, with the blackmailers allegedly using a sextape of the Lyon player to do so. The interview below.

Samir, you name has been cited in the investigation concerning the blackmail of Mathieu Valbuena affair. What is your reaction?

First of all, I am not aware. I would like to know what exactly has been said. Yesterday, someone from the newspaper “Le Monde” contacted me for a reaction. I said to him what I had thought. But I have not been able to see what has been said.

You allegedly had knowledge of the process of the blackmail of Mathieu Valbuena. The latter has told Le Monde: “My relationship has always been difficult with Nasri. Now, nothing surprises me…”

The fact that he is putting me in this situation… I will have a discussion with him. Honestly I do not give a shit about this sextape story. It is not my problem, not my situation. If he wants to mix it all together because I know people who have been cited and if he is saying that I wanted to be implicated, it is his right to think that.

In any case, he has no right to dirty my name or to cite it if I am nowhere. He could have seen that there was not a single wiretap that concerned me. I do no speak to the people concerned.

Are you talking about Mustapha Zouaoui and Axel Angot, the two people who gravitated around the Marseille players?

Yes, I know Mustapha Zouaoui. I grew up in the same place as him. He knows my family but we have not spoken for eight years. I therefore do not see how my name could have come up in this. And Axel, I knew him practically at the same time as Mathieu. He looked after everything technology related.

It is he who trusted them, who had a relationship with them and he is the one who has been duped. In no case do I want my name to be associated with them because I do not speak to them. My name has nothing to do with this case.

If they had come up with a plan to bring out names and mine because they know me, that reflects on them. But that Mathieu does not put me in it. I have never called him. I do not want him to put my name into this situation.

Are you aware of the existence of this sextape?

I knew about it in August or September. But a lot of people new about this situation! Djibril warned him a year ago!

Have you received a convocation from the investigators?

No, nothing at all. If my name is really cited in this case or if I had been implicated in the wiretaps, I think that they would have already called me up. There is no free pass in this affair. Karim Benzema plays for Real and he was called up.

When Mathieu Valbuena says that he has always had a difficult relationship with you, what does that make you feel?

It does not surprise me. If he wants to make himself look like the victim, there is no problem. In this situation, he is the victim, but he must not bring my name out. We are not friends. We will never be. But other people’s misfortune does not make me happy. I have other things to think about than his sextape situation. But it is good to know that he speaks like that. I will talk to him.

Would could you have gained from being an intermediary?

We shouldn’t speak about an intermediary because I am not implicated. What would I do in a sextape affair? I have done very very very well for myself. If a friend really needs money, I give it to him. If he needs 50k or 100k Euros, I will give him the money because he is my friend. Everyone choses their own life. I am footballer. I am neither a thug, nor an intermediary, nor a blackmailer, nothing at all. These are not my stories. I want to already recuperate from my injury and to try and play again for Manchester City.

A final word on the French national team. Is EURO 2016 an aim of yours or do you think that your international career is over?

It is truly not my aim. My decision has been taken. My relationship with the coach is far from ideal. And even if I was available for selection and if I had not taken my international retirement, it would be good if I can come back (from my injury) in April. So for the Euros, it is simply impossible.