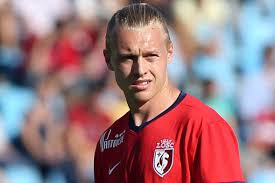 Lille central defender Simon Kjaer will have a medical with Turkish giants Fenerbahce today ahead of a €10m move.

If the medical tests go smoothly, the player will be announced as a Fenerbahce signing at 13:00 GMT today, according to Danish publication Tipsbladet.

The deal will see Kjaer become the highest paid member of the Danish national team, with the former Wolfsburg man already quoted by Turkish media outlets saying that Istanbul is a wonderful city and that his family will settle in well in this part of the world.