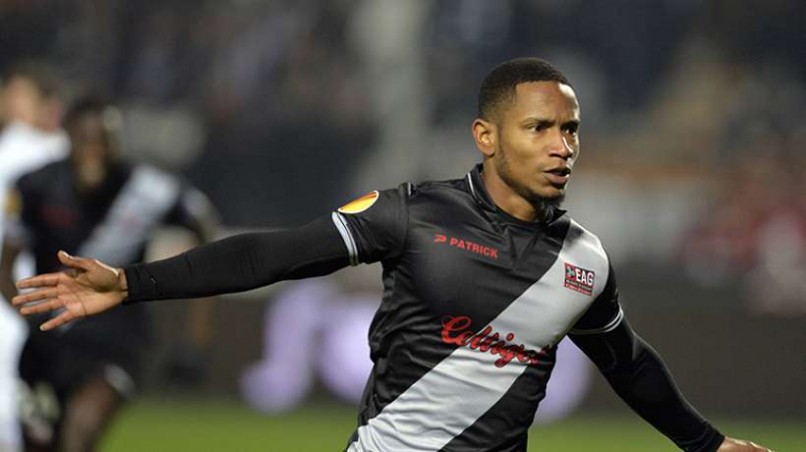 The announcement that Claudio Beauvue will be leaving EA Guingamp in the summer is not necessarily a surprise given the striker’s fine form across all competitions, but since England seems a more likely destination at this juncture than another Ligue 1 side, perhaps a word on what France could be losing is appropriate.

The numbers tell the story: fifteen goals in the league, five in domestic cups and a further five in Europe. But what doesn’t come across in goal-scoring totals is the presence and dynamism that Beauvue displays, qualities that have seen him variously linked with West Ham and Everton in the Premier League, England and its wages the likely destination for a player that just turned 27.

Quite pacy for his physical presence, and also adept at drawing fouls, Beauvue had previously been used on the wing in Jocelyn Gourvennec’s 4-4-2 since arriving from Chateauroux. At Guingamp, the role of a wide player is one that requires quite a bit of work in terms of tracking back and few scoring opportunities. Early in December, however, the diminutive winger was moved up top to partner the even smaller Christophe Mandanne, and the pair responded by combining for five goals in thrashing Caen. While playing with such a small set of forwards as a two would seem to go against conventional wisdom, at the time, Guingamp were 20th and exhausted from a grueling Europa League campaign, and Gourvennec felt a change was needed.

On the night, Caen struggled, and even some five months later, defences are as yet unsure how to cope with the pair’s pace and physical power. Starting with that Matchday 16 encounter, the pair have combined for 21 league goals, a figure second only to the 22 of Alexandre Lacazette and Nabil Fekir. Since the 16th game of this season, Guingamp are level on points with Saint-Etienne in fourth place, the duo’s abilities key to an unexpected run of form.

While obviously different in terms of how he is used, Fekir is an interesting jumping-off point for considering the rate at which Beauvue draws fouls. Fekir, of similar body type to Beauvue, but obviously a better passer, has been used as part of a front two as well this season, despite his size, and has encountered similar success. Both players are able to hold off defenders or run by them, a dangerous mix that often ends up with their opponents hacking them down, unable to cope in any meaningful way.

This is important, because, as a team, Guingamp average a paltry 6.4 dribbles per match, a figure that ranks them next to last in the division. They also, however, rank sixth in fouls suffered per match at 14.3, a ratio of nearly 2.5 to one in a league where no other side even operates at 2 to 1, much of this down to Beauvue, who leads the team at 2.2 fouls suffered per match. While Guingamp are regrettably not the most prolific from set pieces, they are one of Ligue 1’s better sides at earning penalties, with six to date, showing the benefits of playing such a physically strong yet pacy player through the middle.

A threat in the air as well as on the ground, Beauvue is arguably the league’s best player at winning aerial duels relative to his size, his 3.1/match bested only by a cadre of bigger target men and centre backs. In addition to his physical attributes, however, the striker is also remarkably accurate with his shots, a necessity at the top level. On target 56% of the time, a rate that ranks fourth among strikers with at least two attempts per match, the compact forward has slowly built himself into a well-rounded attacker whose past as a winger and present as a striker speak volumes to his intelligence, opportunism and versatility.

With Guingamp next traveling to Paris Saint-Germain on Friday, a rare opportunity exists to see one of Ligue 1’s finest in action, and keen observers would do well not to miss one of the division’s best as he enters what are likely to be his final few matches. Whether or not Beauvue can make a difference against the defending champions remains to be seen, but given the last five months, one wouldn’t bet against it.