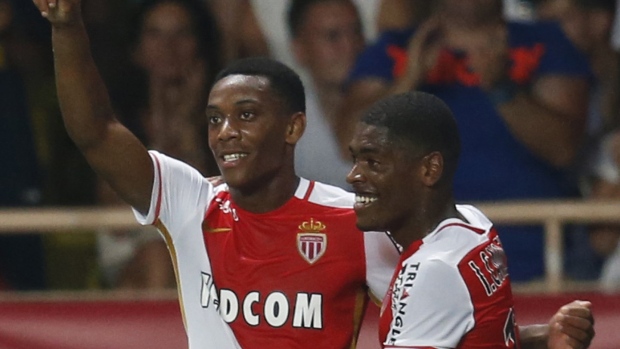 Eric Devin assesses the impact on Ligue 1 of Anthony Martial’s big money move from AS Monaco to Manchester United.

Finally, what is the affect of Martial’s move on the league as a whole? This can be looked at in a number of ways, but the two of primary importance are: 1) how it is (or isn’t) emblematic of what seems a one-way flow of talent out of Ligue 1 and what the effect of said flow is on the league internally and 2) how it affects the division with regard to Europe as a whole.

For the first, the transfer fee paid for Martial is far from historic in terms of French sides. In the past decade, Michael Essien, Karim Benzema and James Rodriguez have all departed Ligue 1 clubs for eye-watering fees relative to their accomplishments to date and youth.

There is no way Monaco could have refused the money, and they were right to sell Martial, especially given their elimination from the Champions’ League.

However, what is more instructive in the effect of the transfer on the league as a whole is the difference between the departure of Martial to England and similar moves for other clubs.

The fee commanded for Martial (and Geoffrey Kondogbia, Layvin Kurzawa, Aymen Abdennour and Yannick Ferreira Carrasco for that matter) dwarfed any other fee received in the league, Giannelli Imbula’s €20M move to Porto being the highest fee commanded by a club aside from Monaco.

Monaco then in turn used this money to buy a massive number of players, most of them on the young side, to replace their departed stars. In came Adama Traore, Thomas Lemar, Corentin Jean, Allan Saint-Maximin and Fares Bahlouli, all of them from fellow French sides. Sure, there were a host of other arrivals, but each of these acquisitions from within the division has, in turn, a knock-on effect.

Let’s use Lille as an example. Over the summer, they sold Traore, Simon Kjaer and Idrissa Gueye, all players who had been integral to the team’s success. Traore is still young and developing, but had shown considerable talent when used, while Kjaer and Gueye were automatic selections in last year’s first eleven.

The sales of the trio netted Les Dogues  a not inconsiderable sum, something in the neighbourhood of €30M. It would seem, given that Lille are perpetually in or challenging for the European places in France, easy enough to bring in replacements for the three, as €30M should net some very talented players, even if spread among four or five players rather than the departed three.

However, because of the rules in France surrounding financial solidity, strictly enforced by the league’s DNCG, not all of that money can be re-invested directly into transfer fees.

If the club had operated at a loss, any money gained by selling players would first have to be applied towards outstanding debt, at least in part, before being re-invested. Lille’s new stadium, for example, while largely funded by the city government, is partially funded by an annual €7.5M contribution from the club.

Add to this the cost of improvements to training facilities and the cost of re-negotiating current contracts, and what had seemed a fairly large sum begins to look less impressive.

While Gueye and Kjaer were fairly established players and likely on relatively high wages, Traore’s youth meant that he wasn’t on comparable money. Thus, some additional part of that €30M figure would go towards the salaries of new players.

Eric Bautheac, for example, was a relative snip at €2.4M, but he surely required a pay raise to be enticed to the north away from the Riviera, especially as the club could not offer guaranteed European football, but merely a slightly higher standard.

Thus, aside from Bautheac and a few older players who arrived on free transfers, (Renato Civelli, Mounir Obbaddi) the club were restricted in both the wages that they could offer and the transfer fees which they could afford. Lille brought in a raft of intriguing talent, including Lenny Nangis, Sehrou Guirassy and Yassine Benzia, all French youth internationals.

However, because of the combination of transfer fees and wages that would be necessary to attract a ready-made replacement for the likes of Gueye, there is little alternative for most clubs aside from the very top.

Even Marseille, with its vociferous home support and proud traditions, was unable to operate as it would’ve liked, forced to make do with a patchwork of loan deals and youngsters, ending the summer window in a most unsatisfactory manner.

The knock-on effect for clubs lower down the ladder is even more pronounced, obviously. How do Nice replace a Jordan Amavi, or Nantes a Jordan Veretout, lacking any real shot at European football and with limited means?

Occasionally a club like these can rise up, if circumstances conspire just so and achieve some modicum of success, as Montpellier did in winning the title in 2012, but those occasions are far and few between, especially with Paris Saint-Germain in the picture.

Thus, unless a club is, like a Monaco or a Lyon able to consistently turn over players for high-dollar amounts, they have little option but to scratch for bargains among young players or lesser European leagues.

Monaco aren’t guilty of anything by selling Martial, but what the money they received for him represents for the rest of the league and both its competitivebalance and its continuity is a vexing issue nonetheless.

Tied into this is how these sorts of moves affect French clubs’ ability to compete in Europe. UEFA’s coefficient system is both byzantine and bizarrely applied, and through its machinations, the recent past has not been kind to French clubs.

Through the 2000s, with Lyon a consistent force in Europe, along with Marseille and Monaco, France generally had three solid teams to offer the Champions’ League, and were consistently among the top four or five leagues in Europe.

However, with UEFA creating the Europa League, things have changed dramatically, with the club firmly ensconced in sixth, Portugal having passed them up in recent years on the back of Europa League success from Porto and Benfica.

Given that squad depth isn’t a strength of most French teams and also given that for every club, maintaining or improving upon one’s league position from year to year is the primary objective, perhaps outside of the lucre of the Champions’ League, UEFA’s second-tier competition has taken a necessary back-seat for most French clubs.

Sure, Lyon reached the quarterfinals two seasons ago, and Bordeaux also had a bit of success as well, but on the whole, a result like Les Gones  going out to the seventh-placed side from Romania was much more the status quo.

With the aforementioned financial restrictions in place, and needing a place to develop these youngsters, clubs from the upper half of the table in France will often use the Europa League to give them experience, with predictably disastrous results.

How does the sale of Martial affect this, you might be asking? Well, with clubs such as a Saint-Etienne or a Bordeaux forced to sell key players (Max-Alain Gradel, Mariano, Franck Tabanou) on the back of successful seasons, that aforementioned knock-on effect rears its ugly head.

Even as both Christophe Galtier and Willy Sagnol appear to be taking this year’s competition fairly seriously, the struggles of both in the league may force them to reconsider, sending squads of back-ups and youngsters out on Thursday nights.

Indeed, it wouldn’t be inconceivable to see only Monaco advance from the group stages, giving further opportunity to the likes of Ukraine or Russia to pass up Ligue 1 in UEFA’s association rankings.

Were that to happen, the league would lose its third Champions’ League spot, and with it a significant potential source of income that -isn’t- derived from selling players. Again, Monaco certainly made the right decision with Martial, given the fee, but the potential ramifications in France reach much further than the Stade Louis II.