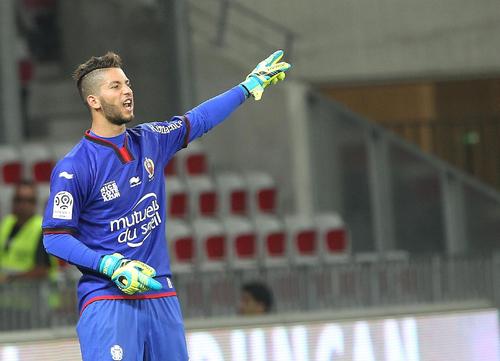 Talking Points columnist Eric Devin takes a look at a fresh faced France U21s side which is dealing with the disappointment of the previous squad’s inability to qualify for two major tournaments, notably the 2016 Olympics.

With their embarrassing elimination from Euro 2015 at the hands of Sweden behind them, Pierre Mankowski’s French U-21 side can begin to focus on 2017’s edition of the tournament, to be held in Poland. The latest squad is limited to players born in 1994 or later, so key members such as Paul Pogba, Samuel Umtiti, Paul-Georges Ntep, Layvin Kurzawa and Florian Thauvin have aged out of the squad. However, as is so often the case in France, several exciting younger players who have already impressed in Ligue 1 have received their first call-ups, ready to replace those departed.

Lenny Nangis of Caen, Baptiste Aloe of Marseille, Mouez Hassen of Nice and Nantes’ Georges-Kevin N’Koudou are all uncapped as yet at U-21 level, and a few words on their potential are warranted, based on their league participation thus far. Even though qualification for Poland does not start until September, these friendlies against Estonia and the Netherlands are the last scheduled time the squad will gather before then and a bright performance in one or both matches could well be a springboard to a regular place for any or all of this quartet.

With Alphonse Areola having aged out of the squad, the opportunity for Hassen is massive. After having beaten the more experienced duo of Joris Delle (who was admittedly injured) and Simon Pouplin for the starter’s job at Nice, earlier in the season, while he was left back for the side’s recent trip to the Stade Gerland, he has started the majority of Les Aiglons’ matches, managing to keep eight clean sheets in the process.

While still unsteady at dealing with crosses and nowhere near the reflex ‘keeper that Areola is, Hassen has also had to deal with a lack of continuity from his back four. While Romain Genevois has generally been assured in central defence, his partners, the aging Souleymane Diawara and Mathieu Bodmer have often disappointed. Add to this the side’s penchant for red cards (six on the season), and one can see how while the raw statistics (32 conceded in 26 matches) may not indicate a top-level ‘keeper, at 19, Hassen’s achievements are impressive, and he should be Mankowski’s choice in net going forward.

Hassen’s quest to be a building block for the squad will be aided by what is sure to be a solid defence. Aymeric Laporte, despite nearly 100 appearances for Athletic Bilbao is still only 20, and he will be the side’s captain.

Among several options to partner the Basque is Marseille’s Baptiste Aloe, who, having been ignored since a pair of U-18 appearances more than three years ago, is now finally once again a part of the youth setup. Not the most refined in the tackle, Aloe also can look at sea when trying to keep quicker players in front of him. With Nicolas N’Koulou missing due to injury, that Aloe has featured at all for l’OM is somewhat of a surprise, but what he lacks in positional awareness and tackling ability, he more than balances with relentless energy, eager to cut out a cross or clear a free kick.

This energy, while coltish and nervous, has made him a favorite of Marcelo Bielsa, and it is easy to see why the Argentine values his presence. While mistakes are still present in Aloe’s play, with less than 500 minutes played in the league, this is only to be expected. These mistakes can serve as learning experiences, and his evident enthusiasm for the game and aerial prowess can make him an ideal partner for the more elegant Laporte over the next two years.

On the offensive side of the pitch, Nangis and N’Koudou are more polished players at present than their defensive counterparts. N’Koudou in particular has been impressive, as his manager, Michel Der Zakarian, plays some of the most intense pressing football in Ligue 1, with the wingers in particular bearing a great deal of defensive responsibility. Just 20 last month, N’Koudou has made 22 appearances for the Canaris, limiting the involvement of more accomplished players such as Alejandro Bedoya and Vincent Bessat.

A live wire with the ball at his feet, but perhaps in need of bit more prudence when it comes to his passing, N’Koudou’s energy and nose for goal have been invaluable to Nantes this season. Were he to be freed from the somewhat onerous defensive duties required at Nantes, it is entirely possible he could blossom even further, but even with that being said, a bright future is in the cards.

Nangis, for his part, is vastly more experienced than any other member of Les Espoirs save Laporte, having made his first appearance for Caen back in the 2011-12 season and already pushing 70 appearances for the club. While still used sparingly in their successive Ligue 2 campaigns, this season’s return to the top flight has seen the player become first choice for Patrice Garande, used on the right of a 4-3-3. While similar to N’Koudou in looking to get at the defense with the ball at his feet or beat a full back to a long ball, Nangis, playing in a freer role than the Nantes man, is also much more flamboyant and audacious. Some of the goals he has scored this season beggar belief and display a great imagination.

Also like N’Koudou, (perhaps even more so) Nangis’ end product is not always there as regards his passing, but his bravado in terms of taking on a shot, no matter the situation, provides great entertainment. While some of Nangis’ aggressiveness may be down to the go-go style that Garande favors, if he can display a more patient approach in his passing, combining that with his already evident scoring ability could make the youngster a bonafide match-winner.

Olivier Giroud: “I am in the best form since I arrived at Arsenal”