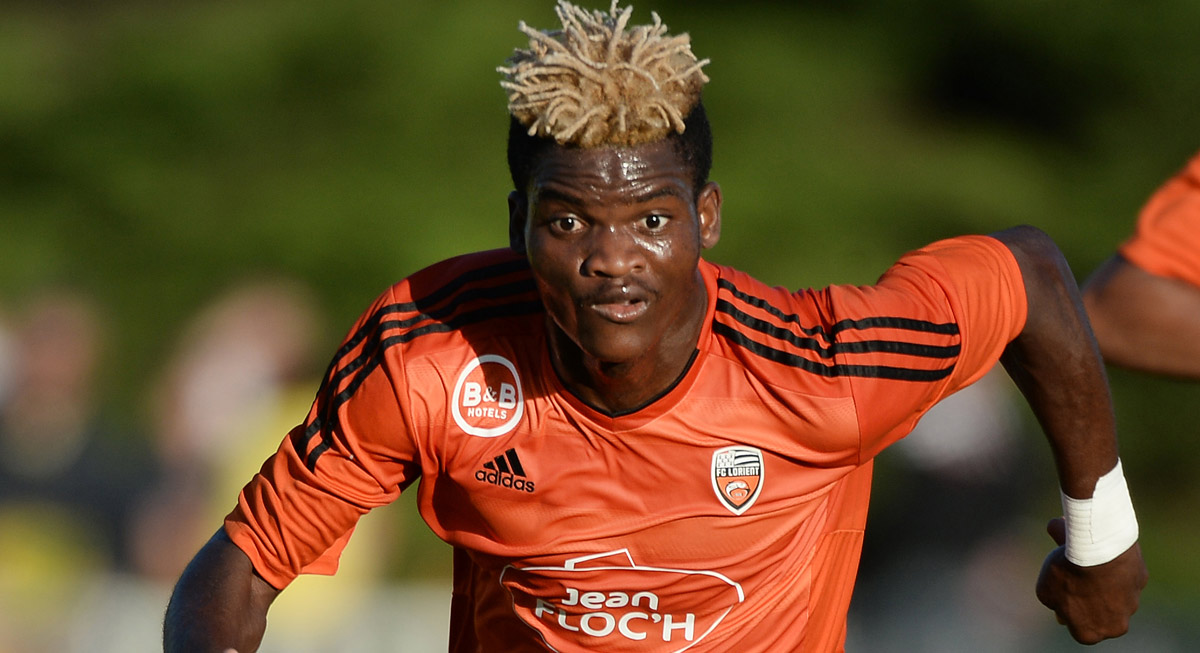 The following piece was written in December 2015 and published on the 1st January 2016. Didier Ndong was a new entry and ranked 97th in our index out of French football’s 100 best players in this year’s Get French Football News 100.

To fully understand how successful a 2015 Didier Ndong enjoyed, you just have to compare where he was at the turn of the year with where he was at the end of 2015. At the beginning of January, the 21-year-old midfielder was turning out for CS Sfaxien in Tunisia.

By December, he had established himself as a fully fledged member of the Lorient starting eleven and one of Ligue 1’s hottest prospects.

His transfer to the French side was confirmed on the third of January, but Ndong himself was unable to make the move immediately, as he had the small matter of an African Cup of Nations tournament to compete in with his native Gabon.

Having made his senior international debut in November 2012, aged just 18, Ndong played an important role during Gabon’s short tournament, appearing in all three of their fixtures.

The youngster played the opening hour of their first two games, a win over Burkina Faso and a loss to Congo, before playing the final 21 minutes of his country’s 2-1 loss to Equatorial Guinea as they finished third in their group.

Only then was Ndong free to finally join up with his new team in France, albeit with a wealth of international tournament experience in his pocket. Sylvain Ripoll was understandably patient with the youngster in his first weeks at the club, leaving him on the bench against Montpellier, before bringing him on for his debut with 20 minutes to go away at Reims in early February. Further short cameos followed against Bastia and Evian, before Ripoll handed him his first full start against St Etienne at the start of March.

However, it was a match to forget for the young midfielder, who was sent off for receiving a second yellow card after a nasty two-footed lunge on Benjamin Corgnet in the 68th minute. Lorient lost control of the match from that point, as St Étienne went on to score twice and take all three points.

It was a tough, bubble-bursting lesson for Ndong, especially so early into his career in France, but his play up until that point had been bordering on dangerous and sending him off was the only real option the referee had to curb his recklessness. Ndong served his suspension and was soon establishing himself in the Lorient team again, so much so that he played the entirety of each of Lorient’s final seven league games of the season.

And he certainly picked up where he left off after the summer break, as Ndong went on to play 90 minutes in all but one of Lorient’s league games in the opening half of the 2015/16 campaign, missing only the goalless draw with Lyon on the opening weekend.

Over the last six months, it has become clear to see that Ndong has grown as a player and as a character on the pitch and he has now firmly cemented a starting spot in Lorient’s central midfield, mainly as the most defensive minded of the group.

However, he has also shown an eye for goal at times, scoring against both Monaco and Troyes so far this campaign. His first was particulary notable, not just because it was his first for his club, but because it was a spectacular strike from 35 yards out to open the scoring in a game Lorient would go on to win 3-2.

Having picked up the ball from Romain Philippoteaux, Ndong took one touch before firing an absolute pile driver past Danijel Subasic at the Stade Louis II. His second of the season came in another win for Lorient, 4-1 at home to Troyes, as he finished off a swift counterattacking move by collecting the ball in the box and firing past the keeper.

It is clear to see why he has become such an important player for Lorient; his drive, passion and energy make Lorient a hard team to overrun in the middle of the park.

Ndong is particularly good at reading the game and being in the right place at the right time to make interceptions and break up play. And as shown by his goal against Monaco, his long shots are not half bad either. The one glaring weakness in his game right now is his rashness.

The youngster has a habit of jumping into tackles and his hotheadedness has seen him get involved in numerous tussles and disagreements on the pitch. Whilst this is all involved in the work of a defensive midfielder, Ndong needs to learn that some arguments just need to be forgotten and that sometimes staying on your feet is the better option.

However, these are all things that will improve in time and with more experience. Overall though, Ndong has had an extraordinary year, and if he keeps up his current level of progression, he could end up as an exceptional player.

THE VERDICT | Can Sofiane Boufal take Southampton to the next level?

David Luiz headed to London ahead of Chelsea move