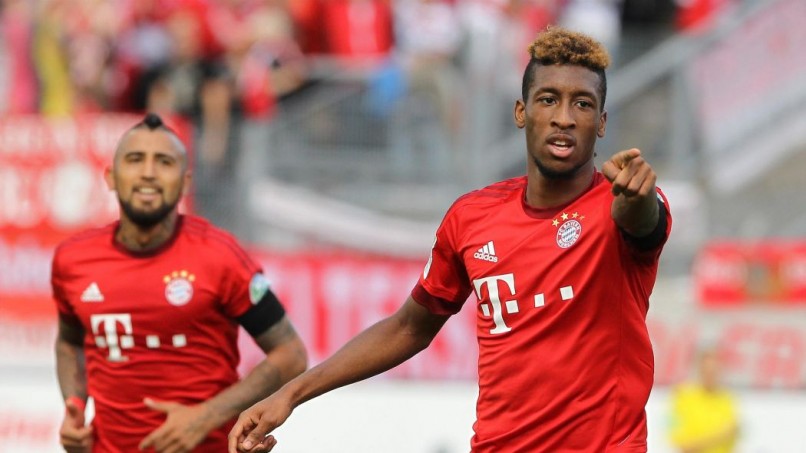 Didier Deschamps’ naming of his squad to face Russia and the Netherlands surely isn’t the final word in terms of who will become a part of the group to participate in this summer’s European Championships, several players who were excluded and included this past Thursday may have a clearer idea of their summer plans.

With that in mind, here is this week’s Euro-Bleu Tracker, which largely focuses on players selected for the two matches, with an eye towards the security of their place in the squad.

Another week, another 1-0 win for Leicester City as they chase a historic Premier League title. The kind of grit and focus that is needed to win close matches under pressure is ideal for a tournament setting, and the way that Leicester and Kante are going right now, the diminutive former Caen player has a great chance not only to be included but to be among Deschamps’ first choice eleven.

Kingsley Coman, still just 19, continued his fine run of form, potentially demonstrating that, he, too, deserves a place in the starting eleven. With a fine cross for Thomas Meuller’s later equalizer in the Champions’ League and a sublime goal as well, Coman’s ability to be a force on the right wing means that his spot on the team is probably all but secure, especially given the magnitude of the match

While West Ham as a club must be kicking themselves for not being able to finish of Chelsea when they had the chance, a draw at Stamford Bridge is still a creditable result. The team now find themselves firmly in the grip of the race for fourth spot in the Premier League, and with it, Champions’ League football. Payet has been at the heart of much of the club’s success this season, and his combination of ability and versatility mean that Deschamps has been forced to welcome the player back into the fold, deservedly so.

The prolonged absence of Wayne Rooney would have given Anthony Martial a more prolonged run as a center forward, but for the emergence of fellow youngster Marcus Rashford. Rather than taking the academy product’s emergence as an affront, however, the young Frenchman he has generally responded with aplomb. Shaking off a hamstring injury that dogged him through February, Martial turned in industrious performances on the left wing, suggesting that he and Coman could well make Antoine Griezmann the senior member of Deschamps’ front three.

At this point Umtiti must be wondering what he has to do to become a member of the senior squad. With Jeremy Mathieu picked over the Lyon youngster, despite another creditable performance, there appears to be no clear path into Deschamps’ good graces, despite he and Mapou Yanga-Mbiwa finally looking like an accomplished center back pairing.

Were Layvin Kurzawa to be less caustic, he would probably occupy this spot, given his talent far outweighs that of the form Lille player. That being said, Digne has quietly had a fairly consistent season in the Italian capital, and with a marked uptick in Roma’s form under Luciano Spalletti, his place is warranted. There still must be some trepidation, though, given Digne’s lack of experience and the age of Patrice Evra, but he is nevertheless the “safe” option here, barring some disastrous performance over the next week.

Jallet hadn’t been in poor form before being sent off against Lille a month ago, and while he had battled injury as well, his substitute appearance against Guingamp seemed to signal an impending return. Lyon are in a fierce battle for the Champions’ League, and Jallet probably just about deserves his spot given his consistency since joining the team. That said, if he fails to reclaim his starting spot from Rafael, might Deschamps be forced to look at other options at the position?

It is perhaps unfair to lay too much blame at the feet of Mathieu for Barcelona’s dropped points at El Madrigal this weekend, and one can see the point of his inclusion should something happen to Patrice Evra, given his ability to deputize at left back. After all, is Deschamps really ready to trust Lucas Digne at a major tournament? That said, given Mathieu’s age, spotty form for Barcelona and the wealth of other, younger, options at center back, might the manager be better using this spot giving tournament experience to a younger player?

While N’Golo Kante’s Leicester have hoovered up the headlines in England of late, another unfancied club has made a big move in the table. However, in Crystal Palace’s case, the move has been in the wrong direction, having failed to win a league match since successive victories over Stoke and Southampton in mid-December. Cabaye, so influential earlier in the season, has seen his star dim, his inclusion in the squad more down to his experience and creativity than his form at this point.

A sure thing for the 23-man squad, and a contender for the starting eleven, the summer’s move to the bright lights of Old Trafford seemed the ideal tonic for Morgan Schneiderlin. Instead, the former Southampton player has repeatedly seen himself benched for the likes of an aging Michael Carrick. With the consistency that the likes of Lassana Diarra and Kante have showed this season, the door may have just about closed on Schneiderlin for the time being.

Spartak Moscow in negotiations with Nantes for midfielder Abdoulaye Touré

Mbaye Niang has no interest in West Brom

Dijon interested in a deal for Jean-Pierre Nsamé (Young Boys)