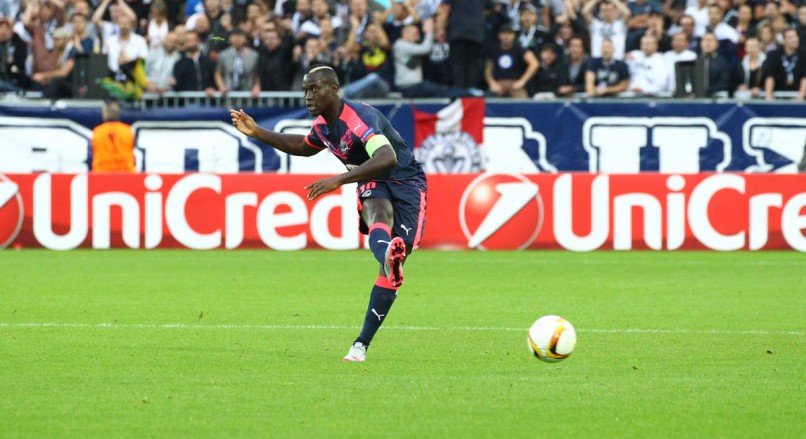 Despite a bright start to his Bordeaux career upon arriving from Senegal, the last few seasons have seen the career of Henri Saivet drift considerably. The club’s youngest-ever professional player, he was duly rewarded with plenty of chances in the first team under the likes of Francois Gillot after finding opportunities hard to come by in the club’s most recent run of success, under Laurent Blanc.

Last season was marred by injuries and time spent at the Cup of Africa Nations, and with the arrival of Clément Chantôme last January from Paris Saint-Germain, his career seemed to be at a crossroads.

With Wahbi Khazri operating behind a strike partnership generally populated by Diego Rolán and Isaac Kiese Thelin and a midfield trio of Chantôme, Gregory Sertic and Jaroslav Plasil, Willy Sagnol seemed to have hit upon a formula that would allow for the club to have the necessary defensive solidity while also allowing the former Bastia man a freer role in attack.

Indeed, Bordaux’s defence was easily the league’s most improved over the run-in, and after several uneven seasons, the club returned to European competition. With important veterans such as Cheick Diabaté and Lamine Sané set to return from long injury lay-offs, and a comprehensively impressive Europa League qualifying campaign, things were looking bright for Les Girondins as the 2015-16 season started.

To say that things have not gone smoothly over the intervening five months would be an understatement; first, Sertic was lost for the season at the season’s start.

Over next few months, Nicolas Pallois, so important in last season’s run-in was sidelined by injury and a ban for pushing an official, and fellow centre backs Sané and Pablo also found their way to the treatment table.

Eliminated from Europe and with the third-worst defence in the league, Bordeaux barely squeaked by amateur side Fréjus Saint-Raphael last weekend, and a trip to Montpellier, struggling but under new management after the resignation of Rolland Courbis, loomed.

The match on Saturday was lively enough, both sides hitting the woodwork as the visitors won 1-0 thanks to an opportunistic finish from Cheick Diabaté. Of more importance, perhaps, than the result, was how the transformation of Saivet may have reached its end game, some eight years on from his professional debut.

Originally used as a second striker, Saivet had, until the current campaign, occupied a variety of attacking roles, both in wide and central areas.

Physically powerful, compact, quick, goof with his feet and an adept header of the ball, as a youngster upon his arrival from Cameroon, Saivet had earned comparisons to Thierry Henry. These plaudits were only part of an inexorable hype machine that saw the player rapidly rise through France’s youth ranks, despite a paucity of playing time at club level.

A brief loan to Angers was only a small respite from the bench at Bordeaux, and even if Gillot had given Saivet more chances, the consensus, particularly after last season’s ignominy, was that he was a player destined for the scrap heap.

However, in the wake of Sertic’s absence, a strange thing happened. After the pain of the opening weekend, a double whammy of losing the team captain and the match at home to a team in Reims that most would have rightly projected as a relegation struggler, a new hierarchy emerged in southwestern France.

Saivet was not only handed the armband, a huge surprise in itself given the experience of the likes of Diabaté, Sané and goalkeeper Cédric Carrasso, but installed alongside Chantôme at the base of midfield, in yet another new role.

The club’s next match, against Saint-Étienne, was hardly a thing of beauty, but Saivet rewarded the faith of Sagnol by delivering a stoppage time equaliser from a free kick to earn the team a much-needed point at the Stade Geoffroy-Guichard.

While poor goalkeeping on the part of Stéphane Ruffier may have had something to do with the nature of the goal itself, Saivet’s all-action performance meant that it would be hard to say it has not been deserved. He had, after all, earlier struck the woodwork from open play. Playing alongside Chantôme, Saivet lead the team that day in tackles, passes completed, blocks and touches.

While his passing accuracy and ball retention could have used some help, it was clear that Saivet had great potential to be the type of energetic midfield destroyer that had made Blaise Matuidi so highly regarded at Paris Saint-Germain.

The tireless French international is among the world’s best box-to-box midfielders, but he also lacks the craft and skill in attack that Saivet holds in reserve from his days in the attacking third.

There have certainly been growing pains for Saivet in his new role over the past few months as Sagnol negotiated a busy fixture list full of cup matches and European action, to say nothing of the club’s injury crisis, but he has continued to improve in terms of his positional discipline and passing intelligence, which is why Saturday finally convinced this writer of his ability.

With Pallois and Pablo still no longer an option in central defence, Chantôme was played alongside Cedric Yambéré, forcing Saivet to operate as the holding midfielder in a 4-3-3. While the heroics of Yambéré and Chantôme may have slightly overshadowed the play of Saivet in Bordeaux’s having kept a clean sheet, his presence in his relatively newfound role was impressive.

Usually played alongside the likes of Chantôme or Plasil, the occasion was not the first time that Saivet had sat so deep in midfield, but it was the first that showed such strong discipline on his part.

Having never had any issue with Saivet’s work ethic, tackling or (for the most part) his passing, any qualms with the player have generally come on the part of his making lung-busting runs to aid the offense and in the process forgetting his role in aiding a slow-footed partner in the form of Chantôme or Plasil.

However, when the occasion called for it, against a Montpellier side that were chomping at the pit to test Bordeaux’s makeshift centre back pairing, having set out their stall with an aggressive 4-2-1-3, Saivet delivered with aplomb.

Rarely going forward as far as the centre circle, and then only to harass Ryad Boudebouz as he tried to instigate the counter, he allowed Bordeaux’s full backs to get forward at will, tracking their runs and making challenges behind them. He also served as a fine conduit for playing the ball out of the back, linking with Plasil and Nicolas Maurice-Belay to allow them to move things forward.

In short, Saivet delivered not only an earnest and athletic performance, as per is his want; he also delivered it within the tactical framework laid out by his manager. Whether the player has truly turned the corner, only time will tell, but for the moment, considerable interest has been expressed in the player by English side Newcastle United.

Mocked under the leadership of Alan Pardew for the raft of Francophone players the club had previously brought in, they have done little this season to improve upon that rather dubious record, if the purchase of Florian Thauvin is anything to go by.

Under new manager Steve McClaren, the club have generally operated in a 4-2-3-1 or 4-4-2, with Vurnon Anita partnering Jack Colback in central midfield. Anita is, like Saivet, a willing worker, but his lack of pace and aerial presence at just 5′ 6″ means that a midfield composed of he and Colback is too easily overwhelmed physically.

Too, with Colback more willing to play the Chantôme role, as it were, and sit a bit deeper, it is easy to Saivet, were he to make this move, be given a little bit longer leash than what he has often had this season under Sagnol.

I do not wish to dwell too much on this point, but suffice it to say that were this move to come to pass, Saivet would represent an upgrade on Anita and neatly slip into his role in the centre of the pitch.

As Bordeaux president Jean-Louis Triaud has been far from evasive about potential departures this summer, considering the club’s financial state, the move would seem to make sense for all involved.

For the moment, though, fans of French football and Ligue 1 should savour what may end up having been a fine conclusion to Henri Saivet’s Bordeaux career.