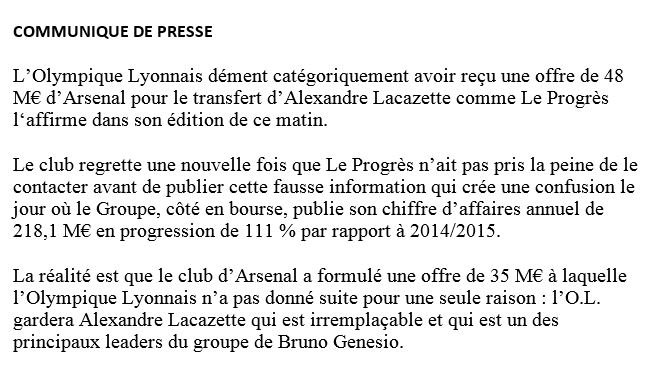 Lyon have announced in a press release that they have rejected a €35m offer from Arsenal for striker Alexandre Lacazette.

The press release in full below:

Olympique Lyonnais categorically denies having received a €48m offer from Arsenal for Alexandre Lacazette like Le Progrès claims in their edition this morning.

The club regrets yet again that Le Progrès did not decide to contact us before publishing this false information that has created confusion on the day where the Group, on the stock exchange, publishes its annual accounts showing €218.1m, a progression of 111% from 2014/15.

The reality is that the club Arsenal made an offer worth €35m, which Lyon did not follow up on for one reason: OL will keep Alexandre Lacazette who is irreplaceable and who is one of the main leaders in Bruno Genesio’s squad.