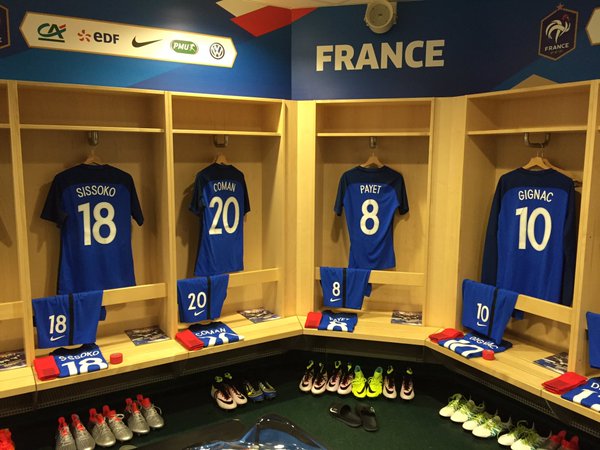 Get French Football News runs the rule on the performances of the French individuals tonight, as they defeated Cameroon 3-2 last night in Nantes.

The Spurs goalkeeper hardly had to make a save for the majority of the game, but did concede two goals.

A disappointing performance at right back from Sagna, who was beaten too often down his flank and offered very little in the way of attacking options.

Rami was a late draft into the squad due to Raphael Varane’s injury, but he did himself no favours with this performance. He was all over the place whenever Cameroon attacked, and ultimately was at fault for the second goal for the vistors. He let the ball bounce when being pressured, and failed to recover which allowed Maxim Chupo-Moting to find space and score.

Not as bad as his fellow central defender, but they really do need to work on their partnership before the start of the Euros. The Arsenal man did have to bail Rami out on more than one occasion, but he was also at fault for the second Cameroon goal.

Evra was a decent threat in attack, providing some good crosses towards Olivier Giroud, but he was caught out for the first Cameroon goal when he was too slow to close down the attack and was eventually being outpaced on the byline. The Juventus man was consistently ruined by the pace of Salli. Of course, Evra can perform much better than this, so let’s take this as almost a blip.

Diarra wasn’t just poor this evening, he was awful. Jittery, unsettling and out of character, we certainly did not see the best of Diarra, who we have gotten accustomed to seeing for Marseille this season. He was ineffective for the entirety of the first half, failing to stop Cameroonian counter attacks and allowing the French midfield to be outplayed in the first 45 before being dragged off at half time for N’Golo Kante.

The scorer of the opening goal, Matuidi had a good game in the middle of the park, and on occasion showed how he can even be used as an attacking threat. His energy will always be a good card to play in the latter stages on games, and he can always chip in with a few goals along the way.

Pogba was again the creative force in the midfield trio as he occasionally pushes forward to almost become an attacking midfielder. The highlight of his game tonight was his inch perfect pass that set up Giroud for the second, a pass that will likely not be rivaled for a long time. Having said that, he lost the ball far too many times by overcooking moves or releasing a pass too late. Will take some time to adjust to his role with Les Bleus. He was subbed off in the second half for Moussa Sissoko, but Pogba should be vital for the coming weeks.

The young winger put in a good showing on his first start for the national side, and provided the assist for the opening goal. His pace was a problem for the Cameroon defence all night, and he was a great attacking threat from kick off. Whilst he may not be an automatic starter for the Euros, this performance will certainly give Didier Deschamps major selection questions.

He may not be the most prolific striker when it comes to the domestic goals tally, but Olivier Giroud is the top scorer for France in the 2015/16 season, and even after his well taken goal tonight, the fans continued to boo him. The supporters in Nantes tonight certainly made their feelings known, and when the striker missed a seemingly easy one-on-one, that didn’t help his cause.

A good performance again from Payet, and he eventually scored the winner courtesy of an outstanding free-kick which is becoming a habit whenever the West Ham man pulls on the France shirt. Unless injury prohibits him from playing, I would like to see Payet start in the opening game against Romania. He adds a touch of class that France simply do not have elsewhere, as his outside of the foot pass for Cabaye in the dying embers of the match showed.

Cabaye nearly had himself on the score sheet in the latter stages of the game, but his brief cameo was uneventful except for his two chances that showed good attacking awareness in terms of positioning.

Replacing Paul Pogba can never be an easy task, but Sissoko didn’t really make that much of an impact in the game. Much like Cabaye, his cameo didn’t show his full capabilities, but he will likely play in the next game.

Kante will be really pushing for a starting place against Romania, and will use every second he gets to show Deschamps what he can do in the defensive midfield position. He replaced Lassana Diarra after half time, and put in a decent performance during the second half and his chances will only improve if he plays in the next game. France looked best in a 4-2-3-1 late on with Matuidi and Kanté in midfield together.

Jocelyn Gourvennec: “I want to take Bordeaux back to the top of the table.”

Olivier Giroud: “I do not understand the booing.”