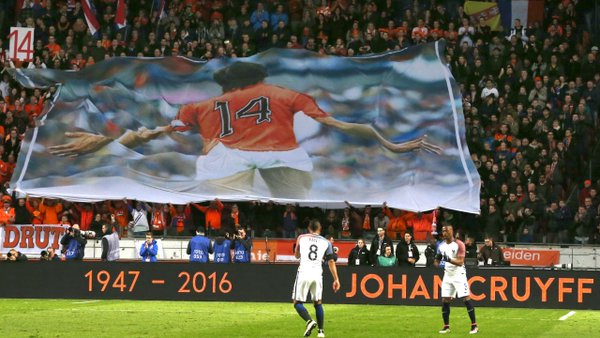 We take a look at the individual French performances on show as Les Bleus beat the Netherlands yesterday during a poignant moment for Dutch football following the death of Johan Cruyff.

An annoying evening for the Marseille captain, who did very little wrong but still managed to concede two goals. In both cases, De Jong’s handball goal and the clever corner kick routine that resulted in an Afellay goal, it is difficult to find fault in the goalkeeper’s positioning. Proved again why he is the established number two behind Lloris.

The Juventus man was his quietly efficient self. With it being one way traffic in the first half, Evra had no defensive worries and combined well with Payet at times on the left-hand flank before being substituted at half-time.

Even if the Netherlands’s first goal should not have counted and should have been ruled out for offside, de Jong was still able to lose his man in the form of Koscielny all too easily. The Arsenal man was for the most part lackadaisical in his distribution and his positioning, prompting Matuidi to come to the rescue several times. Was however impressive aerially.

The Real Madrid brought his incredible aura of calm yet again to the national team setup, impressing considerably in his distribution. Had very few problems defensively, bar a couple of poor decisions to charge forward, leaving space in behind and requiring other players to cover.

Disappointing, dominated by Promes who was the only attacking outlet for the Dutch of any real note. Failed to contribute offensively, mainly due to the inaccuracy of his longer passes.

Crisp and classy, Diarra reaffirmed his claim to a place in the France squad for EURO 2016 last night. Controlled the deep-lying midfield area, allowing France to monopolise ball possession in the first half and showcased his exceptional and luscious passing radar to great effect and with stunning accuracy. Was taken off at half-time.

Was fairly neutral in terms of his input in the first half but became more decisive and dominant in the second half before being subbed off. His pace, power and technical quality proved far too difficult for Clasie to handle. Can be the tournament winner for France and has nailed down his starting spot for EURO 2016.

The captain and the match-winner, Blaise Matuidi’s work-rate and class were unparalleled by any other individual on the pitch over the course of 90 minutes. The definition of the box-to-box midfielder, Matuidi took his goal well and made up for some of his teammates’s defensive mishaps. Excellent.

An exceptionally-well taken free-kick to open the scoring for France and with excellent movement and understanding with Olivier Giroud throughout the first half, the Atletico Madrid man had one of his best performances in a Les Bleus shirt to date. Was substituted at half-time for Anthony Martial.

If Pogba was the midfield bulldozer, then Payet was the attacking lynchpin. The West Ham man approached this encounter with the bullish confidence that he has adopted in the Premier League this season, having more touches of the ball than any other player, more shots than any other player and more passes before a shot than any other player. Dominant, he did not struggle to adapt to the rhythm of his teammates in an offensive aspect. He continued to show excellent close control throughout the game and provides France with a different, more technical shooting threat from outside the area.

The Arsenal man took his goal well, reacting to Blaise Matuidi’s header to fire home from close range. His interplay with Griezmann in the first half was impressive, but his understanding with Martial was poor to non-existent. Struggled with his final and first touches all too often in the second half and still comes across as an individual bereft of confidence – perhaps an all too damning representation of his current club situation.

Highly disappointing as he came on as a second half substitute. Struggled very much to contend with the Dutch advances down the right hand channel, mainly coming from Promes, and failed to provide sufficient support to Anthony Martial when going forward.

Resembled a long lost sheep during almost the entirety of the second half when he was brought on at half-time for Diarra. It was clear that the Leicester man has yet to develop much of an understanding with the likes of Matuidi and Payet, but he tried his best to offer defensive solidity and succeeded in making two particularly crucial interceptions. Did burst forward, if not a little uncontrollably.

Constantly threatening and succeeded in penetrating a fairly flawed dutch 3-5-2 system. Assisted the winning goal for Matuidi, showed more decisiveness with his dribbling and pass selection, even if there is room to make the latter a little bit more accurate a little bit more consistently.