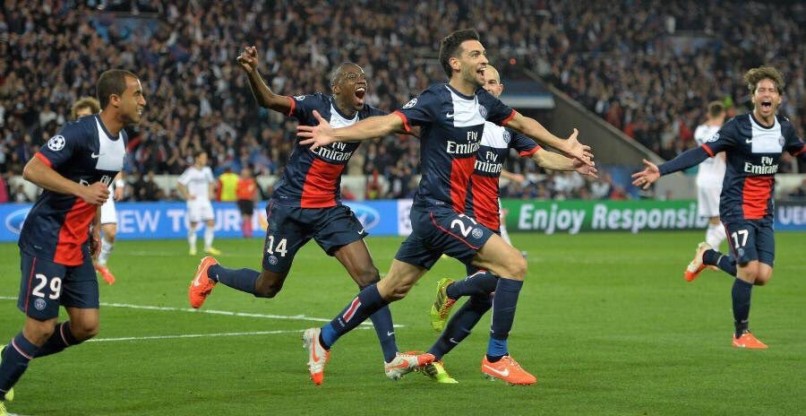 Josh Mart takes the chance to preview the Champions League round of 16 tie first leg between PSG and Chelsea at the Parc des Princes. This matchup is becoming a regular occurrence in the Champions League, with the two sides meeting up in the knockout stages for the 3rd season in a row. The build up to this match has been embroiled in controversy in the PSG camp, as defender Serge Aurier has been suspended by the club for using homophobic language about manager Laurent Blanc and talisman Zlatan Ibrahimovic, as well as disrespecting other teammates such as Gregory Van der Wiel and Salvatore Sirigu on social media phenomenon Periscope.

This is a huge match for PSG and one hopes that Aurier’s stupidity doesn’t distract Les Parisiens in their quest for European glory. Chelsea will be hoping to put their miserable Premier League campaign at the back of their minds and capitalise on the unrest in the PSG camp tonight.
PSG have been simply excellent in Ligue 1 this season. The Paris outfit sit on top of the table, an incredible 24 points clear of second placed Monaco. The 0-0 draw with mid-table Lille at the weekend may seem like a poor result, but Laurent Blanc was able to rest star players in hope of having a fresh legged team to face Chelsea tonight. A win in the home leg will be vital to PSG’s chance of progressing to the quarter finals of the Champions League, and Laurent Blanc will aim to use the Aurier scandal as extra motivation for his players.

Chelsea’s season has been frankly awful. Despite picking up since interim manager Guus Hiddink took charge after the sacking of Jose Mourinho, last year’s Premier League champions still sit in a lowly 12th place in the league table. Saturday’s 5-1 hammering of Newcastle at Stamford Bridge will be a welcome relief to Hiddink after two consecutive draws. The win v Newcastle though did come at some cost, as captain John Terry is ruled out of tonight’s game through injury. Chelsea will be eager to get a positive result in Paris, and a score draw would set them up nicely for the return leg at Stamford Bridge.

Laurent Blanc has a few selection issues ahead of this one. Serge Aurier has effectively ruled himself out of contention, so Blanc has to decide on whether to play Van der Wiel or Marquinhos at right back. The PSG manager also admits that Marco Verratti isn’t fit enough to play 90 minutes, and will have to decide whether to start or bring on the masterful Italian.

With this in mind, I expect PSG to line-up in a 4-3-3 formation with Marquinhos/Van der Wiel at right back, and Kurzawa/Maxwell on the opposite side. The Brazilian duo of Thiago Silva and David Luiz will start at the heart of defence. Despite concerns over his fitness, I expect Verratti to start in midfield with Thiago Motta and Blaise Matuidi, combining to make one of my favourite midfield trios in world football. Ibrahimovic will start at the arrowtip of the attack, and I think that Blanc will opt to play Di Maria and Cavani on the right and left respectively. Ibrahimovic will be keen to exploit Chelsea’s injury woes at the back here.

Chelsea face a mini crisis at the back, with the two regular centre backs Kurt Zouma and John Terry both absent through injury here. Matic is also suspended to Hiddink has a lot to ponder ahead of this encounter.

With this in mind, I expect Chelsea to lineup in a 4-2-3-1 formation, with Azpilicueta at right back, and Baba coming in at left back. Ivanovic is likely to partner Cahill at centre back due to the injuries to Zouma and Cahill. Mikel is set to return to partner Fabregas in the midfield two. Hazard, Willian and Pedro could all start, with Hazard as No. 10, this all depends on Oscar’s fitness. Diego Costa has returned to near his best recently, and will start on his own up front here.

Angel Di Maria (PSG) – Di Maria has had a superb first season in Paris after a difficult time in Manchester. He has great pace and technical ability and has a fantastic understanding with Ibrahimovic. I think he will score or assist tonight.

Diego Costa (Chelsea) – Diego Costa has had a poor season by his standards, but he is looking more and more like his old self as the season progresses. He seems hungrier and more up for it under Hiddink’s tenure, and on his day he can be almost unplayable. Chelsea will be hoping that this is his day.

Last season when the two sides met, they were so hard to choose between as both were having great seasons domestically. This year however, it is difficult to look past PSG as they are the team in great form. With the league being so routine for the Parisians though, this could cause them problems as complacency could set in. Laurent Blanc will know this and will have his players extremely fired up. Chelsea on the other hand, are for once the underdogs here, and this could suit them. I expect a tight encounter, as I think Chelsea will sit deep and hope for PSG to over commit before hitting them on the break. I am just not sure they will be good enough to stop PSG if ‘Les Parisiens’ hit top form.