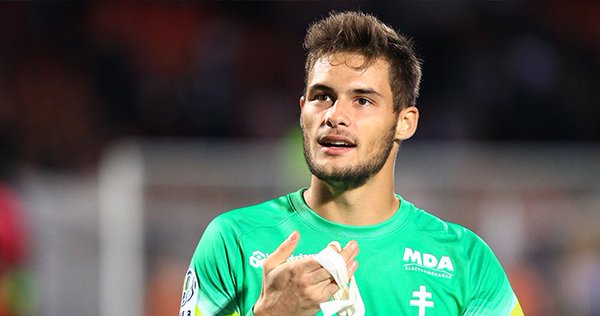 Sometimes success comes to those who wait. In the case of Thomas Didillon, he has had to be a little patient to get a real taste of top flight football but now he has entrenched himself in the FC Metz goal mouth and many of those watching believe he could be set for a big future.

The Seclin native signed his first professional deal with Metz back in 2013, making his first appearance during their title-winning campaign in Ligue 2. He then joined Belgian second-tier side Seraing United for a season before nailing down a starting place at his parent club during the 2015-16 season, helping them bounce straight back to Ligue 1.

He also caught the eye during the 2015 Toulon tournament, staring in three games including the final as France lifted the trophy for the first time since 2007. His Ligue 2 form also led to a call-up to the French under-21 set-up which saw him start four games in Les Espoirs’ failed attempt to qualify for the European Championships in 2017.

In his first Ligue 1 season, the 20-year-old has already amassed two man-of-the-match performances, which have helped his side earn a valuable win over Angers and salvage a point away at Dijon.

In the former, Didillon made seven saves as the away side threw everything to batter down the door at the Stade Saint-Symphorien. Even though Angers were relatively wasteful with their 23 attempts in total, the Metz stopper stood strong as his teammates eventually broke their opponent’s resistance, allowing them to walk away with a 2-0 victory.

In the latter, Dijon forced him to make six saves and he denied Frederic Sammaritano from the spot as Metz held on for a goalless draw against their fellow promoted side.

Cheick Doukoure’s red card just after half time meant that Didillon’s goal would come under real pressure but he stayed composed and resolute, helping push his side over the line.

Afterwards, Didillon wanted to highlight that he felt the team gaining more confidence as a solid unit. He said: “It’s a real satisfaction. It’s mostly how I want to remember. When I talk of collective control, I also want to highlight the defensive aspect. In this area, we are getting better.”

Unfortunately, that defence would be punctured three times by Bordeaux the week after, before a real test of character in the shape of AS Monaco. The principality side drilled Metz for 90 minutes as they pumped seven past Didillon in an awe-inspiring display, the biggest away win for Monaco in Ligue 1 history.

The youngster wasn’t completely blameless either. The first goal comes for miscommunication with his defender that allows the ball across the box for the opener and poor distribution in the second half puts Doukoure in a bit of bother, where he stretches way too far and gets himself sent off.

After that, the defence lost all of its shape and composure, allowing the creative and dangerous attackers of Monaco to run riot. That kind of experience, especially at a young age, can be a real make-or-break moment for a goalkeeper and it could have been a real worry that his early confidence will have been shattered.

Luckily, rumours of Didillon’s demise were a little over-exaggerated. He rebounded well against Marseille, making several saves from point-blank strikes that kept his side in the game until the final whistle.

Many will argue that most of the strikes were simple to deal with and admittedly he should come to claim the cross that Bafetimbi Gomis eventually scores from, despite his best efforts but the marking was equally questionable. In the end, he was netiher flustered nor afraid of being on the big stage again to help his team at least compete.

Didillon has shown a real aptitude for shot-stopping, making almost three saves per game and keeping four clean sheets in nine Ligue 1 games. While it might seem obvious that a goalkeeper needs to keep the ball out of his net, his reflexes and his tendency to be in the right position when a shot comes in allows him to deny the opposition more opportunities than the average man between the sticks.

The Metz goalkeeper also shows a good command of his defence, constantly helping them re-position and keeping them organised. He lost that against Monaco as his defenders pushed too far forward, largely ignoring his instructions.

However, increased discipline followed in the subsequent fixture, where it was visible that Didillon was aiding his defenders in that regard, also displayed his leadership and the respect he has earned with his back line.

He is more of a puncher when it comes to crosses, which comes with mixed results. He averages 56% of making the punches he attempts but if he was simply to come and catch the ball, he has a 100% claim rate this season, then he may help keep the pressure off his defence more often and with less risk.

The Frenchman averages 29.3 passes per game, with 8.9 of those being long balls and has a 42.4% completion rate. That is a little too low, even for a goalkeeper, but he is encouraged in Metz’s style to play a little longer than a lot of modern goalkeepers.

Despite this, he has shown a stable ability with his feet and a good calmness under pressure. He made an excellent little lofted pass in the middle of the park against Marseille, despite being closed down at speed by an on-rushing Clinton N’Jie.

It’s not difficult to see why Didillon is rated so highly both within his club and with the international set-up. He has adapted very well to Ligue 1 football, has put in some great performances and has not shrunk in the face of adversity.

That’s not to say there are not some kinks to be worked out. He needs to be more decisive on claiming crosses and his distribution needs to be more consistent if he wants to make it at the top level, with the latter being ever-increasingly important for a goalkeeper.

Didillon has the tools, he just needs to keep putting in work and maybe a move to a bigger club within Ligue 1 might be the next step. Then, if he keeps on improving in the areas where he is weakest, he will become heavily desired by Europe’s elite.