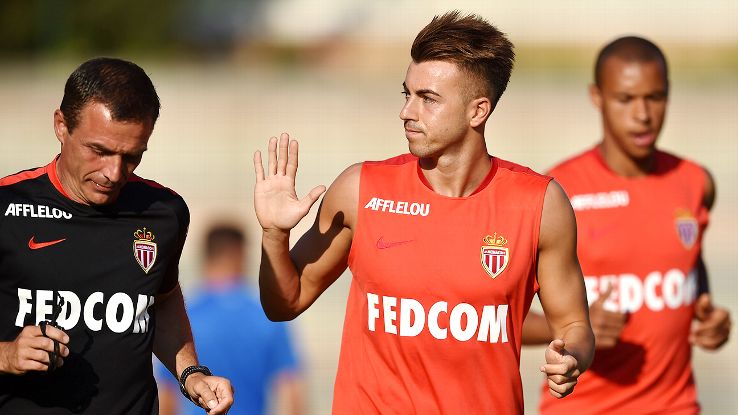 The Vine has been circulating about the Internet for some 24 hours now. The ball flies in from off-screen and is met with a backheel flick, as the player, turning towards goal, fires it in at the near post. His teammates mob him in celebration, the result giving the club a much-needed lead in the wake of their recent turmoil, which has included a managerial change.

Eden Hazard at Chelsea? James Rodriguez? Or maybe Sofiane Boufal at Lille? No, one of the weekend’s most impressive goals was notched by Stephan El Shaarawy, formerly of Milan and lately of Monaco.

The recent announcement that his loan deal from AC Milan would be made permanent, a clause activated by his 25th appearance for the principality club saw him frozen out of the first team by manager Leonardo Jardim. With no league goals in nearly 700 minutes of play and just three in all competitions, it hardly seemed a smart idea for Monaco to spend €14m on a player who, while he had impressed three seasons ago in spurring Milan to a surprising Champions’ League finish had been less than impressive in an injury-riddled successive two seasons.

With Monaco having struggled with injuries, their Champions’ League campaign derailed by an ugly loss to Valencia, the focus has been decidedly off Leonardo Jardim’s charges’ lack of ability to mount a title challenge. Even so, despite losing to Angers at the weekend, and comprehensively at that, they still sit in second, decidedly in pole position to finish in second place.

Instead, Ligue 1’s pundits, yours truly included, have focused more on the season’s surprises, such as promoted Angers, Marseille’s struggles and whether Paris Saint-Germain can win the title before winter turns to spring.

It is understandable, after all; the league lacks a club aside from perhaps the champions that has the international appeal to warrant as much attention as was paid to the league some eight months ago, when two of the Champions’ League quarter-finalists were from Ligue 1.

No, even as there was some residual interest in the club following Anthony Martial’s move to Manchester United, the intervening months have seen scarcely a word written on the team, save owner Dimitry Rybolovlev’s art dealings.

The former Milan man was thus a forgotten individual in a forgotten team, turning in performances that were unequivocally underwhelming, notching just three goals in 24 appearances in all competitions.

He continued to feature up until reaching the number that would trigger his loan being made permanent, but with just about every attacking player save Bernardo Silva and the Italian suffering an absence of one sort or another, one has to wonder whether default hasn’t been a part of his inclusion, the club having played a staggering 36 matches, a figure exceeded only by Bordeaux.

It is obvious, of course, why Jardim persisted with El Shaarawy. Signed by Milan from Genoa in the summer of 2011, the then-eighteen year-old commanded an eye-watering €15.5M fee. While his first season saw the youngster often not even named in the eighteen, he featured increasingly in the back end of the season, and with Zlatan Ibrahimovic and Antonio Cassano exiting in the summer, 2012-13 saw a dynamic start to the season.

With 14 goals in 17 appearances, El Shaarawy took the league by storm, adding a further pair of goals in the Champions’ League Group Stage. While the arrival of Mario Balotelli in the winter window meant that his goal-scoring form dipped precipitously, the season ended with Milan in the Champions’ League places and El Shaarawy traveling with the Azzurri to Brazil for the Confederations Cup. For a player who had not yet reached his 21st birthday, it seemed that the stars were aligning in a major way.

The intervening two seasons, however, were far from kind to both player and club. After scoring a crucial away goal to help Milan get past PSV Eindhoven in the play-off phase, El Shaarawy featured only six times in the league that season, a combination of a hamstring issue, a broken foot and subsequent surgery limiting his effectiveness.

Milan were continued to force to sell their best players to make ends meet, and the club ended the season in eighth, outside of the European places.

Last season, El Shaarawy featured more regularly from the start of the campaign, but suffered a metatarsal injury that saw him miss much of the season’s second half. He did make a return late on, scoring a brace against Torino, but with the club’s general struggles, little was made of the player’s.

The arrivals of the likes of Fernando Torres and Alessio Cerci had done nothing to aid the Rossoneri‘s fortunes, and former striker Pippo Inzaghi was dismissed at season’s end, having failed to improve upon his former teammate Clarence Seedorf’s placement.

This summer, Milan spent heavily, bringing in the likes of Carlos Bacca, Andrea Bertolacci and Alessio Romagnoli. Sinisa Mihajlovic was installed as manager, having led unfancied Sampdoria to a European placement. With such an investment, and Luiz Adriano likewise arriving, El Shaarawy sat on the periphery of Milan’s plans, and was brought into the fold at Monaco without much fanfare.

Obviously, the intervening five months have not met with much success from the player, but the club seems to be coming together at the right time, despite the result against Angers.

With that in mind, why did El Shaarawy fail to come good at the Principality? He has regained his health, the obvious obstacle to his recent struggles, and even featured once again with his national side, somewhat of a surprise given the form of youngsters such as Domenico Berardi and Lorenzo Insigne.

The most obvious difference is in style of play. Not only between the two leagues, but in terms of what had been asked of El Shaarawy by Jardim. While touted by some as a potential replacement for Anthony Martial, given his previous goal-scoring exploits in Milan, El Shaarawy was rarely given a run-out at the top of Jardim’s 4-2-3-1, starting as a striker only twice, against Rennes and Guingamp.

While the club did score four times over the two fixtures, El Shaarawy’s impact in the position was negligible. Starting instead as a left wing, El Shaarawy was most often deployed in the same position, albeit within a tactical framework as he had been with the Rossoneri.

As the club have since the arrival of Jardim, much of the attack comes from the wide players drifting inside, with the occasional contribution from the likes of João Moutinho playing the ball over the top. Yannick Ferreira Carrasco, Bernardo Silva and, this season, Thomas Lemar have thus been the catalysts in attack, moving inside with the ball at their feet and seeking to keeping the ball on the ground.

Even Martial, at his best, would often start his runs moving in from the edges of the area, using his pace and link play to facilitate the attack. Like that trio and the Manchester United man, El Shaarawy is fairly skilled in possession, but lacks the calibre of link-up play or ability to play on the counter that has seen the club at their best.

It is that counter-attacking philosophy and El Shaarawy’s inability to function within it that was at the heart of his struggles in the principality. Even the pint-sized Silva and Lemar are willing to track back and win the ball high up the pitch, using their creativity and the pace of their fellow attackers (Ivan Cavaleiro, Nabil Dirar) to create easy chances.

El Shaarawy, by contrast, ranked above only the immobile centre forwards Lacina Traoré and Guido Carrillo in tackles won, a damning statistic for any player, but one doubly so within Monaco’s style.

Limited by both his abilities and work ethic, the Italian was given an ample chance, but proved unwilling to adapt, even at what is a crucial point in his career as regards his future with the national team.

While his move to Roma looks a promising one, as the creaking defences and possession-based play of Serie A have shown to be better-suited to his game, to see such an obviously talented player unwilling to put time into improving his situation is frustrating.

Monaco’s moves this summer have demonstrated that the eyes of the world’s very best clubs are on the team, and had El Shaarawy succeeded, rather than his move to Roma being a desperate gamble by a struggling club, he could have conceivably gone a long way towards rebuilding his standing in world football. Instead, he returns to Serie A a humbled player, a failed experiment in translation, the rare mis-step by Monaco in their new doctrine of moving on young talent.