Steve Mandanda – A man amongst mice 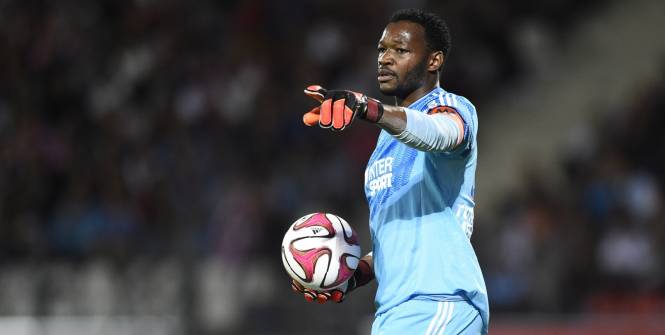 What makes a good clubman?

Unending loyalty to the organisation and its fans? Exemplary performances to push the team forward? Being a guiding light when things go wrong? Remarkable leadership and an acceptance of personal responsibility? Or is it just doing the best job you possibly can on and off the pitch for your team?

Olympique de Marseille goalkeeper Steve Mandanda ticks all of these boxes, and has been the backbone of an otherwise flaky OM organisation both on and off the pitch. The 30-year-old, contrary to popular belief, has only been at the club eight years, but in that time has become one of the most symbolic players in Marseille’s modern era.

The netminder arrived on loan from Le Havre in 2007 for €400,000, and profited from Cédric Carrasso’s knee injury to play over 34 times for Les Phocéens both domestically and in European competitions, and winning Ligue 1 Goalkeeper of the Year before making his move to the Vélodrome permanent for the miniscule sum of €2.5 million in the summer of ’08.

To put that into perspective that is the same amount that Arsenal paid last summer for two 16-year-olds, or what Galatasaray have paid for uncapped Dutch defensive-midfielder and former West Brom disappointment Ryan Donk.

The Zaire-born shot stopper has since won a Ligue 1 title, the Coupe de la Ligue title three times, and has been named Ligue 1 goalkeeper of the year also on three separate occasions. He has been capped over 20 times for the national team, and in 2010 was the natural choice to replace Mamadou Niang as captain of OM, despite only being at the club a few years.

Despite Marseille’s disappointing end to the season Mandanda was again named goalkeeper of the year, and became the club second most capped player after 391 games with the crest on his heart; and at the start of the season he passed the 400 mark, now with 415 games he stands just 40 games behind Roger Scotti as the all-time appearance record holder.

In those appearances Mandanda has seen the good and bad, and despite all of the difficulties the club has had the goalkeeper has remained, despite being linked to the likes of Manchester United, Liverpool, AC Milan and Juventus during his time at the Vélodrome. With his contract now expiring the 30-year-old has been linked to several clubs, most notably Aston Villa, whom were chasing the French international fervently during the current winter transfer window.

Despite club chairman Vincent Labrune announcing that Mandanda would be staying, there continued to be much speculation, particularly given OM’s policy of farming players out as soon as the right money is offered (as evidenced by the appalling transfer dealings this summer).

And after he single-handedly put OM through to the next round of the cup versus SC Caen (pulling off a number of top class saves to keep a clean-sheet before saving three of the four Caen penalties) eyes only grew wider for Villa, who find themselves struggling in the wrong part of the Premier League table with games now running out.

However, that was put to bed by Mandanda himself; never one to shy away from responsibility, the Marseille icon announced on facebook that he would not be leaving.

“Out of respect for the Marseille supporters, I’ve decided to break my silence concerning my future” he announced via his Facebook page “My agent received offers from several clubs to leave this January…I’ve decided to stay at Marseille…One of the main reasons was my attachment to Marseille. I have responsibilities, I am the captain. My adventure with Marseille is not a simple one; it’s a story of how I built a part of my life here.”

For many players an announcement of such gravity would come as a shock, but for a man who has represented Marseille superlatively since his very first game the decision to openly admit his future comes as no great surprise.

It does come as some relief to Labrune however, who has leg of a vast majority of his marquee players in the summer, seeing Marseille slump as low as 19th, and only sticking their head into the upper end of the table in the last few weeks. OM have been appalling at home, and their inability to score has been putting serious pressure on Mandanda and his less than firm defence.

Off-the-field Mandanda has also been a leader, keeping the dressing room together after Marcelo Biesla deserted OM, and successor Michel has been under considerable criticism.

It has been majorly down to the heroics of the 30-year-old that OM have managed to steer themselves away from the relegation places, and still somehow find themselves competing on every front. He has been putting in match-winning performances, and along with the brilliant Lassana Diarra, have been managing to make up for the uncountable amount of passengers Les Phocéens seem to be carrying in every game.

The question is, however, do Marseille deserve to keep him?

While there is no question about the fans’ support and devotion for him and team OM, serious questions continue to linger about the management of Marseille, and whether choices are really being made for the benefit of the club, and its players.

The goalkeeper’s refreshing honesty cannot be said to have spread to those behind the scenes at the Vélodrome, where secrecy and suspicion ostensibly run rife. Shady business dealings with criminals have been exposed in recent years, while the club’s selling policy has meant that Marseille have captured just a single league title in the last 15 years, and far from being the European superpower they were (and arguably should still be), OM have now become a selling club to not only those more powerful on the continent, but in l’hexagon itself.

Mandanda himself has had a disappointing career at international level, and with first-choice goalkeeper Hugo Lloris having already left Ligue 1 to shine on the global stage of the Premier League, the temptation must be hugely strong for Mandanda to follow suit and do the same, ahead of a huge year with France hosting this year’s European Championships.

However, like he always does, Steve Mandanda has once again put the team’s fortunes ahead of his own, and stuck around for what will almost certainly be an extremely difficult second-half of the season. With his contract set to expire this summer, OM fans will be waiting with baited breath to see if they can hold on to their lynchpin for another season, if not Marseille will not only have lost an instrumental player, but a man amongst mice at the Vélodrome.