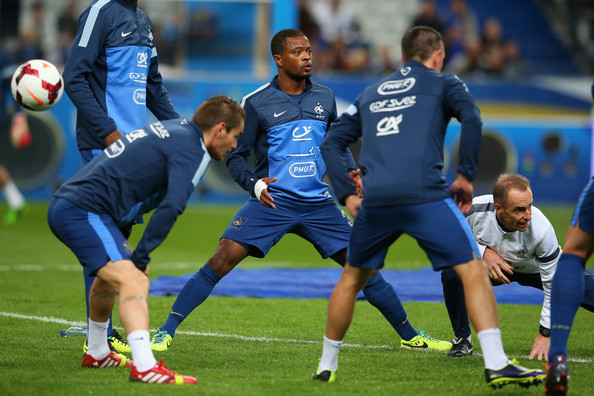 The recent call-ups to the French national team had no partially big omissions apart from one, the ever-present Patrice Evra had missed out. At 35-years-old and with plenty of mileage in those legs, could this be the end of the Juventus full-back’s international career?

The case for that idea pretty much starts and ends with the competition in front of him. Layvin Kurzawa, his heir apparent, has been terrific to start the season and is finally looking like he’s back to the player that shone for Monaco a few seasons ago.

Add the likes of Lucas Digne, who has had a solid start for Barcelona, and Djibril Sidibé, who can play well on either flank, then you have a recipe for young players finally pushing through into the senior ranks. They even have Sevilla left-back Benoit Tremoulinas in reserve should they need it, who is five years younger than Evra, so with him on the decline, why would you even think of including him again?

Back in 2010, Patrice Evra had an argument with then-coach Raymond Domenech and fitness coach Robert Duverne over the expulsion of Nicolas Anelka from the national side which led to a squad revolt. A mauling in the press and public ensued as he was handed a five-match ban and World Cup 1998 winner Lillian Thuram said that he felt Evra should not represent the national side again.

However, what was lost in the furore of ex-players, heads of the FFF and even the French public was Evra’s outstanding commitment to his fellow professionals. Many on that squad felt the need to say something, with all of them creating a joint statement, but only Evra was willing to fight their corner and then put his head in the firing line.

It was in that moment, if he hadn’t already, that Evra gained respect from every one of his peers.

His return did not see him become captain again but he remained a leader on the field. This is proven by his relationship with plenty of the young players in the current France set-up, with Paul Pogba affectionately calling him “Uncle Pat”, as he lent his knowledge and experience to those around him.

In fact, there are not many in the game that possess Evra’s experience. Five Champions League finals with three different teams, league titles and he has played under some of the greatest managers the game has ever seen.

One of those he has worked under is the current national team manager, who brought him to Monaco all those years ago. Didier Deschamps knows better than everyone what he brings to the table, what he can provide both on the pitch and off it, with the latter sometimes being even more crucial in tournament football.

The worry begins to creep in when you see that he has not started the season for Juventus, with Alex Sandro taking his place in the starting line-up for Serie A matches. However, even The Old Lady knows how valuable he can be in the key encounters, with Evra playing each of their Champions League fixtures so far.

Then you look around the current squad and look for those leaders on the field that can push them on to the next level. Their captain, Hugo Lloris, is an obvious candidate but do some of the other experienced players in that squad possess the natural leadership and charisma necessary during tournament time?

Can Laurent Koscielny, who has been passed over for Arsenal captain by his injury-ravaged centre-back partner twice? Can Blaise Matuidi, who is just as unsettled at his own club? Can Dimitri Payet, who should lead by example with his sensational skill with the ball?

At the start of the 2018 World Cup in Russia, should France qualify, Evra would have turned 37 the month prior. It is exactly the right time to be questioning whether he should be part of the setup one last time or if it is actually the right time for him to pass the torch to the next generation.

After a stunning home defeat in the European Championships and with so many important players still so young, they need to ride the old stallion one last time. He might not be able to drag them to glory, he may need the odd rest or might make the occasional mistake but his leadership role within this team is invaluable.

They need every bit of help they can get. Even if he is not good enough anymore to play, bring him along for the ride, maybe even as a coach, because the team will only be bettered by his presence.