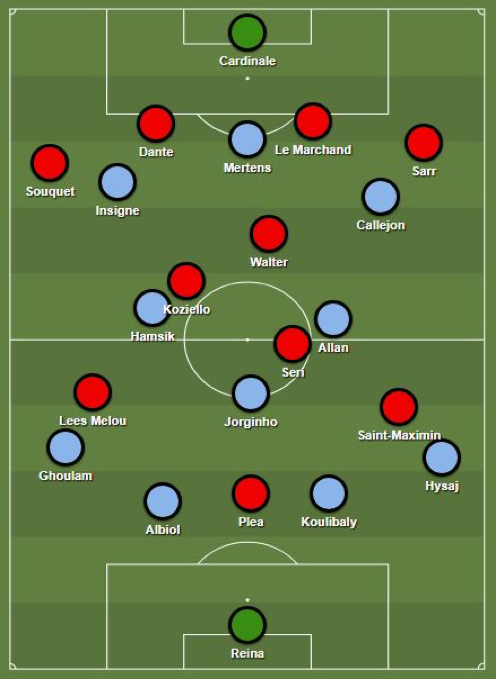 A dream matchup for neutral fans and a duel between two of Europe’s finest coaches, Maurizio Sarri and Lucien Favre. Napoli vs Nice is a match that deserves to be played under the lights of the Champions league proper. Unfortunately, one of these teams will not participate in the Champions League group stage. This leaves me in the enviable position of previewing what will surely be a fascinating match.

Napoli pushed Juventus for the title last season and finished 3rd, just four points behind title winners Juventus and with a league best 94 goals. This attacking potency was mainly fuelled by Dries Mertens who excelled in a new striker role and scored 28 league goals.

This summer Napoli have focused on keeping their squad intact and not losing any of their starting eleven. They have been successful in this goal and every single one of Napoli’s preferred starters last season is still at the club. In addition, they have signed Adam Ounas from Bordeaux and the young winger could prove to be a wild card for Sarri’s men. There is a feeling within Napoli and around Serie A that this could finally be Napoli’s year in which they overtake Juventus and win their first Scudetto since 1990.

It has been a mixed start to the season for Nice. They scraped past Ajax on away goals to qualify for the next round of Champions league qualification, but their league form has been dreadful. Nice have lost both of their league games and it has become apparent that the squad is filled with cracks. Wesley Sneijder and Allan Saint Maximin have arrived, but serious doubts about Nice’s defence have emerged while the future of star midfielder Jean Seri is also uncertain.

Napoli will fancy themselves to win the first leg and after watching Nice’s performances so far this season, I find it hard to disagree with them. However, the Italian side would do well to be vigilant. Nice, despite their poor form, are a talented outfit with a coach who’s tactical expertise is well documented.

Napoli have no major absentees and are expected to lineup with the same shape and personnel that played most of last season. Sarri’s men usually lineup in a 4-3-3 with one holding midfielder and two more attacking players ahead of him. The wingers play quite narrow which gives space for the fullbacks to overlap, especially Ghoulam.

Over the last few years Napoli have gained fame for the way they play out of the back and their fluidity when in possession. Their attack has become a well-oiled machine under Sarri’s guidance and will be an intimidating prospect for a Nice defence that have been shaky this season.

On the other side of the ball, Napoli defend compactly cutting off the central zones and forcing their opposition wide. Napoli have become adept at pressing the ball immediately after they lose it, which strangles any chance of the opposition launching a counter. It will be of vast importance for Nice that they survive the first few moments of pressure and manage to counter effectively.

Nice will be without both Mario Balotelli and Wesley Sneijder for the first leg. However this may prove to be a blessing in disguise, Sneijder is a wonderful player but his defensive ability is not his best attribute, while Alassane Plea is a much better fit for a counterattacking system than Balotelli. Nice have begun the season playing in a 4-2-3-1 system, but have showed serious defensive frailties.

Nice are also missing the services of Bassem Srarfi who was not included in the squad. Against Ajax, Nice struggled to circulate the ball effectively when countering except for a brief period in the second leg.

Lucien Favre will not be relishing the chance of seeing a three vs two in the midfield against Napoli and hinted in his press conference that he will play an extra midfielder. A quick look at Nice’s travelling squad shows Remi Walter as the obvious option to step into the lineup and I expect Favre to revert to a 4-3-3 to combat Napoli.

Despite their underdog status, Nice are a dangerous side in their own right and in Saint Maximin, Plea and Lees Melou have a front three capable of launching devastating counter-attacks. The key will be giving them adequate service which will fall on the shoulders of midfield general Jean Seri. Seri has the ability the run the midfield and Nice’s hopes of qualification rest on his shoulders.

Marek Hamsik (Napoli) – The Slovakian is a brilliant player and is of huge importance to Napoli’s potential success this season. Hamsik usually plays as the most advanced of Napoli’s midfield three and has developed a good tandem with Ghoulam and Insigne when his team is in possession. Hamsik will most likely be matched up against Vincent Koziello who himself is a very good player but tends to struggle defensively. If Hamsik can find space and utilise his passing and technical ability, then Nice will almost certainly fail to contain Napoli’s attack.

Jean Seri (Nice) – Any player who receives the endorsement of a midfield great like Xavi deserves respect and Seri is part of this elite club. The Ivorian is an enormous talent and it’s a small miracle that Nice have managed to hold onto him for this long. Lucien Favre’s entire gameplan will rest on Seri’s ability to hold onto the ball under pressure and give the Nice defense some respite. On the attacking side of play, Seri will be essential in releasing Nice’s wingers and combining with Plea to create opportunities on the counter. If Seri can accomplish this, then it may give Nice the opportunity to leave Naples with a good result.

I think Napoli are too good a side to lose, and I expect their attack to be too much for Nice to contain. However, Nice have enough quality within their team to score a crucial away goal, and I expect them to return to France with a fighting chance.