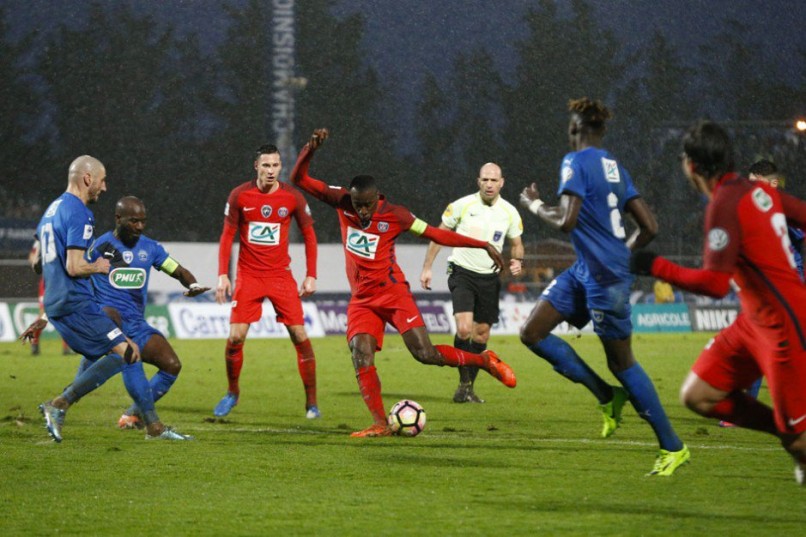 The oft-maligned Coupe de France offered up some scintillating encounters this mid-week, with Marseille’s 4-3 loss to Monaco chief among them. The bigger sides in the competition were not the only ones who enjoyed a bit of high drama, though, as Bergerac thought they had taken Lille to extra time before Eder’s last-gasp winner, while Avranches and Frejus Saint-Raphael both dispatched professional opposition to give the quarter-finals two amateur sides and no teams from Ligue 2.

The heavyweights, Monaco and Paris Saint-Germain, remain the favourites, but do not count out an improving Bordeaux and a Guingamp side with plenty of previous in the competition. With the quarter-finals scheduled for the first week of April, here’s a look back at the key talking points from the Round of 16.

1 | Ménez Fights For His Place

Jérémy Menez started on the left wing for Bordeaux on Tuesday, with in-form François Kamano on the bench. The veteran attacker, signed from Milan in the summer, failed to get on the scoresheet, but, perhaps for the first time this season, he looked like a part of the team. In the season’s early stages, Bordeaux had experimented with a diamond 4-4-2 to be the best out of Ménez and Diego Rolán, but to no avail.

After months of frustration, manager Jocelyn Gourvennec reverted to a 4-3-3 and dropped both of his erstwhile strikers. The new front line, Gaëtan Laborde, Malcom and Kamano, have developed a ferocious understanding, based on intelligent movement and slick passing; Bordeaux are playing attractive football again, for perhaps the first time since winning the league eight years ago.

Coinciding as it did with an impressive rise up the table, Ménez, despite his reputation, became a forgotten man. His seeming lack of patience and selfishness made him a poor fit for this new system, and he was forced to make do with the odd substitute appearance.

However, on Tuesday, with a big match against Lyon on Friday, Ménez got the start on the wing, albeit in a rotated squad. Bordeaux were the better side in the first half, but had gone down 1-0 through Benjamin Jeannot’s opportunistic strike. Ménez responded with a committed performance, working hard to make runs to draw defenders out of position and to set up Malcom and Laborde.

Providing the assist for Laborde’s winner was the coup de grace, but the veteran’s overall performance showed a level of selflessness and intent not previously seen this season. There is, given Ménez’s history of inconsistent performances, every chance that this match was a one-off occasion, but if he can continue to integrate himself into the team in this manner, an already impressive 2017 for Les Girondins could yet have more in store.

It wasn’t Stoke, but it certainly was a rainy midweek night in Niort on Wednesday, and, to what surely would have been Andy Gray’s chagrin, a tricky Argentine made the difference. The pitch was a bog, and the hosts, strugglers in Ligue 2, sat deep to protect their goal.

Gonçalo Guedes was shooting at will, desperate to make an impact in his first start, Jean-Kevin Augustin was profligate and even Julian Draxler, so impressive since arriving, looked off the boil. Cue Javier Pastore, who replaced Grzegorz Krychowiak with less than twenty minutes to play. Within five minutes, he had the ball in the back of the net, running onto a sublime pass from Christopher Nkunku, giving the visitors a goal they desperately needed as Niort pressed their tiring opponents.

His assist for Edinson Cavani’s winner was not necessarily a thing of beauty, especially when compared to the pass that had set up the Uruguyan against Marseille at the weekend, but it was the result that mattered. A loss on the evening would have gone a long way towards evaporating much of the goodwill Unai Emery has amassed in the last three weeks.

Pastore has a long way to go in terms of proving his worth to the first eleven in the biggest matches, between the form of some of his teammates and his own injury history. However, if he can continue to play this wild card role, able to play in midfield or on the wing, giving the champions that attacking spark on the occasions when it is needed, his return could yet be a more valuable asset than one might have thought.

3 | Reality Bites at the Vélodrome

One of the most thrilling matches of the season across all competitions in France, Monaco’s 4-3 win over Marseille on Wednesday was a superb spectacle. Both teams spent the 120 minutes getting forward with abandon, playing on the wings with a swashbuckling style that did much to recall Monaco’s previous midweek encounter, their loss at Manchester City in the Champions’ League.

On the back of the hosts’ humiliating loss to Paris Saint-Germain at the weekend, the result threatened to be a much-needed tonic for a chastened crowd, but instead ended up being a reality check, and a vicious one at that.

Marseille endeavoured to play in a nominally more conservative formation than they had on Sunday, playing what was variously billed as a 5-2-3 or a 5-4-1. However, in practice and in personnel, it often resembled a 3-3-4, with the team’s positioning and defending particularly culpable. With the attack-minded Hiroki Sakai and Henri Bedimo the wingbacks and the nimble Maxime Lopez partnering William Vainqueur in midfield, it was apparent that Rudi Garcia’s mandate was still an attacking one.

The diminutive Lopez was overrun in midfield, his creativity wasted (might André-Frank Zambo Anguissa have been a better option from the start?) and Bedimo and Sakai, for all their exciting forays forward, were rarely found to be tracking back to counter the dangerous Benjamin Mendy and Almamy Touré. The wide attackers, Florian Thauvin and Dimitri Payet, did little to aid the defenders’ cause, and once again, despite occasionally playing some eye-catching football, Marseille’s attacking proclivities were their undoing.

Marseille have the talent in their current squad to finish a creditable fifth or sixth in the league. However, owing to a combination of pressure from fans, the team’s hierarchy and Garcia’s own disposition towards attacking football, the team will continue to suffer these sorts of demoralising losses against France’s better sides if they don’t adapt their approach when necessary.

Yes, Monaco and PSG similarly attack with aplomb, but they also have players in their midfield and defence who are world class or approaching that level. These individuals are willing to get forward when necessary, but also possessed of a holistic awareness of what each individual match requires.

That is not to say that the likes of Doria or Zambo Anguissa couldn’t become players of that ilk, but if they are forced to do the work on their own, their conception of defending as a team will necessarily be damaged, to say nothing of their confidence.

Having now conceded twelve goals in four matches, what Marseille need to do now is knuckle down and play a more conservative style. Facing a trio of winnable matches against Lorient, Angers and Lille before the international break, European football is still a realistic goal, but only if the team can balance itself between attack and defence.

Three Ligue 2 sides took to the pitch in the Round of 16, and all of them lost. Taken on a case-by-case basis, each of them can be somewhat excused for focusing on the league. Auxerre, long a mainstay of the top flight, have slipped badly this season, only recently having escaped the relegation play-off spot by dint of Orléans’ being penalized by financial watchdog DNCG.

Strasbourg have rocketed up the table since late autumn and a second consecutive promotion is a real possibility, sitting level on points with second place Lens. Another match, likely against Ligue 1 opposition, hardly would seem appealing after the Alsace’s club’s very busy 2017. Niort at least put in a good effort against Paris Saint-Germain, but could have little realistic hope of defeating the defending champions.

But what of the division’s more highly-touted clubs, such as Reims, Lens, or Sochaux, teams that have the fan base and squad depth to compete in this tournament? They, and many others in the division, had been eliminated in prior rounds by amateur sides. While there may be some romance surrounding those amateur sides’ wins, the real fault lies with the organizers of the tournament.

By the time that Ligue 1 sides are introduced to the competition in early January, Ligue 2 sides are playing their third match of the competition, with many of them having played an extra match or two through the early stages of the Coupe de la Ligue as well.

With the season starting another week earlier and teams only allowed a five-man bench in the league, France’s second division teams are almost uniformly at a serious disadvantage in terms of scheduling and motivation to take the Coupe seriously. If future editions were designed with these clubs (some of whom draw much bigger crowds than their top-flight competitors) in mind, we would undoubtedly see a more interesting tournament, but at present, who can blame them when their professional status is at stake?

Winners of three straight in the league and finally approaching a fully fit squad, Angers seem as good a side as any to make a real run at this competition. Ismael Traoré and Romain Thomas are not quite what they were last season in defence, but are still a formidable presence.

Thomas Mangani has not forgotten how to deliver a set piece, and the team’s winter arrivals have made a positive difference in attack and defence. So why didn’t Stéphane Moulin opt for a full-strength side against third-tier CA Bastia, knowing that his team have a puncher’s chance of real success in the next stage? Sure, a flight to Corsica made for an onerous trip ahead of a key match at Caen this weekend, but leaving out in-form Karl Toko Ekambi and Jonathan Bamba for the ailing (and clearly affected) Nicolas Pépé and Kévin Berigaud very nearly cost the Loire club.

Granted, CA Bastia are no minnow, having played in Ligue 2 recently and put Nancy out of the competition, but aside from Angers’ goal, the visitors struggled badly against the hosts’ 5-2-3 without the creativity of their two wide players.

Forced to play away from their home ground and unable to use the bigger Furiani owing to SC Bastia’s match the next day, the match was played in Ajaccio at a nearly empty ground, denying the hosts any part of the famed Corsican home advantage.

Moulin was self-effacing in the match’s aftermath, “We know that if we repeat this kind of performance in the next stage, we’ll be eliminated,” but he alone must take the blame for his overly cautious selection. If the manager truly has learned his lesson, let’s hope he responds with a first-choice eleven against Bordeaux in a month’s time.

Fiorentina in talks with Lille to sign Jonathan Ikoné in January