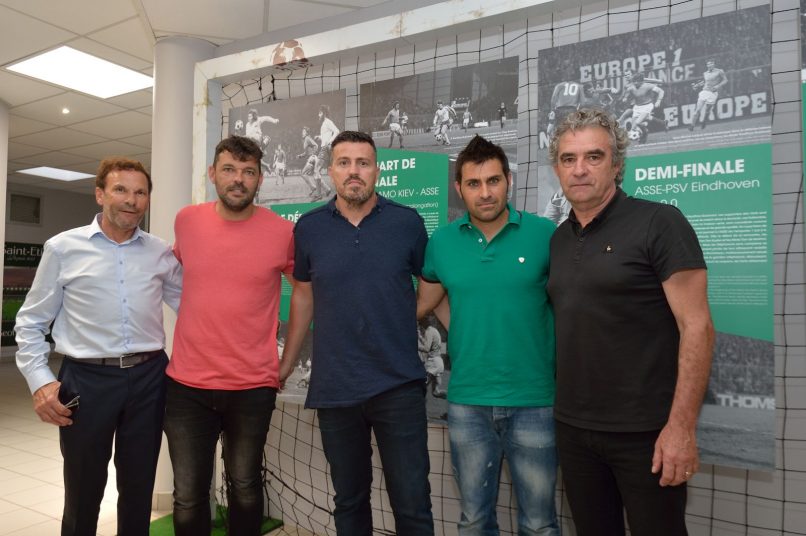 Saint Étienne have enjoyed a successful early run under new manager Oscar Garcia. The “in demand” manager has been turning heads in Ligue 1. Garcia’s quiet, understated overhaul at Saint Étienne has left many interested in how his coaching staff operates.

GFFN caught up with Ruben Martinez, Oscar Garcia’s number 2 and the Assistant Manager at Saint Étienne to receive an insight into the secrets behind Les Verts’ transformation.

In a relatively short period of time, you have made it up the ladder to the role of Assistant Manager. Can you tell us a little bit about your role?

Can you tell us a little bit about working with Oscar and how that relationship started?

Our relationship started in Barcelona in the youth department. When Oscar decided to go to manage in professional football he wanted me to come with him. He gave me an opportunity and of course I thank him very much for it. Now, our relationship is like a marriage (laughs) because we’ve known each other for a long time. He is an excellent coach and is always very professional. It’s important to be able to distinguish when we have to separate the world inside the office and the world outside of the office.

Oscar Garcia and yourself are quite the duo. Oscar is known for his attacking style. Is that a philosophy you both share?

We have been working together for nine years and we more or less have the same ideas. We are similar because if not, it would be difficult to work together. Of course we like to play in attacking style because we come from Barcelona where attacking is the principal idea. We like to keep the ball and have more possession than the opponent – the same idea we are trying to build here.

Saint-Étienne as a club is well-known for its passionate supporters. Is there something special about the club and the fans that you’ve remarked upon since your arrival?

Football is changing with new owners. Saint-Étienne is one of the only clubs with French capital (meaning no foreign investment) and with teams like Paris Saint Germain, it is too difficult to fight against foreign investment.

In the last five years, Saint-Étienne has consistently fought at the top of the Ligue 1 table but has lacked something to break into Champions’ League contention. Is the lack of capital the missing piece or is it something else that Saint-Étienne can change?

We are trying to build a new ideology. It’s football of course, but Saint-Étienne is somewhere around 9th in terms of size of budget in Ligue 1, but I think we can fight for Europa League this year.

In the past, Oscar Garcia has praised your ability to fill multiple roles within his coaching staff. Where does your flexibility come from?

Listening. We are a complete coaching staff including a French Assistant Manager and a french Goalkeeping Coach. We have to listen to each other’s ideas and try to keep the good ideas.

You and Oscar have transformed the playing style of a club with relatively few summer signings made. Is relying on the youth the most important pillar of your strategy this season? Or, is there something going behind the scenes that we are not privileged to see?

We have a medium-sized budget, so of course we look to the young players and at Saint-Étienne we have a good academy. I believe six or seven young players have started to train with us. However, we have completed the squad with experienced players as well. We train the academy players in the second team and maybe one day in the future, our academy players will be important for us.

Did Christophe Galtier and his coaching staff leave the squad in a suitable condition when you came in?

Step by step the players have started to assimilate after we brought in the 3 or 4 players at the end of the transfer window.

But, for the players who were already on the squad, would you say they were in good footballing condition?

I would say yes.

On the topic of young players, is there an individual within the squad that you’ve been particularly impressed with?

Yes, but not only with the young players. We are working individually with each player and I think it is very important to improve all of the players.

Is there anyone in particular that you think has a bright future? Or, any youth player you see being a breakthrough player at Saint Etienne?

Probably, I think there is 2 or 3 players that can play at a good level with big teams.

What has surprised you about the general style of play in Ligue 1?

It is a physical league. You find a lot of teams that play using physicality. You can also find teams like PSG, Marseille, and Monaco that like to keep the ball more or less like our philosophy. You need to be able to change every week to manage the situation. For example, you play PSG and they want to keep possession and the week after you play Montpelier which is a different style of play and have to prepare the players for these situations.

I see, so Ligue 1 is home to diverse styles of play.

Yes, but in general, it is a more physical league. I think there are only 3 or 4 teams can play with our ideas. Playing to keep the ball. Teams like PSG, Marseille, and Monaco.

You have your first Saint-Étienne – Lyon derby coming up next month. This is one of the biggest rivalries in Ligue 1. It is quite the event, what are your expectations?

I hope to win (laughs)! But for sure it will be a great atmosphere. Lyon are ahead of us by only two points at the moment (correct at the time of interview). I think it will be an exciting game with a lot of passion. I hope our players give us 100% to really show who the best side is.

You mentioned one of your targets for Saint-Étienne this season is the Europa League. Are there any other aims this season?

At the moment, the other targets are to build a style and to build a team. This year might be a little bit of a transition year to build our ideas. It is not easy to arrive and try to create a good team, but we will fight to be at the top of the table.

So, first you will work on changing the culture and then work on more realistic expectations?

Yes, that is correct.

Who do you think will win Ligue 1 this season?

For me the clear favourite is PSG. They have the best squad and at the moment they haven’t lost any games. They will win the league for sure.

Personally, what are your ultimate goals for the rest of your career?

At the moment, I am not thinking of the future. As a team, we are here to work. Of course in football it depends on the results, but our goal is to make a good season with Saint-Étienne.

When we asked Ruben Martinez what made him such a versatile coach he responded that listening to the other coaches has. That in itself is testament to the approach that Garcia and Martinez are bringing to Saint-Étienne. Garcia seems to have formed an extremely competent team, putting faith in his coaches as Napoleon did with his generals. Martinez understands that being able to compete against the established hierarchy of Ligue 1 is a process. One that starts with changing the culture of a football club. Martinez was clear about the ambitious goals for Saint-Étienne which the club will only accomplish if every single member of the playing and coaching staff has a collective understanding of. As a basis, Les Verts seem in good hands. Perhaps France’s biggest sleeping giant is finally set to be awoken.