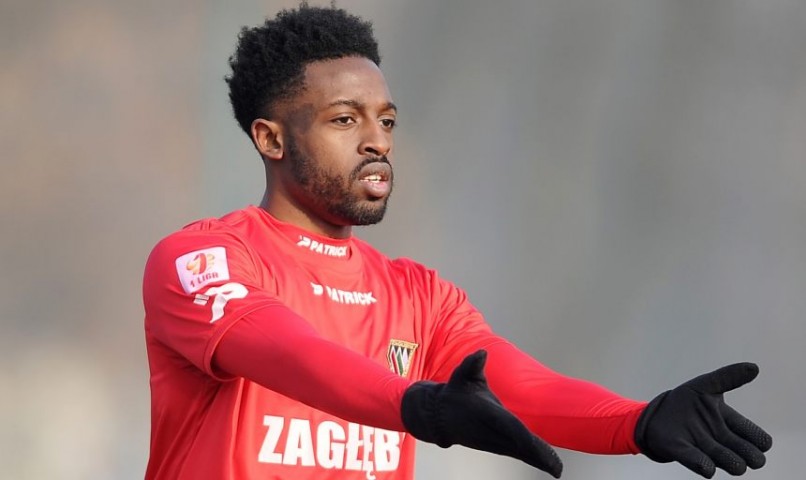 Get French Football News had the pleasure of sitting down with attacker Terence Makengo who discussed his recent, radical decision to move to Poland after a difficult time with Châteauroux.

Why did you decide to go play in Poland?

To start with, I wasn’t very keen on the idea when my agent talked to me about it and showed me the offer. I had a very preconceived idea of Poland. Nevertheless, he told me to go have a look and decide if I wanted to go there or not. They invited me there for a few days, and honestly, I was really surprised by the facilities there.

There are several pitches, the club has a restaurant and there are hotels nearby, so if you haven’t found an apartment yet you can stay in the club’s rooms. You really have everything you need, so I was really won over. I was also won over by the president, the sporting director, and the coach’s words, I felt like they really wanted me here. It was more straightforward now: they offered me all of that, I thought about it with my agent and in the end I decided to come here.

So essentially they provided everything you needed.

Exactly, they’ve provided me with everything, an apartment, a car, and they’re always asking if things are going well. That’s what I needed, a club that trusts in me, one where I know that I can express myself in playing. I don’t regret signing here.

What do you hope to take away from your 18 months in Poland?

For starters I want to rediscover the experience of football, because the last 6 months – the last year, even, at Châteauroux – it very difficult because I was only training, it wasn’t easy. I want a club where I can find myself within a team, score goals, all that sort of thing – I’ve missed it.

Do you think it will be hard to get used to playing regular football again?

In the beginning, it was difficult but I’m coming back now. In the two friendlies, we’ve played I scored two goals and made an assist, so it’s coming back to me slowly. I wouldn’t say I’m at my highest level yet, but that will come. I am quite happy about it, it might be hard at the start, but I don’t have any worries about the future.

Do you think you can reach promotion at the end of the season?

It’s been the club’s goal for a few years now. If it doesn’t happen, we’ll see for next year, but for now I’m here, I hope we’ll go up because it’s very important for the club and the fans. For now, we’re in a good position to go up, the team is very strong, so there’s no reason we shouldn’t be able to.

Do you intend to use your time here as a platform to eventually go back to France, or do you want to stay in Poland?

I haven’t planned it out in my head, like I said I just want to enjoy it. If I have to stay in Poland, there are a lot of clubs, and a lot of big clubs like Legia Warsaw which are really interesting clubs. If I can stay here, I will. After that, if I have to go elsewhere I will. It’s true that I’m not closing the door to France, and there are clubs in France which you don’t turn down, but for now I’m here.

Other than football, what were your first impressions of the country?

In January, it was very very cold, but people here were going about as if it was normal, it didn’t bother them. After that, the people here are very nice, they try to help you, especially since their language isn’t very easy.

I haven’t come across anyone who’s a bit of an idiot or anything like that. Right now, things are going well. The town next to where I am [Katowice] is very big, there’s a lot of shopping centres – Carrefour, Auchan – and honestly, I wasn’t expecting that. So I’m not too disorientated here, other than with the language.

Polish supporters, ultras specifically, are often seen as violent in Europe, what has been your experience with them?

I’ve been told about the ultras, and how sometimes it can get a bit heated, especially on derby days – the third match we’re going to play will be the derby, which will be quite lively. But then I’ve also met some supporters, who wanted to take pictures with me, tell me they were happy to have me, and telling me to give it all on the pitch.

So, for now I haven’t seen the violence there could be yet. I’ve been told there is some, of course, but either way, there hasn’t been anything of that sort regarding me. Things have always gone well with the supporters I’ve met.

How were you shaped by your 3 years at Clairefontaine?

Simply put, it’s where I learnt to play, it’s where I built up my character. It’s a home of football, there’s isn’t anything better in France. I had an exceptional coach who was very close to us, everything was made available for us to develop properly. I only have positive memories, nothing negative to take away from it, those were the good times.

It’s clear that Clairefontaine has a reputation for forming good players, technical and smart players, so it’s a good thing to have on your footballing CV. It helped me develop my technical play, but not just that –  how to play when not on the ball, receiving information, ball control, lots of things. It’s really where you learn the basics of football.

What did you learn from your years at Monaco?

I learnt a lot at Monaco. Things went very quickly for me, I wasn’t necessarily ready for it. I was lucky enough to be surrounded by good people like my friends, my teammates. So, it was really a good period, I take away a lot of positives from it. In the end, things didn’t go so well, but in any case, I see a lot of positivity. Monaco is the club of my heart. Unfortunately, I had to leave, but I learnt a lot there.

Being a former player, what have you made of Monaco’s season so far?

It’s amazing, every time I watch Monaco and I think they’re not going to make it out with a win, they still manage to pull it off. They have incredible players – the little Bernardo Silva who’s having a great season, the midfield duo of Bakayoko and Fabinho, Falcao who’s returning to the Falcao of Porto and Atletico – so there’s not much to it, this year they’ll win the title. PSG can come back, of course, anything is possible, and with their players, we saw what they were capable of against Barcelona.

But if I had to give a prediction, I would say that Monaco will be champion. They have that knack of champions, they’ve beaten all the big teams – Marseille, Paris, Lyon. We thought that they would lose against Guingamp, but no they pulled it out – it’s the small details that show they will be champions.

Can they turn it around against Manchester City next week?

I’m really hoping for it. It’s going to be quite hard, with two goals being needed, and I do think City will score one. Everything depends on the attack, and they have a strong attack as well, so I think it will be difficult, but nothing is impossible.

Can you talk a bit about your time at Châteauroux?

It was a period with highs and lows. It wasn’t easy because the situation was changing every 6 months, it was a bit complicated. Again though, I don’t regret anything. It’s an experience which forged me mentally. I know that after living through that nothing can affect me, but it wasn’t easy, especially at the end.

What helped you get through it?

I’m a very religious person, I withdraw a lot into the Bible and I strongly believe in God. I also think my entourage is what helped me get through this difficult time, as well as my agent, who helped me a lot. That’s what helped me hold on, and keep going respectful to everyone and train as I had to despite the situation. I wish them luck for the future now that we’ve gone our separate ways.

You were preselected for the Congo national team 5 years ago, do you hope to get back to that level?

Yes, it’s a possibility. For now, if it has to happen it will, but frankly it’s not the thing that – as I’ve said – I’m most worried about right now. I’m only concentrating on enjoying these 15 league matches we have left to secure promotion, scoring goals, and helping my team. After that, we’ll see.

This season saw a Polish side (Legia) in the Champions League for the first time in 20 years, is this a sign that the league is improving?

I don’t know the league very well, but at least as a footballer, Legia Warsaw, Lech Poznan and Wisla Krakow are well known. I don’t know if it’s improving, but I do know that Legia played in the Champions League, and they beat Real Madrid [they drew in the end, but came close].

I know that there’s a Frenchman playing there too, Thibault Moulin I think, and I know there’s another playing for Krakow. It shows that things are not necessarily worse playing outside of France.

When, for example, I see the facilities here, I think to myself that they’re better than most Ligue 2 clubs, they’re not bad at all. That’s not to say it’s bad in France, on the contrary, the level there is very good, but there are positives elsewhere too. Right now, I’m happy here. So maybe the league is improving, but I don’t really know it yet.

But you’re hoping to discover it next year?

I hope so, yes. The club here is affiliated with Legia as well, so that helps. We’ll see – it’s up to me to play well and score goals, help my team get promoted, and we’ll see what happens next.