Exclusive | Thierry Ambrose: “Honestly, I wanted to give up on football.” 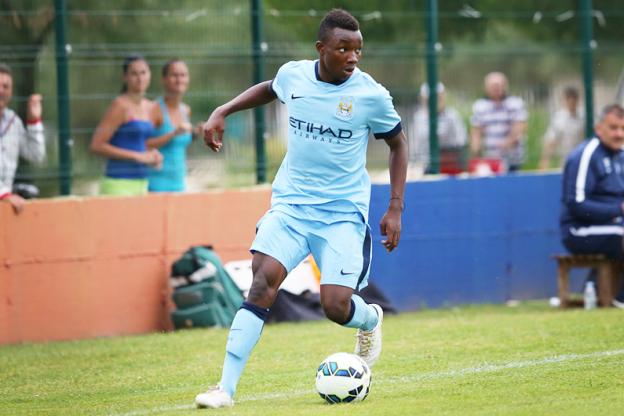 Speaking exclusively to GFFN, Manchester City’s 20-year-old French striker Thierry Ambrose lifted the lid on his current loan spell at NAC Breda, the psychological difficulties associated with a long-term injury and his aspirations for the future.

How has the season been going for you in Holland?

It’s been very good, I’ve adapted well. Even if the first two months were a bit complicated, what with the language and all. On the pitch, since there’s a lot of other Manchester City players on loan there, it’s facilitated the process and I’ve adapted quite well now.

Have you been able to adapt to the league, the style of play?

The coach is similar to the ones I’ve had before, he prefers positional play with pressing, so I haven’t had to change much in that regard which is a good thing. Since there’s a partnership with City, they have more or less the same philosophy and style of play.

Like your parent club two weeks before, you beat Feyenoord in a historic result for NAC Breda. How does it feel to have been part of it?

I didn’t actually know until half time that it would be historic. We went in at 1-0 and the coach told us that if we won we would be making history. He did well to tell us at half time because it changed our mentality, so I think we can thank him for that. It motivated us for the second half.

We’re very young, so the result has put on a lot of pressure and the fans are expecting a lot from us. They think we can go far, but personally I think this just puts pressure on us. But playing with other young players is something great for us, and this is only the start of the season, later on in the year once everyone is settled in it will be even better.

Concretely, what do you hope to take back from Holland at the end of the season?

Personally, I just want to have a good year with the physical side of things, coming back from an injury, and to play the full year. 30 matches minimum, enough for me to say I’ve played a full season. If I play that much, then the goals and assists will come naturally.

What’s surprised you from a cultural standpoint on arriving in Holland?

It’s definitely the bikes. I didn’t know that there was this big culture around bikes here, but it’s incredible. There’s bikes absolutely everywhere, even at one in the morning!

Similar to England, then.

You could say that, yes. But there’s six-seven good teams who play nice football, and the rest, well, it’s more pinging balls up to the target man.

You left Auxerre for Manchester City at quite a young age, was it a hard decision to make, at 15?

It was a hard decision because I was leaving my friends and family. Though things weren’t going so well in terms of my football – I wanted to play with the first team, show what I was capable of, but there were too many changes in the management, we went down in Ligue 2 and there were so many problems in the club. So I decided to leave.

It’s often said that young players leave for overseas too early in their careers. What would you say to this?

I think that leaving so early can really be a springboard. At Auxerre, I was a bit stuck – you have guys from my generation who are still stuck playing in CFA. On the other hand, I’m playing in the Dutch first division against Feyenoord. It made sense for me.

What really bothered me was that there were too many changes in the management, I didn’t really have a sense of direction – I had to be reassured at the time, but that wasn’t the case.

So, you wanted there to be a more clearly defined path.

That’s it, yes. At City, everything is always clear, even when there’s changes in the management the direction stays the same.

What distinguishes City’s academy from the others then?

For me, it’s the fact that from an early age they show you how to play well in possession, pressing as well is very important in England, and this mindset of playing with the ball. From the first training session, they were doing little possession games, and that was good for me.

I really haven’t regretted my choice. It’s shown in the fact that in my first season I ended up as top scorer in the academy. I really appreciate the style of play.

What have you made of City’s start to the season?

I think that they’ll end up champions this season, I hope for it anyway. They can go far in the Champions League with the squad that they have. When you look at them and PSG, they’re the two teams that have looked the most solid.

Personally, I want to do whatever it takes to get into that team, I have a spot there and I’m developing out here on loan. When I see what’s going on there, it really shows that I’ve made the right choice. They play well with the ball and defensively they’re strong. In attack, players like Gabriel Jesus and Sergio Aguero are the sort I want to be playing with. When you play with good players, you’ll always improve.

And what about being coached by Guardiola?

It’s something really special. The first training session I had with him, I was quite stressed because I was trying to impress him, but by the second he’d given me that football DNA. It’s a great pleasure to be coached by him.

His training sessions concentrate heavily on tactics, on possession of the ball. That’s really his style, tactics and possession, and it really comes out in his training.

How do you feel about this tactics-heavy approach?

I don’t mind it, because it’s an area I need to improve in, so it’s perfect for me.

It’s helped you progress as a footballer then.

Later on in your career, how would you feel about returning to Ligue 1?

Of course, I’m attached to France, it’s been a long time since I’ve played there. But for now, I’m concentrating on what this year holds and then we’ll evaluate the options, see if I should stay another year at Breda, or even break into the first team at City if I’ve really had a good year. There might also be good options in France.

Any other championships that interest you?

For now, it would just be France, and Holland – I’m feeling good here at Breda. I’m liking the Dutch championship. Even if I need a bit of time to adapt, I’m getting along well with the team, and I’m happy here.

Regarding your injury a few years ago, what was the road to recovery like?

The last two years have really been difficult for me. I’d get injured, recover and get back on the pitch, get injured again. They were times in the hospital when, honestly, I wanted to give up on football. I wanted to stop, but there was always this football feeling that would come back when I played on the PlayStation, there was this feeling in the back of my mind, that I always wanted to come back to football.

Where do you think you would stand at City had you not been injured?

I was professional, I was on the bench for friendlies so I think I was quite close to the first team, but then of course came the injury. I would say it’s slowed down my progression, but now I’ve come back even better. Even stronger as well, seeing as I’ve spent 2 years solely in the gym. Now I realise how important training sessions are though.

What would you say to a young player who’s gone through the same experience as you?

I would tell them to never give up, to always think of what lies ahead. A lot of people thought that, since I had a cruciate ligament, I wouldn’t reach the same level again, that I’d be slower. But it’s the especially the people that believed in me [that helped]. When you’re injured, you don’t have the same people around you, it’s when you see who will really be there for you.

What do you hope to achieve with Breda this season?

To have the most points possible. A mid-table finish, that would be a good year.

Dani Alves on Alexis Sanchez to PSG: “It is possible.”