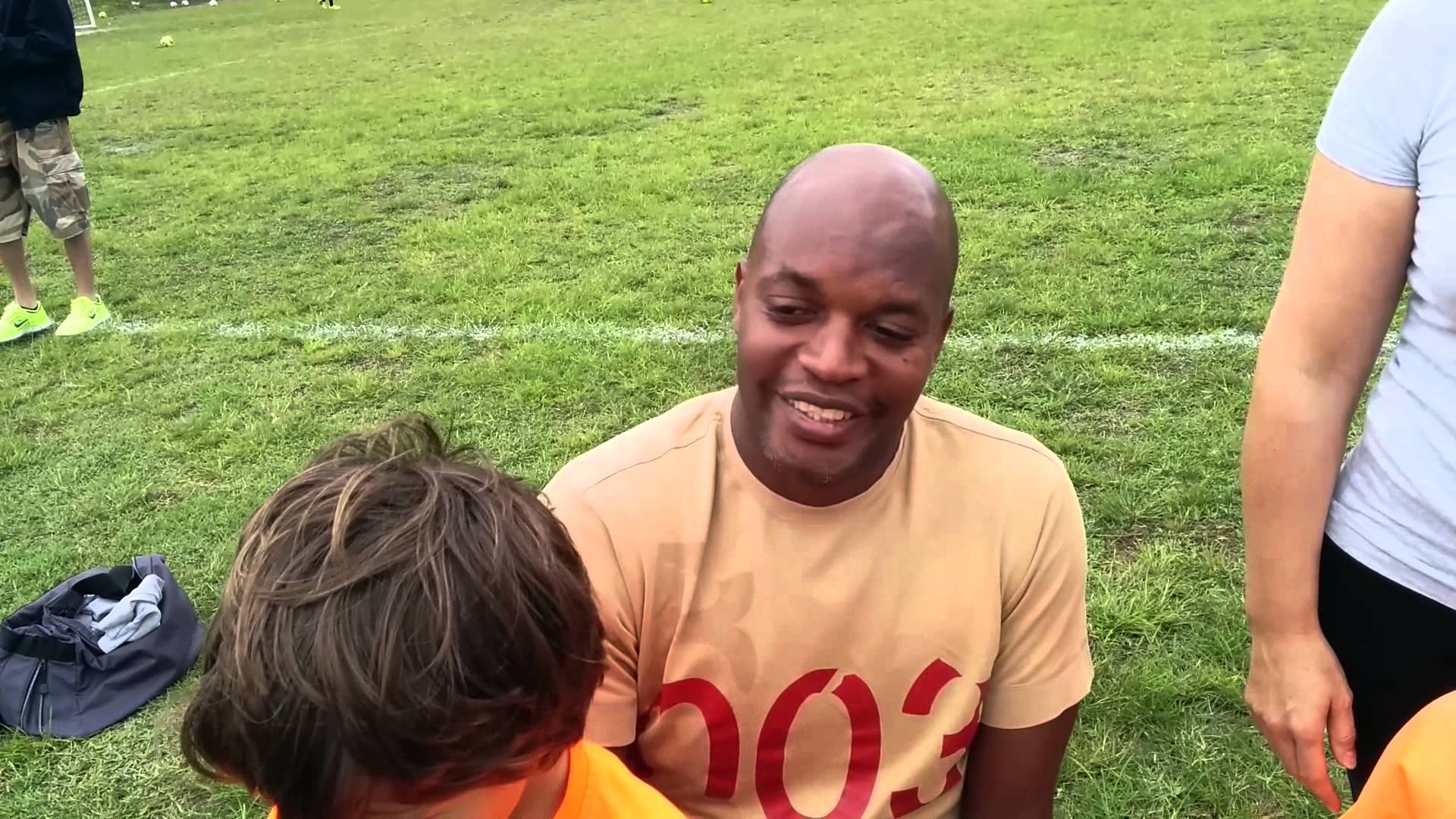 The name Wagneau Eloi congers memories of a golden age amongst Lens fans. The unlikely club of Lens became champions of France and the young Wagneau Eloi who left Haiti at age nine had achieved his dream. The long time Ligue 1 striker’s career has taken him from Haiti to France and back again. Wagneau returned home as the head coach of the Haitian national team to prepare his country for attempted World Cup qualification in 2010. Since then, he has found himself working as the Director of the PSG Youth Academy in Miami, Florida.

Eloi’s story is one of beating the odds, hard-work, and winning. Speaking exclusively to GFFN, we caught up with Eloi for an interview in Miami, the town he now calls home.

As a former Monaco player, how was it to see your former team win the league last season?

I am so happy for them. They have been waiting a very long time for that. They made it a very exciting league and have an amazing coach. He took young players and was able to do something with them. It was very important for the Principality. I think all of my friends who work over there who were also very happy.

Monaco seem to excel in scouting and having an excellent team behind the scenes. From a coaching and development standpoint, do you feel they just do things the “right” way and is that sustainable?

The right way for young players is simple: let them play. When you give them an opportunity to play, as long as they are good, they get more experience, confidence, and they do well. It’s better to have young players. They listen, they want to learn and it’s easy to work with them and then all the young players know what you want.

Do you think it is possible for them to continue to compete with PSG?

No, this year it is impossible (he said jokingly). Neymar is going to make the difference, but in football anything is possible.

Being a long time Lens man I am sure you were aware of the squad they put together last season. They nearly made it back to Ligue 1, but we have seen that as the quality in Ligue 1 improves it also becomes harder to compete in Ligue 2. Do you think Lens will find its way back to the top flight?

For this campaign everything is very difficult. The squad is not good. They lack the players that they need. I am so mad. I am not comfortable with the situation because I know it’s a good club. I know people there. They need to be able think and learn from their mistakes. This is a very important club for France so they need to come back.

Lens really had a good squad last year. What are your thoughts on their style of play now versus the 90’s and early 2000’s?

Before, football was better; better skill and better players. But now, everything is fast paced. When they develop the players now, they are ready to play. Everything is about individual training now. Before, as you said, in the 90’s and 2000’s, you practiced and learned as a team, at the same training session for everybody. Individual training, as a coach, allows you to bring the individual to achieve a specific goal better. For example, a striker will not train the same way as a defender, so the training itself is better. But, a football player before was a smarter player.

I see, before they were better students of the game. Who was the best defender you played against?

A lot (laughing)! I can’t say the best, so I will say I had some very big problems with players like Gallas and Desailly. When you played against those guys it was tough. They played like dogs, a bulldogs.

What is your most striking Ligue 1 memory?

When we became champions with Lens. Champions of the league for us was amazing. Like you said with Monaco, a young team, but at Lens, everyone was together. We knew everyone, we were family. We faced very good opponents, but we did something amazing. It was a good memory because it was such a shock.

It seems PSG are one of the clubs who sees a bright future for football in the U.S. Have you noticed the level of talent increase here? If so, how does that shape the future of the PSG Academy here in Miami and scouting?

First, we need to make the best out of what we have here in America. America needs to develop “soccer” because for me, America does not develop soccer. When America says it develops soccer, it is impossible because if America did, it would not set a limit for some players.

It’s impossible for some parents to pay a lot of money (pay for play system). You can’t tell me you develop soccer. I know everything is about money. For me soccer here is not like in Europe. The main focus is to develop players, everyone plays (in Europe). I can’t say the same thing for here.

Right, it starts in the school playground. What is your vision for PSG in Miami?

Our vision is to produce the football we know and to give opportunities to the kids. For example, if you bring your children here, after 10 years when they have finished with us, they should good players. Players with skill, but that is not enough.

They need to be smart and be able to think and to have values. What we expect from our academy is simple, after 5 or 6 years to have some good players and give them an opportunity to play in Europe and MLS. The best for them is in Europe.

For European clubs who have the means, do you think they should follow PSG’s lead and start academies in the U.S.?

We have had some people ask us about doing something like that. We are happy with PSG and we have another academy (newly opened PSG in West Palm Beach, Florida) but it is complicated. You can bring an academy and develop talent, but the competition here is not enough.

The PSG Youth Cup is a really interesting Idea. For those who are unfamiliar with it, can you tell us a little about it?

In the beginning, it was just one competition between all of the PSG youth academies from around the world. PSG expect us to bring about good players who have potential. They prefer U11- U13 because at this age it is possible to do something with them. It’s not too late, but after that, it becomes complicated. If you do not have the skill and coordination by 14 or 15 it’s more difficult to play football. The main goal is to expose the kids to the best players in world.

PSG were recently in Miami, how was the overall experience for your staff and the kids in terms of interacting with them?

It was important for everyone. Everyone now knows this is a real academy. This is not just throwing on the PSG logo, but we are the real PSG partnership and academy. This year we will send some of our good players to learn and practice in Paris.

Haiti is a jewel of Caribbean football. Haiti has always had a love for football, but has not had any recent success. Do you think it’s youth development holding back the Haitian players?

(With pain in his voice) This is something I am so frustrated with. I know my country has some amazing players. When I was the Haitian head coach, I saw players who played better than me when I was a professional. I know some good players who could easily play Europe, but have no opportunity.

Do you see Haiti making its way back to Copa America and even the World Cup?

So, the love for the game is there, but the country is not giving the opportunity to the players?

The people in charge. If you truly loved football then you would do things the right way. No one can say they love football and not do things right, they would be a liar.

What are your goals for the future?

To see Haiti play in the World Cup. For me it is the only dream I have left for football.

As a coach and director, Eloi has brought a wealth of experience and knowledge to Miami. Combined with the system PSG has in place, these kids have an opportunity they wouldn’t find anywhere else in the U.S. The kids at the PSG Academy outperform the local talent and now, like their adult counterparts, they look for greater challenges. PSG bringing kids from all over the world to play against each other in the PSG Youth Cup not only lets them compete with the best, but opens their eyes to their greater potential and as the slogan goes: Dream Bigger.

Eloi’s only criticism of the younger generation was their lack of football IQ. Eloi is on a mission to bridge that gap. Within the next 5-10 years, I expect to hear that a player from PSG’s Miami Academy has made his way to Paris.

José Mourinho: “I am certain that I will not finish my career at Manchester United.”