FEATURE | Claudio Ranieri’s Nantes: building from the back 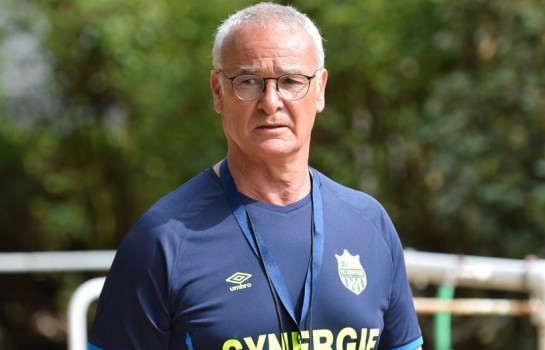 On Saturday evening Claudio Ranieri’s new team FC Nantes recorded their second victory of this early season, a 1-0 victory away at Montpellier in an uninspiring game lit up only by a sumptuous free kick from Diego Carlos. The team’s other victory this season was another away 1-0, this time at newly promoted Troyes a few weeks ago, again a dour affair settled by a late Emiliano Sala winner.

Nantes’s record so far this season reads: 5 matches played, 2 defeats, 2 victories and 1 draw. A mixed early season for Les Canaris, which leaves us with the duel question of what has Ranieri’s impact been so far on this team, and where are the areas that the Italian tactician still needs to work on?

Starting with the positives, it appears that Ranieri is finding most joy in the defensive work and building from the back. Perhaps chastened by shipping 3 goals in his debut match at Lille, perhaps following through with his oft-repeated maxim of ‘if we can’t score, let’s not concede’, the Nantes defence has been the brightest feature of Nantes early season, and leaves his team with 3 clean sheets in a row, including most impressively a lockdown when a dangerous Lyon side came to the Beaujoire before the international break.

Summer signing Nicolas Pallois has slotted in seamlessly at centre back, the hard-as-nails foil to his classy CB partner Diego Carlos. New captain Léo Dubois continues his rise as one of the most promising full backs in Ligue 1: a rarity of a player who takes his offensive and defensive duties with equal levels of seriousness and diligence.

It is somewhat of a surprise that other clubs didn’t show more interest in him in the summer, but no one from Nantes is complaining at this particular blind spot: his excellent form has matched a maturity that comes with the captain’s armband and he is a real asset to Ranieri.

The most eye catching change has come between the sticks. Ciprian Tătărușanu’s arrival from Serie A, where for Fiorentina he had proved himself as one of the Italy’s finest keepers was somewhat of a coup for Ranieri. The Romanian international is an immediate upgrade on Rémy Riou and he has brought an assuredness to the backline, alongside an obvious shot-stopping ability when required.

Going forward, Ranieri’s Nantes have yet to click or to get anywhere near the electric attacking form they showed under previous manager Sérgio Conceição in their remarkable second half to last season.

2 goals in 5 games is a record that will be a cause for concern for the Italian coach, and those 2 goals: a late instinctive finish from Emiliano Sala at Troyes, and a moment of Brazilian free kick magic from Diego Carlos at Montpellier perhaps indicate individual abilities shining through rather than a concerted team effort.

The midfield, following the departure of Guillaume Gillet and absence through injury of Valentin Rongier, has at times lacked fluidity. This has a knock on impact that further forward where the unquestionably talented Sala has had little to feed off, especially following the extended sulk of last season’s sensation, Préjuce Nakoulma.

All of this has conspired to result in a somewhat clunky attacking offering, more akin to the dour football of René Girard this time last season that to the thrill a minute that Conceição served.

Putting Nantes’s 5 results so far into a wider context shows a team that are just about performing on par for a team that is fully expecting to finish in the top half of the league and may just threaten a European spot. Their 2 losses have come against sides that are arguably above them in the Ligue 1 pecking order: Lille and Olympique de Marseille. Their 2 victories have come against teams they should expect to defeat: Troyes and Montpellier.

It is perhaps somewhat ironic that their most promising performance of the early season was actually that 0-0 draw at home to Lyon, a game in which they showed the competitive spirit that Ranieri demands from his sides, with his Leicester City as the ultimate example of this. Indeed, if this form is continued, September looks like it could be a profitable month for Ranieri’s men. Games with Caen, Strasbourg and Metz are all eminently winnable, and may offer the misfiring attack a chance to rediscover the goal.

In his early days at FC Nantes, Claudio Ranieri has focused on building his team from the back, slowly but surely. If, as Ranieri hopes, this defensive stability breeds confidence throughout the team, the attacking verve and goals that everybody knows are somewhere in this team will come. An opportunity-laden month awaits Les Canaris, and if those opportunities can be seized, the Claudio Ranieri story at FC Nantes may get very interesting indeed.