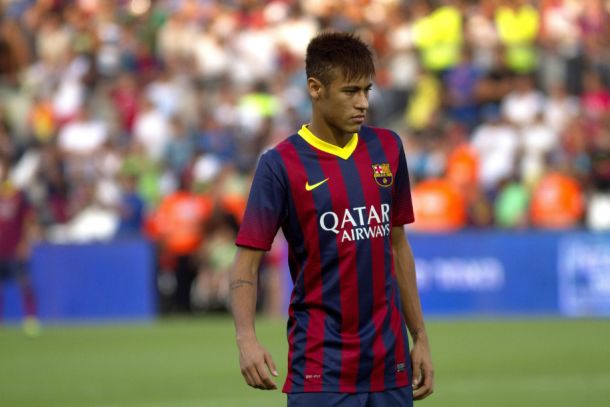 It is rare that a fixture at the Stade de Roudourou captures the world’s imagination. Yet, on Sunday, in this unimposing corner of north-western France, the eyes and ears of football fans from across the globe will be transfixed on Guingamp’s home turf, awaiting the first glimpse of a Brazilian forward, on whom a Parisian club have spent more money than six countries have GDP.

The game is one of the most hotly anticipated fixtures in Ligue 1 history, all because of one player and one transfer saga. Seeing Neymar in the blue of Paris Saint-Germain will make what was thought to be impossible, a reality. But there is a little history that adds more weight to this Sunday’s story than would first meet the eye. Guingamp coach Antoine Kombouaré, for one, was the manager jilted by PSG’s new Qatari owners in 2011, a victim of their pursuit of a coach with a ‘bigger name’.

Neymar’s debut presents the intriguing prospect of Kombouaré standing in opposition to his former employers as they try to showcase their latest, multi-million-euro, ‘big name’. Moreover, there is also the small matter of the last time a world-famous Brazilian in the colours of PSG strutted his stuff on the Guingampais surface back in 2003. That day, a certain Ronaldinho netted one of the most stunning individual goals in French football history. No pressure, then.

This weekend’s game has been set up to be all about Neymar. Guingamp themselves have been overlooked as an opposition. Indeed, their only mention has been to highlight the fact that the new multi-millionaire Prince of Paris will be travelling to a rural, allegedly ‘back-of-beyond’ club whose nickname is ‘The Farmers’.

This, for some, has served to reinforce the preconception that Neymar is moving only for the money, to take a lucrative contract and sacrifice playing at a ‘higher’ level. It is a far cry from the glamour of La Liga, it has been said, and thus his debut at Le Roudourou shows the transfer for what it really is; a financial investment in every sense. Ligue 1, they say, is a step-down.

There can be no denying that this weekend’s clash fits the overused metaphor of David versus Goliath. To sum it up succinctly, Neymar’s expected wage at PSG is thought to be around £537,000 per week, according to the Press Association. En Avant de Guingamp’s average annual player wage, in 2016, according to the Global Sports Salaries Survey, was £293,650, which is equal to £5,647 per week.

In terms of financial disparity, we could go on. Guingamp’s wage budget is about 13 times smaller than that of PSG. It is a similar story for another half dozen Ligue 1 sides. But beyond finances, the fixture still screams of the Great versus the Insignificant. EAG’s home, Le Stade de Roudourou, has a capacity of 18,250. The population of Guingamp itself is only 7,000.

Guingamp are small outfit. They have spent a good part of their history in the third tier and amateur football, only achieving promotion to Ligue 1 in 1995, 11 years after turning professional for the first time. They do however have trophies in the cabinet; two Coupe de Frances, both won against rivals Rennes, in 2009 and 2014. Some famous alumni may also be familiar to the English audience; Didier Drogba, Florent Malouda and Laurent Koscielny have all donned the red and black of EAG in recent years. Yet, in all regards, it seems, Guingamp pale in comparison to PSG.

But, despite the assumptions and the realities of their club sizes, there is one regard in which the two do not differ so widely. That is on the pitch itself. To assume that Guingamp will simply roll over on Sunday is a wildly uninformed assumption. There will be no welcoming party for Neymar, nor will there be a procession for the capital club.

Le Stade de Roudourou is certainly not a happy hunting ground for visiting sides. Paris Saint-Germain are no exception; they have only won once here in their last five visits in all competitions. Last season, Guingamp lost just four times at home, achieving the fifth best home record in the division.

It was their away form that proved their Achilles Heel last term, hindering their early season assault on the league’s European spots, falling away to finish 10th. That said, it was still the third highest league finish in the club’s history. Coach Antoine Kombouaré won a lot of plaudits for the way his side played, with fast counter-attacking football, which stunningly undid PSG in a famous victory last December.

And it appears that more of the same is in the offing this time round. A 3-1 win against Metz on the opening day of the new campaign put to bed the away-form hoodoo that had been lingering over the club since their last victory on the road, which came at Lyon, back in October of last year. Their counter-attacking flair was very much on show too, typified by their second goal and what would be later awarded goal of the weekend, scored by academy product Ludovic Blas. He finished off a sweeping move that saw the Farmers move the ball from the edge of their own penalty area to the back of the Metz net in under 15 seconds.

Guingamp have had a good transfer window so far, retaining their most important assets. Jimmy Briand, their standout name and club captain, extended his contract by two years earlier this summer, whilst coveted forward Yannis Salibur, remains, for now, an EAG player.

Above all, despite interest from Saint-Étienne following the departure of Christophe Galtier, the continued appearance of Antoine Kombouaré in the Guingampais dugout is perhaps the club’s biggest success this summer, especially considering that for many, a few losses in personnel, including the manager, could well have seen the club tumble down the table. Instead, there have been a number of positive new additions, including Lebogang Phiri, Marcus Thuram and Razza Camara, who have all slotted seamlessly into place at Le Roudourou.

Neymar’s arrival, as Adam White has written for Get French Football News, is fantastic for Ligue 1. It will raise the profile of the French game and bring it entirely new audiences. For En Avant de Guingamp, as the first hosts of PSG’s superstar investment, this is not only a great opportunity to introduce themselves to the world, but to also help dispel many of the preconceptions surrounding the smaller, less well-known sides in the division.

Despite all that may be assumed about the Farmers from Brittany, and despite the main draw for the occasion being one player wearing number 10 for PSG, rest-assured, there will be no red carpet for Neymar on Sunday night.

Barcelona scouts were in Nice last night for Jean-Michaël Seri