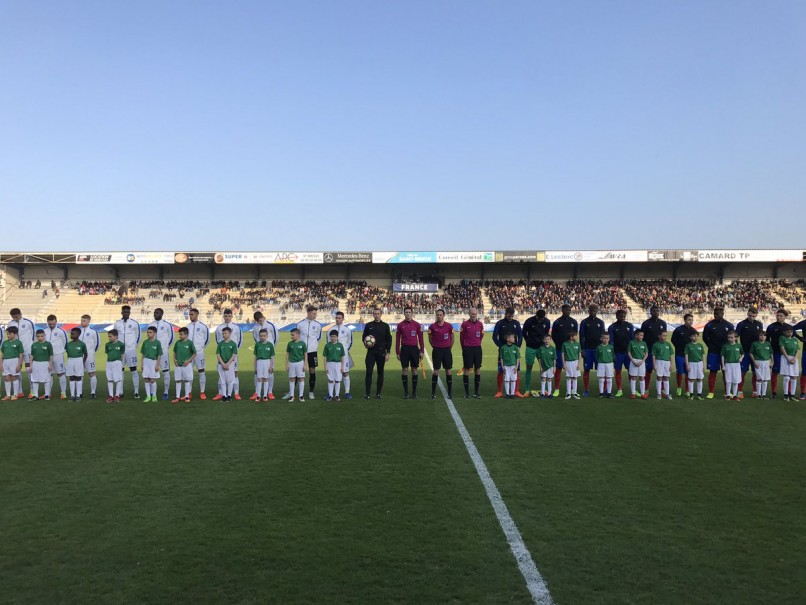 Les Bleus weren’t the only French national side in action over the last week; while the current crop of U-19s failed to follow in their footsteps, failing to win a trio a trio of matches against Israel, Bosnia and Bulgaria, last summer’s European Champions turned in a decent set of performances in a friendly tournament.

Contested against Portugal, Senegal and England, each of whom have also qualified for the upcoming U-20 World Cup, the Tournoi 4 Nations provided a good opportunity to assess the progress of the group of youngsters who had so thoroughly impressed last summer.

On this occasion, Ludovic Batelli was forced to select a somewhat weaker squad than the group that had triumphed in Germany, with Kylian Mbappé called up to the senior side and Issa Diop and Clément Michelin both injured. Nevertheless, this group of players, of which Ousmane Dembélé is also a part by age, is looked at with great interest; here are a few of the more successful (and disappointing) players from the three matches.

Surprisingly not included in last year’s European Championships squad by Batelli, the central midfielder has been hugely impressive for the champions this season, playing more than 800 minutes across all competitions. With his wiry strength and neat passing, as well as an underrecognized eye for goal, Nkunku is a superb box-to-box midfielder and lost no time in showing Batelli he is fully deserving of his place in the squad. Style-wise, he offers the perfect complement to the more attack-minded Amine Harit and the somewhat prosaic Lucas Tousart, an assured yet subtle presence who can control a match without dominating it.

After splitting time with Mbappé in qualification for last summer’s tournament, Thuram found himself on the bench in Germany. He did appear in every match, but never from the off, as the combination play of the Monaco man and Jean-Kevin Augustin resulted in the pair scoring a combined eleven goals. With Mbappé now with the senior squad, Thuram regained his place on the left, and responded well with two goals, against Senegal and England.

He has found playing time hard to come by with his club, and featured most recently for Sochaux’s reserves, but that is down more to the good form of Faneva Andriatsima than anything Thuram is doing wrong. Playing for the reserves also affords Thuram more time as a centre forward, as Les Lionceaux generally play with Andriatsima as a lone striker, but on the basis of these matches (Thuram started and scored against Portugal and Senegal), his progression is hardly being hindered.

A cynic might say that Mukiele was only included because Faitout Maouassa was with the current crop of U-19s, but that would neglect the fact that the Nancy player was named to the team of the tournament last summer. Mukiele, who joined Montpellier in Janauary, has looked every bit the Ligue 1 standard since arriving from Stade Lavallois, starting most matches as the team’s form improved. A somewhat peripheral figure while playing in Ligue 2, Mukiele started just once in this set of matches, at left back, but with his versatility (normally a right back for La Paillade, he is also capable of playing centrally) and powerful style, he will no doubt be a useful asset to Batelli in seven weeks’ time.

Even with a raft of departures (Yacouba Sylla) and injuries (Clement Chantome) Poha has been unable to find any significant playing time under Christian Gourcuff. His talents are admittedly better used in France’s 4-3-3 than his club side’s 4-4-1-1, but in recent months, he has been unable to even find a place on the bench, with Nicolas Janvier supplanting him in that role. Janvier is more of an attack-minded player, so that certainly figures in Gourcuff’s thinking, but Poha will have to be frustrated with his limited opportunities.

Frustration was certainly an apt descriptor for Poha’s actions in the tournament’s opening match, as his growing annoyance with Senegal’s sharp tackling culminated in a deserved red card. Prior to that, he had recorded assists for goals by Marcus Thuram and Yoan Severin at corners, but with Lucas Tousart in good form with Lyon, Poha no longer looks a part of Batelli’s first choice eleven, a disappointing development after starting every match in Germany last summer.

Named to the team of the tournament last summer, despite being a year younger than most of his teammates, Maouassa was perhaps the biggest surprise in Germany. In displacing Olivier Boscagli at left back, the slight player added more craft and quality on the ball, and looked forward to playing a more important role with his club, as well as the chance to test himself against a better level of competition after Nancy won Ligue 2. Instead, though, he has been used sparingly, with Vincent Muratori or Tobias Badila preferred, and when given opportunities, it has often been further forward, even on the left side of attack in a 4-3-3.

Given Nancy’s pressing relegation concerns, and Badila’s generally impressive season, there should be no surprise that Pablo Correa has been loath to give Maouassa a chance, but he has frustratingly been kept on the bench, rather than being deployed with the reserves. A foot injury cruelly kept out of this set of matches, but playing with his fellow 1998 players looks more likely than a trip to Korea at this juncture.

Paul Bernardoni has been poor indeed for Bordeaux this season, unable to surpass Jerome Prior in Jocelyn Gourvennec’s side. Despite leading France to triumph last summer, the former Troyes man’s poor spell from last February remains the image most followers of French football have of him. He looked dull again in conceding two goals against Portugal, leaving Alban Lafont wondering what he has to do to displace his rival.

Good form for a team battling for European football seems not to be enough; perhaps Batelli is taking a page from Didier Deschamps with his bizarre loyalties. Given these were the final matches before May’s World Cup, it seems unlikely Lafont will have another chance to change the manager’s mind, even as he remains eligible for the next two tournaments, having been born in 1999. Lafont’s chance will surely come, it merely remains a matter of frustration to see the mediocre Bernardoni continue to be first-choice.