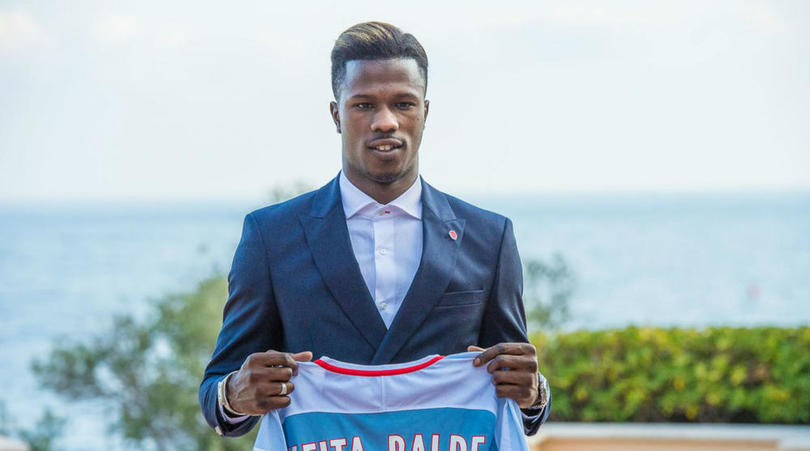 In a recent interview with L’Équipe, Monaco forward Keita Baldé Diao was pressed on the comparisons between he and Kylian Mbappé. The Senegalese, purchased for what then seemed an eye-watering €30m this summer, balked at the comparison, saying, “I was expecting it; we’re both young players. But I’ve come to write my story, to play my game, I don’t want to be compared with anyone. My goal is to play as many matches as possible, to score and provide.” On the basis of his recent performances, though, the former Lazio man may find those comparisons, lazy though they may be, harder to avoid, particularly if Monaco can sustain a challenge for Ligue 1 into the new year.

A well-taken goal to give Monaco the lead at Bordeaux on Saturday was his second in as many starts in Ligue 1, both Monaco wins after a loss to Lyon and a draw against Montpellier. In the two matches prior to those, Keita, who prefers to go solely by his given name, had recorded assists as well, against Besiktas and Lyon. Born in Spain to Senegalese parents, Keita had come up through Barcelona’s youth academy and was a highly-regarded prospect at La Masia. After playing a seemingly innocuous prank on a teammate, though, he was shipped out to fourth-division side Cornella, where he scored with aplomb. Lazio snapped up his rights in 2011, and he blossomed into a star in Rome, netting sixteen times last season, despite playing less than 2000 minutes through a combination of his national team duties and rarely playing the full ninety minutes.

That mark actually betters the amount of league goals scored by Mbappé at Monaco last season, and as Keita’s comfort with Monaco and the French language increases, he could very well set a new personal best this season, following in the footsteps of his fellow winger-come-striker. In Barcelona’s youth ranks, Keita was steeped in the Blaugrana‘s classic 4-3-3, a tactical approach also used by his country. Played on the left, rather than as an orthodox striker, he admits it is the system in which he feels most comfortable, as it gives him the freedom to cut inside while also relieving him of much in the way of defensive work.

He has already shown, however, like Mbappé, that he can prosper in a number of positions, driven by a fine shot, good pace, and an underrated physicality. Already for Monaco he has played on both flanks and on his own up top, allowing Leonardo Jardim to manage the fitness of Radamel Falcao and Thomas Lemar through rotation and tactical shifts, including playing the 4-2-3-1 that defeated both Caen and Bordeaux 2-0 in successive weeks.

Keita also enjoyed success playing alongside Ciro Immobile at Lazio, suggesting that when the Colombian is fit, Keita’s combination of pace, scoring threat and ability to pull defenders out of position can make him a perfect complement to Ligue 1’s leading scorer should Jardim opt for the 4-4-2 that was preferred last season. Adama Diakhaby had partnered Falcao at times earlier in the season in that very formation, but the former Rennes man, while rapid and a hard worker, simply doesn’t offer enough of a goal threat to be as effective as Keita if played in that role.

Obviously, it is too early to make a definitive statement on what Keita’s role will be within Monaco, but he now appears to be firmly a part of Jardim’s first-choice eleven, no matter the setup, with Lemar able to play as a number ten if Keita plays on the left. There are necessarily concerns about his defensive work ethic, a potentially serious issue given how Porto’s Moussa Marega dominated the attack-minded Jorge when the two clubs met a month ago in the Champions’ League, but one would have said the same about Lemar upon the Frenchman’s arrival from Caen.

Jardim has done sterling work in improving Lemar’s all-around play, and there is no reason that his hard-nosed approach cannot foster the same sort of refinement in Keita’s approach to the game. After all, it is not only Lemar who has improved under the Portuguese manager; similar progression from the likes of Yannick Ferreira Carrasco, Benjamin Mendy, Bernardo Silva and Tiemoué Bakayoko have all seen them make moves away after dramatic improvements in their play at Monaco.

Keita’s touch can be erratic as well, but he has shown a willingness, again like Mbappé, to be constantly on the move, even when played as a lone striker. On Saturday, despite getting only a handful of touches (a team-low 25, to be precise), he was a consistent menace to the slow-footed Bordeaux back line of Jérémy Toulalan and Igor Lewczuk. Only one of his three shots found the target, but his touch and finish from João Moutinho’s cushioned header was top-drawer, and strong evidence for the general efficiency of his play. Keita may not be Mbappé, but he is already displaying the same predatory, instinctive style of play that made the teenager such a sensation across Europe last season.

Speaking again to L’Équipe, Keita remarked, “If you think too much, if you worry, you won’t reach your goals. I’m a player of instinct; if my body tells me to move right, I move right without thinking.” That instinct can sometimes be wrong or rash, as is the case with many young players, but brimming with the type of determination and confidence necessary to succeed at football’s top table, Keita appears poised to be a key part in reversing what had seemed a poor start to Monaco’s season.

1 | In 2010, Wesley Sneijder was one of the world’s best. 5 goals at the 2010 World Cup saw the Dutchman only beaten to the Ballon d’Or by Messi, Iniesta and Xavi. Since, the downward trajectory of the now 33-year old’s career has been steep. A decline mirrored by then club Inter Milan following their treble win with Sneijder eventually exiling himself with Galatasaray in 2013. Although a fan favourite in Turkey, his form never truly recovered. Nevertheless, as he arrived at the Allianz Riviera this summer, expectations remained high but his presence has posed more questions, tactically, for Lucien Favre then it has answered. Nice’s best display came in the 4-0 drubbing on Monaco when Favre deployed a 4-4-2, playing to his key players strengths.

Mario Balotelli is at his most effective when partnered by Alassane Pléa in attack while the pace of Allan Saint Maximin is utilised on the flanks. Sneijder does not fit into this setup; lacking in the pace to play on the opposite flank and no longer boasting the mobility to join Jean Seri in a two-man midfield. With Pléa benched and Barcelona loanee Marlon added to a 5 man defence, Sneijder was ineffective in his more natural attacking midfield role as PSG swatted away a weak Nice in a 3-0 Friday night win in Paris. Nice have now lost 7 of their 11 Ligue 1 games to date, underlining the fact that finding the right fit, for what is still a marquee signing for a club like Nice, could be the key to saving Les Aiglons already fading European hopes.

2 | Since 2008, Strasbourg have gone through liquidation, re-formed in the amateur 5th division and been promoted or relegated 6 times but one aspect of the club that’s remained constant throughout the uncertainty is their raucous support. Ligue 1 winners in 1979 and League Cup winners as recently as 2005, Strasbourg is a true footballing city and even as a third division club their average attendance surpassed a handful of top tier sides. A series of impressive home displays since their return to Ligue 1 at the start of the campaign has shown that their loyal, vociferous fan base could be key in dragging a side lacking in Ligue 1 quality to Ligue 1 safety.

A battling 2-2 draw with Angers, a game Strasbourg dominated for long stretches, followed another committed display in the cup win over St Étienne this week at Stade de la Meinau. A disappointing loss to Amiens, admittedly with 10 men aside, they’ve been impressive in beating Lille 3-0 and unlucky not to beat Marseille in a thrilling 3-3 draw. The intense, boisterous atmosphere created by Strasbourg fans is proving to be an asset to the league as home games become an under the radar gem in the Ligue 1 crown as Strasbourg supporters attempt to roar their team to safety.

3 | Despite the major overhaul of Lille’s squad in the 10 months since Gerard Lopez’s purchase of the Northern club, their true marquee signing has been managerial. Marcelo Bielsa’s combination of notoriously gung-ho footballing philosophy and eccentric persona is an attractive proposition for many, especially after the indelible mark he left on Marseille during his year in charge and for LOSC to persuade him to return to Ligue 1 felt like a genuine coup. However, Bielsa’s short reign now verges on disaster after another loss on Sunday night to his former club as Les Dogues sit second bottom with just 6 points after 10 games, already 4 points off safety and scoring just 3 times since the opening day. It may now be time for Lopez and Chief Executive Marc Ingla to make a very tough decision.

As the new owners rebranded Lille as a breeding ground for young talent centred around Bielsa’s ideas, they made what now seems to be a mistake in defining their project by Bielsa’s unique style. As a result, to sack the Argentine would seem like a rejection of those ideas and an admission of the ‘project’s’ failure in its current guise, making Lopez reluctant to part with the man he sees as personifying the club’s direction. The worrying thing is, Lille have been saved in recent seasons by a change of manager after similarly abject starts under Hervé Renard and Frédéric Antonetti.

Although they did (as they do now) seemingly have the talent to stay up, a delay might have seen those campaigns play out very differently. Bielsa said last month he would stay with LOSC even if they were involved in a relegation battle, it’s desperately disappointing, but if Lopez doesn’t wise up soon a relegation battle may be all the club is left with. As it stands, it’s a battle they don’t look like winning.

Mauricio Pochettino: “You can’t make a good copy of a Picasso, a Dali.”