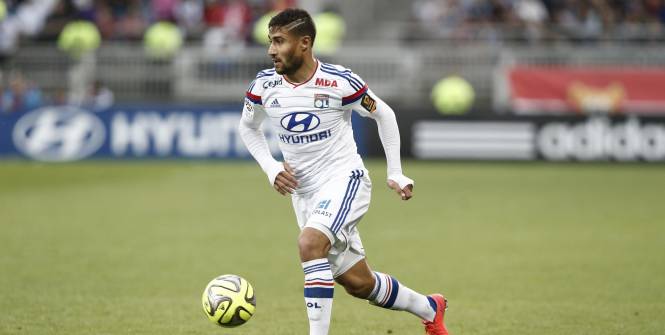 Today, Le Classique, between Marseille and PSG, is understandably the most famous derby in French football but the Rhône Derby between St Étienne and Lyon is by far the fiercest. That reputation was underlined on Sunday night as the latest edition of this vicious rivalry descended into farce and humiliation as Lyon ran out 5-0 winners at St Étienne’s Stade Geoffroy Guichard, an encounter that saw repeated second half flare ups, a sublime display from Nabil Fékir and riot police on the pitch.

Incoming players and coaches of Lyon and St Étienne have the importance of the Rhône Derby rivalry between the two clubs drilled into them from the outset and the feeling that winning this game would be preferable to winning the league for both sets of supporters isn’t far from the truth. However, the pride of both fans and players turned to vitriol on Sunday night as Lyon’s recent resurgence in form and freewheeling attacking football, capped by the 5-goal drubbing, was obscured by violence.

Despite their return to third spot in Ligue 1, just three points behind the current Ligue 1 champions Monaco, Lyon’s start to the campaign has been an undulating one. Their tally of 32 goals aside, performances have lacked the control and assuredness that the departed Alexandre Lacazette, Corentin Tolisso and Maxime Gonalons provided. A trio of 3-3 draws against mid-table sides perhaps highlighting their issues. Nevertheless, Lyon’s replacements have finally started to gel as the balance shifts from erratic to exciting. This was their fourth consecutive win, Les Gones boasting an aggregate score of 15-2 and the scalp of Monaco in that time period.

Before Bruno Génésio’s men were able to continue their perpetual assault on the opposition goal, the evening started in bizarre fashion as thick smoke from St Étienne flares led referee Clement Turpin to halt proceedings just 60 seconds in to the match for 7 minutes. However, when the encounter restarted it didn’t take long for St Étienne to press the self-destruct button and for Lyon to ruthlessly take advantage. Romain Hamouma’s sliced attempt to find a colleague on the edge of the area from a corner woefully ballooned into the path of Nabil Fékir.

As he and his teammates streamed forward, Fékir found Memphis Depay whose pinpoint shot through Roneal Pierre-Gabriel’s legs outsmarted Stéphane Ruffier in the St Étienne goal to opening the scoring with just three minutes of football actually played. St Étienne failed to recover from what was an emotional hammer blow and it was 2-0 less than 15 minutes later. Nabil Fékir, whose form has returned to the brighter end of sparkling this season, tore forward once more, routing the limp St Étienne back line to rifle home from the D.

Fékir’s return to the form that saw him win Ligue 1 Young Player of the Year in 2014/15 as Lyon’s similarly youthful and exuberant side ran PSG close for the French title, has been a long time coming. A disastrous knee injury on international duty halted the stocky playmaker’s meteoric development.

Despite a potholed 22 months in charge, aiding Fékir’s form is one of Génésio’s greatest achievements. The 24 year old has even been made captain, moved into the number 10 role and given the responsibility of dictating play. Génésio has successfully returned his most talented player to talisman status, Fékir’s return to Didier Deschamps’ France squad this week being well deserved.

At 2-0, the game was already over. Oscar Garcia’s St Étienne lacked the gumption to mount anything that resembled a comeback. The normally white hot, incessant din of the Stade Geoffroy Guichard was washed away. While this was a watershed moment for Génésio and Lyon, the same is true of Garcia’s incarnation of St Étienne.

Reinvigorated after the departure of long term boss Christophe Galtier, the squad growing stale in the last 18 months, their bullish displays have descended into the insipid. Garcia’s now finds himself grappling with the same issues as Galtier; a squad devoid of creatively, populated by flaky forwards and, without inspirational injured captain Loïc Perrin, a lumbering clutch of centre backs.

Where the first half was oddly surreal, the second quickly became an embarrassment for Les Verts. Lanky Swiss defender Leo Lacroix was promptly sent off after a rash challenge on Lyon’s tormenter-in-chief, Fékir, before teenage OL midfielder, Houssem Aouar, the Frenchman set to be this season’s breakout talent, set up Mariano Diaz for the third just before the hour. Aouar’s grace and guile was again a stand out feature of this marauding young Lyon side. As Bertrand Traoré whipped in a fourth on 65 minutes any score seemed possible, all of Lyon’s forwards now on the scoresheet.

Cajoling vintage displays from Fékir this season comes perhaps second in Génésio’s achievements to inserting him into an attacking formula that is finally finding some cohesion. The silky smooth passing of Aouar paired with the rugged sentinel, and future OL captain, 20 year old Lucas Tousart, as well as defensive bolstering from Kenny Tete and Marcal at full back, provides Fékir with a solid base to orchestrate a front three overflowing with flare, pace and trickery. While this attacking trident remains tinged by youthful naivety, they are rapidly becoming unplayable in Ligue 1.

Dominican Mariano Diaz’s power and intensity has seen him net nine times in Ligue 1 since his move from Real Madrid this summer, fellow new man Bertrand Traoré’s rangy physique, directness and speed is a dangerous blend cutting in from the right while the astonishing rebirth of Memphis Depay in recent games has seen the swagger and panache that Manchester United fans rarely enjoyed return in abundance. Moulding such an inexperienced and potentially fractious group into an effective attacking ensemble is proving to be quite the feat.

With St Étienne already routed, Fékir rounded off one of the host’s worst nights in their recent history, angering St Étienne ultras in the process. Lyon’s captain had the time to sit his opposing skipper down and calmly slot home for 5-0. In celebration, Fékir removed his shirt and held it up for the St Étienne fans to see, mirroring the now iconic image of Lionel Messi at the Bernabeu, goading Les Verts’ most prominent ultras.

Some of their number proceeded to vault barriers surrounding the pitch before the game could restart, forcing swathes of riot police to also enter the fray and block their advance. Lyon players swiftly exited before referee Clément Turpin led the remaining St Étienne players off with four minutes to play. St Étienne ultras have a chequered recent history; breaking into the Stade Geoffroy Guichard as a match with Rennes was being played behind closed doors as a punishment for violence in last season’s derby being a recent example of their overzealous attitude.

As Le Chaudron slowly emptied it seemed the match would not be completed. However 30 minutes later a handful of remaining St Étienne fans, along with the full complement of their Lyon counterparts, who were sensibly kept inside the ground throughout, witnessed the eerie spectacle of the final few minutes being played out in a sparsely populated stadium as local time edged towards midnight. Lyon, with salt aimed firmly at wound, even went looking for a sixth.

Whether Bruno Génésio can maintain his side’s glorious attacking form remains to be seen. Génésio’s management has repeatedly been questioned since he was promoted from assistant coach upon Hubert Fournier’s sacking over Christmas 2015. Nevertheless, a brace of own goals in Paris represents OL’s sole league defeat while their European form remains impressive and if Fékir, Depay, Aouar and co can keep this up St Étienne won’t be the last team they humiliate this season. However, as Fékir’s ill-advised celebration shows, this enthralling, youthful side still have something to learn.

1 | Paris Saint-Germain’s 5-0 win over Angers meant that the capital side kept a seemingly inevitable march towards the league title moving apace. Monaco, however, proved that the two teams’ encounter a fortnight from Sunday could keep the champions in the race. Even without the injured trio of Radamel Falcao, Thomas Lemar and Djibril Sidibé (and the suspended Jemerson), Monaco ran riot against Guingamp, thrashing the Breton side 6-0. Guido Carrillo led the line effectively with a brace, and Almamy Touré added three assists, but each has been effective despite limited playing time. A player who looks set to be changing the narrative surrounding his ability, however, is Adama Traoré.

The Malian international has seen his stock plummet since winning the Golden Ball in the 2015 U-20 World Cup, as injuries and form saw him unable to break into the first team at Monaco and similarly failing to impress on loan in Portugal last season. Playing as a number ten on Saturday, Traoré sparkled in a more advanced position; despite being an impressive creative force for his country, he has generally been used in central midfield since arriving from Lille. Being deployed in a deeper, unfamiliar role has done little for his confidence, but if he can continue to show this sort of form in attack, he can yet earn a bit of redemption by displaying his ability going forward when called upon by Leonardo Jardim.

2 | Lille managed their first win since the season’s opening matchday on Sunday, defeating hapless Metz 3-0. Rumours had swirled that had Les Dogues failed to record a victory away to the bottom side, Marcelo Bielsa’s job would have been in real jeopardy. Given the investment made in support of the Argentine, it is unlikely that things would come to a head so quickly, but there was inarguably some real doubt beginning to evince itself as the club’s decent performances were often being squandered by the lack of a goal-scoring threat. The late sale of Nicolas De Préville to Bordeaux left the team without an orthodox front-man, and goals were at a premium as Bielsa continued to play summer signing Nicolas Pepé, more of a wide player than a striker, and not one with an impressive goal record at that, up top.

Pepé finally broke his duck on Sunday, and while he was far from impressive, scoring first from the spot and then from a poor pass to beat a stranded Thomas Didillon late on, a notching a brace will have done his confidence a world of good. Lille are far from out of the woods, but a game in hand against Amiens and a home match against floundering Saint-Étienne means that relegation can be avoided, and even a European challenge isn’t out of the question. Should Lille win their game in hand, they would be just six points from sixth place; the season’s start has been far from comfortable, but Bielsa’s methods might yet pay dividends.

3 | Unsurprisingly, all of the top five sides in France won at the weekend, and most of them, save Nantes, by comfortable margins. Les Canaris were the only side to concede, and the collective of they, Marseille, Lyon, Monaco and Paris Saint-Germain won their matches by an aggregate 23-1. Those results also opened up a five-point gap between fifth-place Nantes, on 23, and Saint-Étienne and Caen on 18. Both Les Verts and the Norman side boast negative goal differences as well. Admittedly some of that is down to their poor results from this weekend, but it does remain a potent reminder of what seems to be a widening gap between the haves and the have-nots in Ligue 1.

Aside from Lille’s €65m outlay this summer, Lyon, Marseille and Monaco comprise, despite their raft of departures, the rest of the division’s top five biggest spenders. Nantes are a dogged exception, but as none of their seven wins have come by more than a solitary goal, the sustainability of their approach remains in doubt. Without comprehensive investment, it seems, real success will remain elusive, even in the relatively cash-poor environs of Ligue 1.

Anthony Martial on France call-up: “I am happy, but I also think I deserve it.”