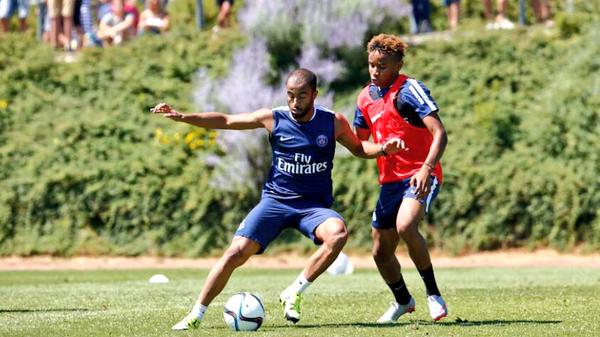 Jean-Kévin Augustin has drawn most of the attention amongst Paris Saint-Germain’s up-and-enoming players after his stunning European U-19 Championship performance this summer, but keen observers of the club will know that despite his impressive statistics, Augustin may not be the brightest prospect on the champions’ books.

Adrien Rabiot and Presnel Kimpembe have, of course, caught the eye this season, but having already received their first senior call-ups from Didier Deschamps, it is hard to call the pair prospects at this point. Those who have watched PSG closely, particularly over the last month, might prefer to nominate Christopher Nkunku for this honour.

Despite being born in the same Paris suburb as Paul Pogba, Nkunku has followed a more gradual (and linear) path to success. Able to play as either a winger or a central midfielder, his versatility has come in handy over the past month, as Unai Emery has sought to compete on multiple fronts whilst balancing injuries to Rabiot and Javier Pastore.

On the left wing, he is superb cutting inside, but can also stretch play by running the channels. In central midfield, he is generally more prosaic than Rabiot, but can get forward when called upon, as his goal against Bastia at the weekend showed.

He was initially given his first chance by Laurent Blanc, and the former manager was effusive in his praise for the youngster after he made his debut against Shakhtar Donetsk in last year’s Champions’ League:

“He’s a player I’ve liked since the first time I’ve seen him. At that time, he was a player that came to help us, with other players from the CFA team. When we are (training) in Paris, with the strength that we have, for a young player, it’s difficult. If you come to a training session, and you aren’t good technically, you will struggle. Immediately, I noticed the ease of his technique and I think I wasn’t alone. The first team players are attentive to the players who come. They look at them, they test them a little bit and eventually, if it suits them, they accept you. I told him, ‘this is the hardest thing for you.’ It’s a nice surprise, he has an important edge on his progression.”

Blanc’s assessment of Nkunku’s progress was borne out by giving the youngster, still just eighteen, a handful of starts toward the back end of last season. The title was wrapped up by that point, but Paris Saint-Germain’s opponents were still battling against relegation and for European places, and Nkunku, playing in central midfield, did not disappoint, turning in efficient, if prosaic performances over five matches.

He also led Paris Saint-Germain to the final of the UEFA Youth League, where, despite losing to Chelsea in the final, he was named to the team of the tournament.

Bizarrely not picked for the U-19 European Championships alongside his clubmate Augustin, he instead went with the first team to the United States, appearing in all three matches as a substitute as a left-sided central midfielder.

He made no great impact, though, and with Emery supposedly preferring a 4-2-3-1, looked set to face very long odds for first team minutes. He remained a regular with the reserves, and continued to play well in the Youth League, patiently waiting his chance.

Emery, despite being embattled, recognized the potential in the youngster as he had from the off, saying after the match against Bastia:

“He started the training with us in preseason. He trained like the other players, he played in CFA, made the bench in a few matches with us. When he had the opportunity to play, he was well-prepared. He listens to progress. Little by little, he progressed. He is a young player, and for the others it is a good example, to continue the task. Football is very nice, but it is difficult to maintain consistency and progression, especially with a team that wants to be the best in the world. He has the quality to play in the axis, better than on the wing. But he played well on the wing because he did the job we asked of him, and which the team needed.”

Emery clearly recognizes the value of Nkunku’s versatility, as even before his recent spell of playing time, he had earned a contract extension through 2020, a move which, given the recent squabbles between the club’s management and Augustin, is not to be taken lightly.

His versatility is certainly an integral part of his recent inclusions, but more than that, Nkunku has a real chance at being a top player, playing as a sort of amalgam of some of his teammates.

Like Blaise Matuidi, he is quick, and a hard worker, with good upper body strength that allows him to compensate for his small frame. This strength, pace and good ability with the ball at his feet make him the ideal conduit to hit teams on the break.

This asset may rarely come into play in Ligue 1, as the champions generally dominate the ball, but as Nkunku develops, and is granted time against teams who similarly control possession, he could be a very important component to PSG finally reaching their stated aims.

Like Marco Verratti, he has a great eye for a pass, with good vision both linking play in midfield and picking out an attacker with a ball over the top. This last skill has gone a bit lacking with the departure of David Luiz, and if the diminutive Italian is absent, the presence and physicality of Nkunku allow PSG to keep turning over in possession.

He is also, however, like both Matuidi and Verratti, not a great a finisher, as even his goal at the weekend had an element of luck to it, although improved scoring totals in this year’s Youth League (5 in four matches) may mean that’s a part of his game which is improving more rapidly than might be observed from his time with the first team.

Still not the finished article, though, there are some rough edges to his game. His tackling, like that of Verratti, can be a bit enthusiastic, and lead to silly fouls. His sense of positioning is the general cause of this, sometimes arriving late to the ball due to being caught in possession or from being too enthusiastic in attack.

This is a small quibble, though and a better reading of the game usually comes with age. He can also be guilty of being a bit one-footed, which saps some of his effectiveness on the wing, but is no real detriment in midfield.

Still competing on four fronts, pending today’s match with Metz, Nkunku’s versatility and motor will be a boon to Emery when needed. Injuries have played a major role in PSG’s elimination from Europe in recent seasons, but an already deep squad will be sufficiently buoyed by Nkunku, who, on the basis of the last month, probably deserves Grzegorz Krychowiak’s spot on the bench in the biggest matches.

He will continue to receive playing time in any event, and it’s not hard to imagine him as the eventual replacement for Matuidi, who is 30 in May, first becoming a regular at a similar age to Nkunku.

Already grasping his chance with both hands, Nkunku’s development, steady as it may be, is rapidly becoming too impressive to ignore, as he, Rabiot and Kimpembe seek to reverse the trend of promising young talent exiting the club.