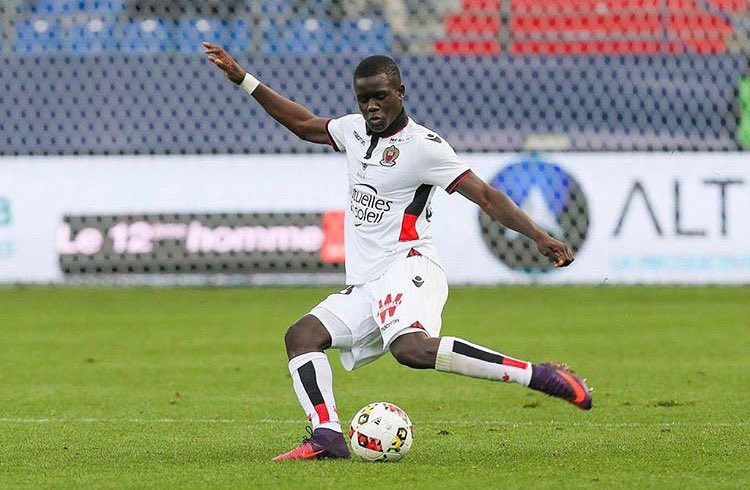 There is nothing more enjoyable in French football than seeing the man with no name on the back of his shirt. It always signifies a youngster that is breaking into the first team, without a professional contract and displaying a number in the 30s on their back as their only identity.

One such player strode onto the pitch at the Allianz Riviera at the start of the season and has pretty much stayed there ever since. Still donning the number 33, Malang Sarr now proudly has his name brazened above it and has caused quite a stir in Ligue 1 at the same time.

At just 17 years old, Sarr was thrust into new manager Lucien Favre’s first ever starting eleven. Sitting in a back three consisting of the new recruit in former Champions’ League winner Dante and Ligue 1 stalwart Paul Baysse, it initially looked like a desperate move.

Have they not got enough cover to play the system Favre wants to play? Is he making a statement that they need more players through the door?

No, the statement was to come from the teenager.

In his first professional game at home against Rennes, Sarr scored the solitary goal of the afternoon with a tidy header at the back post in the second half. It was a wonderful moment as he became Ligue 1’s second-youngest debutant scorer and the story was exacerbated by his gloriously enthusiastic celebration.

It was dedicated to those who had lost their lives in a terrorist attack on Bastille Day just a month prior, a poignant moment that also cemented his place in the fans hearts.

What followed up until the winter break was a string of eye-catching performances that have scouts purring across Europe. While the games racked up, he continued to be a regular starter in all competitions and when Baysse missed a section of the season, he comfortably stepped in to a two-man defence alongside his more prestigious Brazilian teammate.

Les Aiglons then did the inevitable by signing him to a long-term professional deal. Out of the number 34 shirt and into 33, Sarr has remained humble and has gone against common practice by continuing to live at home with his mother.

It shows a great understanding from the young man that nothing is given in the world of football. Surrounded by a wealth of experience, both on and off the field, can only benefit him in the long run.

Despite his age, the youngster turned 18 a few weeks ago, Sarr has the obvious physical attributes you would expect from a centre-back. Tall, broad and quick on the ground, he has a little bit of everything that a scientist would draw up in a laboratory if they wanted the perfect defender.

He still has some growing to do though, that is for sure. He can still be occasionally outmuscled by the bulkier forwards in Ligue 1 and putting on that muscle as he gets older will only enhance the skills he already has.

Sarr’s positioning is creaky, but the foundations are there and a great start for a young central defender. He understands where he need to be in relation to his other defenders both in a back three and a back four, a complex set of ideas for even players in their mid 20s to grapple with and that experience will benefit his career when he is required to be flexible.

It is also highlighted by his 2.4 interceptions per game. He is always aware of where the ball is on the field and where the danger is, vital characteristics if he wants to become one of the best centre-backs in the game.

However, sometimes his youthful exuberance gets the best of him. The willingness to get the ball back for his team can’t be denied but his often-gung-ho approach can be caught out by quicker-thinking players that play around him and into the space he’s vacated, which is especially troubling in a back four.

He is comfortable with the ball at his feet and is encouraged to bring the ball out with him when he can. His passing range is good, able to shift the ball across to the opposite wing back if required and can play into the strikers better than a number of young defenders can.

Again, this has also led to some lapses of concentration, which was particularly on display in a recent game against Bastia. There were seven or eight occasions where he decided not to play a simple pass, electing for something riskier and more penetrating, but was intercepted high up the field that allowed the Corsican’s opportunities for quick counters.

Back to the positives and there is no question that in the air, he is fantastic. Displayed in both boxes this season. Sarr has a great ability to almost float and use his body to generate power and direction as if it comes naturally to him.

The goal against Rennes was the first example, his excellent assist across goal for Baysse to score the opener against Lyon was another, he just excels in that area. That is also not to talk about the countless defensive headers he has made to relieve pressure and he has a real command in that area.

As previously mentioned, he is also surprisingly quick. This helps him catch up with speedy wingers that he has had to face, cover his mistakes but also close down players at pace, which is possibly why he does rush in on occasions as he feels he can cover the ground quicker than the opponent can react.

Some may also say he is a little protected in a three-man defence and while it does free him a little more, he has shown he is capable of playing in a flat back four as well. In fact, he has played at left-back on occasion in the Europa League and showed glimpses that he could even be cover there if need, albeit a more defensive-minded full-back.

So, is he one of Europe’s best defensive prospects? Yes. Will he be joining a big European club soon? Absolutely not and he should stay right where he is for at least a few more years minimum.

The difficulty of nurturing a young defender comes with the old adage that he will make mistakes. You need to ride through it, allow him to grow and he is in the perfect environment for that to happen, both because of the people around him and because of the formation Favre plays to support him as much as he can.

That also means he needs regular football, something he is getting at the Allianz Riviera and something that is not a guarantee elsewhere. His manager put it best after his first game, he said:

“He has potential for progression but there’s physical, technical and mental work to be done too. Beyond that, there are those who make it and those who don’t. You never know what can happen so please don’t talk too much about him.”

Let’s take that advice and simmer on Sarr for a good year or two. Allow him to continue growing and then we can admire what could be a very special footballer in the future.