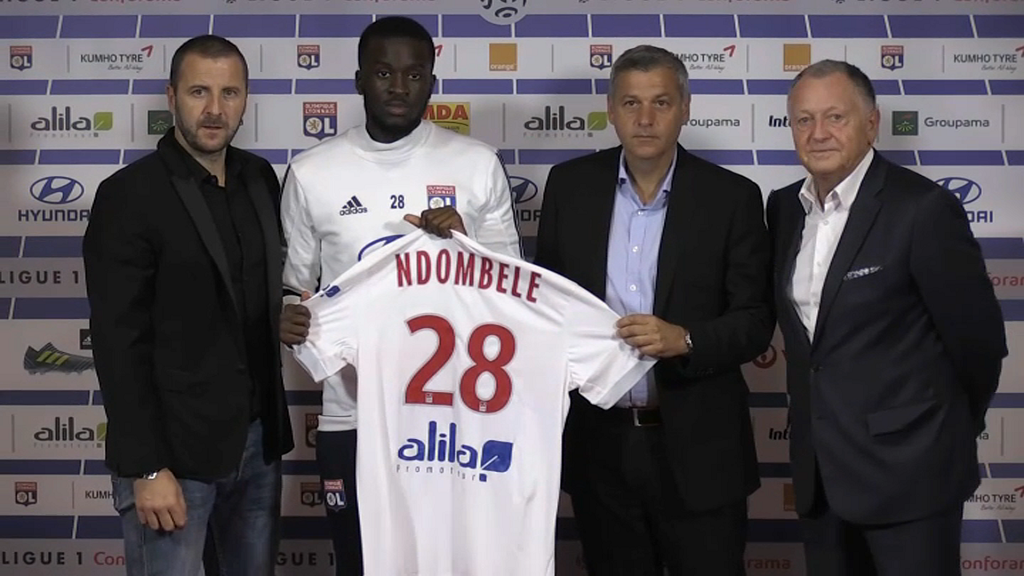 Who doesn’t love a romantic “rags to riches” story?

A tale of someone becoming something from seemingly nothing, from great despair to great success and not many personify that ideal in the footballing world than Tanguy Ndombele.

Back in 2014, the young man from the Longjumeau region of Paris was released by Guingamp. He proceeded to join Amiens, where he played for their B team in the fifth level of French football for the next two seasons.

Around this time last year, Ndombele signed his first professional contract with the then-Ligue 2 side and he catapulted from there. A shining light in their incredible promotion season, which was sealed with the final kick of the final game, he garnered interest from across Europe in the summer.

Les Licornes knew it would be tough to keep hold of him and despite a rumoured €12m bid from Hoffenheim, he joined Lyon on loan for €2m with an option to purchase him outright for a further €8m. Despite that smaller offer, manager Christophe Pelissier adhered to the player’s wishes to stay in France to continue his progression up the footballing ladder.

With Sergi Darder out of the door, a spot was suddenly open in Les Gones’ midfield, one that Ndombele has claimed with aplomb. His breakout performance for many came in his debut against Paris Saint-Germain, where he ran the midfield against the best possible Ligue 1 opposition.

The 20-year-old far from wilted under the bright lights in the Parc des Princes but thrived, controlling the match through good passing, driving runs and a willingness to become an integral part of Bruno Génésio’s side. Having almost scored the opener with a thunderous strike from distance, it’s no real surprise that their more illustrious opponents could only score after he had departed on 72 minutes.

Since then, he’s almost been an ever-present alongside fellow young prospect Lucas Tousart in the heart of Lyon’s midfield. Of his partnership with the academy graduate, Ndombele told a recent press conference:

“Everything is going well, this is just the beginning. My teammates have integrated me well, it’s thanks to them what happens to me. I do not feel overwhelmed by events, I remain focused on football. Lucas Tousart is a more defensive player which allows me to be freer and move more regularly, we get on well.”

His recent form also led up to a call from the French Under-21s squad, making four appearances and starting in recent wins over Montenegro and Luxembourg. That’s even ahead of more established Ligue 1 names like Maxime Lopez.

Ndombele is best described as an industrious midfielder, operating as a box-to-box player being the link between attack and defence. When needed, he can play in more of a deep-lying playmaker role when facing teams with a greater attacking threat, yet has the ability to break into the final third when Lyon are chasing the game.

He’s inventive, always looking to dictate the tempo of a game and create opportunities for his team-mates. You’ll often see him drift into deeper positions for the ball, turn and lift his head up to see which would be the best option to proceed.

If there’s space in front of him, he’s willing to drive into it to pull an opposition defender out of position and even take them on should they be so rash. His close-ball control allows him to somewhat ungainly stride past players that are either too eager to close him down or offer little resistance to his advances up the pitch.

Should there be a chance to play in someone else in behind, he’s good enough with the ball to spray those kinds of passes. He’s always playing with his head up, looking for the opportunity to split the defence and make something happen.

That also ties to his work-rate, as Ndombele is a tireless runner. He’s not afraid to battle, to get stuck in to the less pretty side of the game in terms of tracking back and winning possession for his side.

However, all of those above attributes still have rough edges that need sanding down. When he’s dribbling, he can sometimes find a too-heavy touch in his bundling style that leads him to lose possession or when he’s wanting to play that killer ball, he can often over-hit it or misplace it in his exuberance to do something positive.

The same goes for his tracking back, he can often be caught crashing into his opponent or simply being too over-zealous in the tackle. They are signs of a young footballer stilling ironing out the creases in his jersey but something that can certainly come along in time.

What also needs to improve is his goal-scoring, especially as a box-to-box player. He’s got quality, especially from distance, in striking a ball but two goals in his entire career so far is somewhat of a worry.

The fact he’s playing behind a frightening attacking quartet hides it for the time being but to reach the next level, he needs to contribute more.

As for the future, it’s almost impossible to say. The fact that in a year, he went from the fifth division all the way to near the summit of Ligue 1 might have his head spinning for a while longer yet but there’s yet to be a masterpiece chiselled from what is a quality slab of marble.

Whether he can get to international level remains to be seen, especially given France’s incredible strength in depth, but he also fits the profile of a footballer capable in the future for deputising in Paul Pogba’s place when the Manchester United man is injured.

That might be looking too far so for now, his time will be best served continuing his good work for Lyon. If he can gain more consistency, more confidence in his ability and mature, he has the potential to be a huge part of one of the most promising midfield partnerships in Europe.