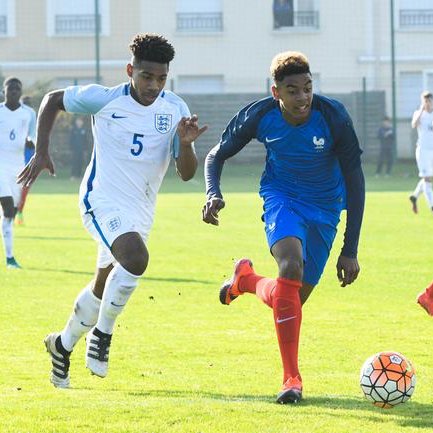 If there’s one thing that the coaches and educators in Olympique Lyonnais’ prestigious academy know about, it is how to nourish world-class attacking talent. Over the last two decades, the Groupama OL academy of excellence has seen the likes of Karim Benzema, Ishak Belfodil, Anthony Martial, Loïc Rémy and of course Alexandre Lacazette pass through the club’s development programme with flying colours.

It would not be an exaggeration to say that in a city that prides itself as France’s culinary capital, the academy has produced a number of players with a more than obvious taste for goal.

Fifteen-year-old Willem Geubbles looks like he could be the next OL youth product to strike fear into the hearts of defences around France in the future. As a result of his glistening form, the 2001-born player is the youngest individual to be selected in the France U17 squad that will take on Belgium in a double-header of development matches in Britany in the first week of February.

Born to the north of the city in the suburb of Villeurbanne, Geubbels joined Les Gones ‘ in 2010, at the tender age of just nine, and he has since spent six years developing his talent at the club.

Following an impressive 2015-2016 season, the youngster was promoted to the club’s U17 squad for this season from the U15, and he hit the ground running from the start.

Despite his young age, Geubbels is blessed with an already imposing physique, standing at around six feet in height, and this combined with blistering pace has made marking him an extremely difficult task for his counterparts in youth development league matches.

After netting six goals in the first three matches in Group C of the National U17 Championship, Geubbels’ rising reputation and impressive form did not go unnoticed. In September last year, he was selected by Patrick Gonfalone to represent France at U16 level for the first time. Staying true to his form, he scored on his debut in a friendly away match against Scotland.

The opening goal in what was a routine four-nil victory for the visitors showcased Geubbels’ talent perfectly – towering above most other players on the pitch, he muscled his way through the defence to reach a through-ball before coolly slotting the ball past the keeper with the outside of his right boot. Incidentally, the goal was the first international strike ever recorded at Scotland’s Oriam National Performance Centre.

Following his impressive debut showing, Geubbels was once again selected to represent Les Bleus, this time on home soil, in the prestigious Val-de-Marne U16 tournament.

The Lyonnais once again impressed, scoring a double in a memorable four-three victory for the home side against a physically-imposing Russian eleven. He would go on to make two other appearances against England and the USA, aiding his side to once again be crowned tournament champions.

Returning to domestic matters, the young striker capped-off what was a memorable November by netting a goal in his side’s four-nil derby victory against Saint-Étienne in the U17 National Championship.

On the back of such an impressive start to the season at U17 level, some may say that it’s perhaps not that surprising that Geubbels has been called-up to the international squad for the same age category.

It must be remembered however that a year makes a big difference in youth development football, and this call-up is testament to belief that the FFF has this young player’s potential.

Perhaps Lionel Rouxel, the France U17 selector and something of a legendary Guingamp striker, sees bit of himself in Geubbels.