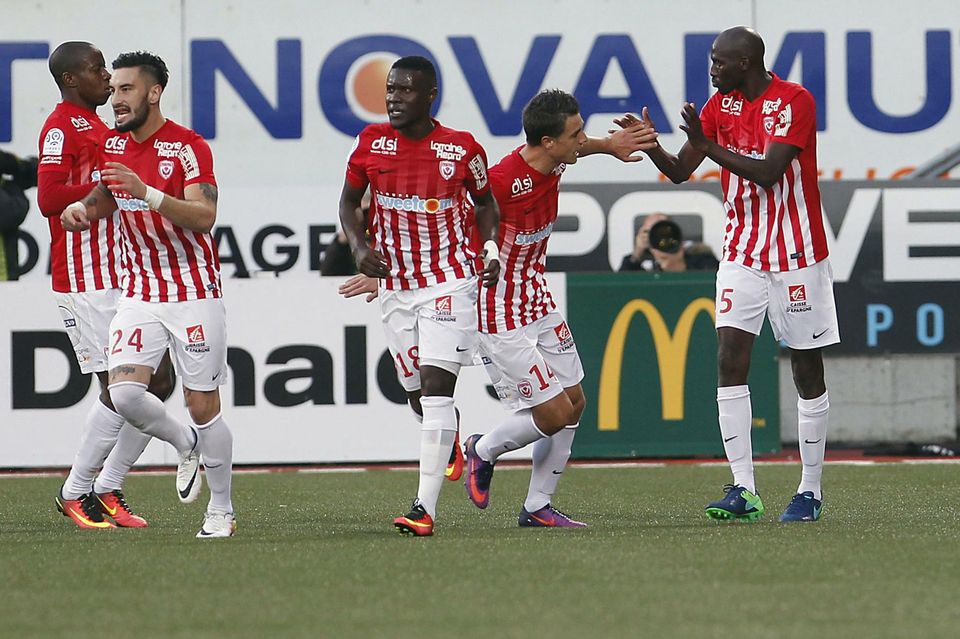 It is always relatively dangerous to make projections in the lower half of France’s premier division as anything could happen the coming weekend and the amount of participants may vary from one week to another.

However, the league table during the international break left us with a 4 point gap between 16th placed Caen and Dijon who sit on an edgy 17th position thanks to a better goal difference. This entry will hence focus on the bottom four knowing full well that the likes of Lille, Montpellier, Metz and Caen could be sucked in the race not to go down.

Nancy vs Lorient: the result that changed everything

This result went somewhat under the radar but Lorient’s epic and dramatic 3-2 win at Nancy after being 2-0 down up until the 66th minute has comprehensively changed the faith, stamina and, maybe, destiny of both clubs situated on opposite sides of Northern France.

Nancy were not high flying before hosting Les Merlus. They had gained a point in seven games (a 0-0 home draw against Toulouse on February 25th) and had been beaten by all the sides looking to avoid the drop (0-3 against Montpellier, 0-1 against Caen and 1-2 against Lille). 2-0 up with three quarters of the game gone against a side that stood six points below them at kick-off, was a great situation to be in. The end result is of course catastrophic for the side from Eastern France but the aftermath is almost worse: Pablo Correa was seen having a vehement conversation with his chairman, Jacques Rousselot in a damaging video.

Two notable utterances from Nancy boss Correa came out of this video:

1 | “The players are not good enough to play in Ligue 1”. Is this true? He had harsh words for Nancy’s Belorussian goalkeeper Sergey Chernik but he was only stepping in for Guy-Roland N’Dy Assembé, an experienced and reliable shot-stopper. He does not single out other players probably because the examples of below-par performers are not that easy to come by at Nancy this season. Are players like Chrétien, Cuffaut, Muratori, Dia, Diarra, Pedretti, Puyo, Robic, Dalé, Hadji or Mandanne not good enough for Ligue 1? I honestly think that they are of the required standard.

2 | “We have a worse side than last season”. Here are the 11 players who played the most games in Ligue 2: N’Dy Assembé, Dalé, Cétout, Lenglet, Muratori, Ait Benasser, Hadji, Pedretti, Robic, Guidileye and Chrétien. Of those 11 players, 5 of them were on the pitch against Lorient, the rest were either injured or suspended (excluding Lenglet who was sold to Sevilla in the January transfer window). What exactly is Correa implying? That the batch of players that got him promoted have all aged badly? Quite unfair.

Furthermore, did Correa just pull out excuses during this exchange with Rousselot? Those two reasons seem to be almost too easy to say to your boss so that he does not fire you. Bit of a get-out-of-jail card from Correa: “Yes, we lost and we’re in a bad way but it’s not my fault. The players are rubbish!” I wouldn’t be too impressed if I were Rousselot…

What can the Nancy chairman do though? He may want to think his decision though before sacking the Uruguayan. Getting rid of a manager so late in the season generally is not a smart move in Ligue 1, not to mention that Nancy and Correa need each other. Nancy aren’t much of a French top flight club without the Uruguayan manager and Correa is very much your one-club-manager à la Guy Roux. He tried to manage at Evian and that did not go well. Nobody in France sees him thriving anywhere else in all honesty.

Maybe Nancy are just not used to sides still ready to fight despite being two goals down with 20-odd minutes to go. What is certain is that this video should not have gone viral and it will do the players’ confidence no good. Will this video turn out to be the video that sends them down? To be confirmed.

As for Lorient, that 3-2 win was a sensational smash and grab. If it was to happen though, relegation would not be the end of the world for Les Merlus. One may be surprised that this is their 11th straight Ligue 1 season in a run that includes five finishes in the top half. The departure of Christian Gourcuff definitely had an effect on the club’s drive and they’ve been candidates for the drop since he left.

However, Lorient are used to Ligue 2 and history tells us that they will be candidates for coming straight back up next season. They’ve spent most of their history in the top two divisions and their stay in the 2nd tier has always been more or less short.

SC Bastia: the pride of Corsica

Bastia have not been as consistent. For starters, this is only their 5th season since coming back up in 2011/12 and, prior to this promotion, they spent seven years outside of the top flight – including one season in National in 2010/11 which was swiftly followed by the Ligue 2 title the following year.

The worry about Bastia is that relegation has not at all been their preoccupation since going up. They have finished above 12th in all four seasons since promotion and were 13th in mid-December (which was coincidentally the last time they won a league game: at Rennes 2-1). Then followed a run of five games which either played out as draws (including against 3rd place Nice) or narrow defeats (one-goal margin defeats against Marseille, Nancy and Montpellier). Then February came, which started a more worrying trend of trend.

Despite this, the club remains unbeaten at home in 2017. Perhaps they can rescue themselves if just they can manage to keep 11 men on the pitch for 90 minutes (13 red cards in 30 games this season).

With only one Ligue 1 season’s worth of experience during the past 15 years, Dijon can take pride in the fact that they are much tougher to beat this time around. Indeed, 13 defeats in 29 games is one of the best records of the bottom half of the Ligue 1 table. This can be explained by quite a myriad of tough defenders and one of Ligue 1’s most underrated performers during this campaign in goalkeeper Baptiste Reynet. They are also most unafraid of scoring goals: with already 38 to their name in that regard, Dijon are Ligue 1’s 6th best attack!

In terms of sequences and league position, Dijon have been quietly pressing on but are not showing enough solidity consistently to avoid defeat for more than a couple of games (bar a 6-game unbeaten run back in September). Lately, Dijon are four games without a win with a run of three straight defeats halted last weekend by a draw at Rennes (1-1).

2 weeks ago, they lost 0-1 at home to Saint-Étienne, a very dull game that probably should have ended goalless. Dijon need to be careful as that point lost could turn out to be more valuable than people might currently think.

N.B. I had to update this entry from last week as I sincerely didn’t expect Lorient to win at Nancy (Correa did, obviously). This result does change a lot as anything else would have doomed the Merlus entirely. The truth is, Lorient can now look forward to this weekend’s home game against Caen with much more optimism and Nancy need to bounce back at Guingamp (not easy, Guingamp have lost just 3 home games this season). Bastia are not down yet because, as said, they just do not lose at home. A win against Lille is possible. Meanwhile, Dijon will have a tough time at Marseille.

The joy of Ligue 1, that is why we love it, because who really knows.

Exclusive | Frédéric Bulot: “Reims did not give me the necessary treatment because my contract is ending.”