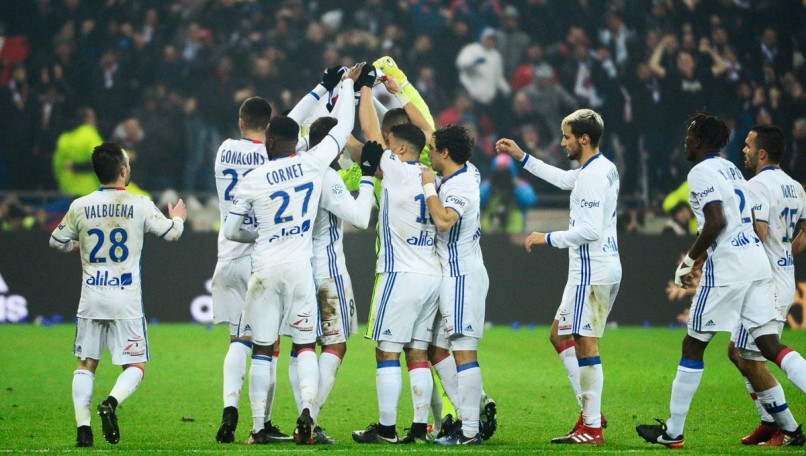 While not a match for the ages, Sunday night’s “Olimpico” between Lyon and Marseille offered a stark contrast between ambition and reality. Marseille, newly under the ownership of the American Frank McCourt, have been attempting a big splash in the current transfer window, most notably in their clumsy pursuits of Dimitri Payet and Jordan Amavi.

Morgan Sanson, the promising former Montpellier youngster, is one player who has joined the club definitively, and featured from the off at the Parc OL. However, he did not exactly cover himself in glory, and his situation provides an ideal lens through which to examine both the match and the two giants.

Marseille’s pursuit of Payet, on the heels of a superb European Championships, has only come to the fore recently. His English club, West Ham United, had a superb season in 2015-16, finishing just four points off fourth place. Payet was named in the PFA Team of the Season, the first player from the club to be honoured in the top flight since Trevor Brooking, but his star has waned since the beginning of this campaign. Plagued by an indifferent attitude and inconsistent performances, he is, at 29, still a box office attraction as a French international, and a former Marseille player with strong links to the city.

However, Marseille have so far failed with successive bids to meet West Ham’s asking price, embarrassing themselves in the process. A public rebuke from Aston Villa chairman Tony Xia has similarly bedevilled l’OM’s pursuit of Amavi, and the club, with McCourt under pressure to make some sort of gesture to improve the team, brought in Sanson for a fee rising to €12m.

Thus, the arrival of Sanson became a positive that McCourt and his newly installed hierarchy of President Jacques-Henri Eyraud and Sporting Director Andoni Zubizarreta could cling to in the face of rejection. Still just 22, Sanson is a talented all-action midfielder, superb at breaking up play and starting a counter-attack seemingly at will.

He was an Under-21 French international for almost three years, and despite losing his place with Les Espoirs to the likes of Lyon’s Corentin Tolisso and Paris Saint-Germain’s Adrien Rabiot following a severe knee injury suffered almost two years ago, he is still viewed as a very intriguing prospect by keen observers of Ligue 1. That said, despite a decent season with Montpellier, he would struggle to get into the team at either of France’s top two teams, Monaco or Paris Saint-Germain.

It seems heartless to author a takedown of Sanson, who only joined the club officially in mid-week, as a symbol of Marseille’s frustration. However, the fact of the matter is that to realistically compete for a place on the podium in France, Marseille will not be able to make do with players like Sanson.

This is not to imply that Lyon, with their own purchase of Memphis Depay, necessarily occupy another tier in terms of quality in France. Only that for Marseille to reach their stated ambition of having a “Champions Project,” they must not only significantly narrow the gap between themselves and the top two but also open one between themselves and the likes of Lyon and OGC Nice, who were in first place until last weekend.

Marseille may be ambitious, then, but the quality of the squads on display at the Parc OL accentuates just how hard it will be to close that gap. On a frosty night in the Rhône valley, Marseille started with an aggressive press, led by Sanson, who was playing on the left side of midfield in manager Rudi Garcia’s preferred 4-3-3. Lyon’s back line, missing the injured Mouctar Diakhaby and the Africa Cup of Nations absentee Nicolas N’Koulou, failed to respond well, with both full-backs joining the central partnership in hoofing the ball long.

That partnership featured young Argentine Emanuel Mammana, making his first appearance in two months and former Newcastle player Mapou Yanga-Mbiwa. Both are accomplished enough, but had never played together prior to Sunday, making their nascent relationship the obvious weak link for Lyon.

For the first twenty minutes, Marseille had the better of the match, forcing Lyon ‘keeper Anthony Lopes into a string of saves whilst generating little going forward. Slowly but surely though, Lyon began to creep into the game, although it was not easy. Playing in what was listed as a 4-4-2 but functioned as more of a 4-4-1-1, with Nabil Fékir and Alexandre Lacazette, the nominal striker partnership often drifting wide or dropping deep, the hosts created little in the way of meaningful chances in the early going. Lyon’s players often found themselves with the ball in dangerous positions; both the centre backs and midfield pairing of Tolisso and Maxime Gonalons did well to find the wide players with balls over the top.

However, those wide players, Mathieu Valbuena and Maxwel Cornet, were having a torrid time. Some of this was of their own doing, as both were frequently guilty of taking an extra touch to shift the ball onto their favoured foot, but much also had to do with Marseille’s bright start to the match. Youngster André-Frank Zambo Anguissa, deployed in an unfamiliar role in front of defence, was a rampaging menace, charging about with aplomb to win tackles and break up play.

So exposed when their full-backs got forward last week against Monaco, the mobility of Anguissa and forceful play from Marseille’s centre backs allowed the visitors to stay tight at the back, at least initially, suggesting that the suspended William Vainqueur might have a battle on his hands to regain his place in forthcoming fixtures.

Even though Lyon were not at their best, it soon became apparent that the more they attacked, the weaker their opponents’ resolve was growing. In the first half, Lyon took up increasingly promising positions, but were often stymied by a “too many cooks” approach, with all four attackers getting into the box.

Alexandre Lacazette was none too shy about expressing his displeasure with this tactic, even though he would have felt appeased by Mathieu Valbuena’s sublime opener on the stroke of half time. Cowed by going behind, Marseille, already sitting a little deeper in the second part of the first half, soon dropped their press entirely, with Bafétimbi Gomis’ half-hearted attempts at pressure comprising only the slightest nod to the frenetic pace of the match’s early stages.

A similar situation had unfolded last weekend against Monaco, with Bernardo Silva’s goal coming at a comparable time to Valbuena’s and Marseille, despite playing a combative first 45 minutes, were unable to sustain the manic pace which masked their lack of talent. Encouraged by the space newly afforded to them by Marseille’s dropping back, Gonalons and Tolisso drove forward, compressing the pitch and thoroughly overrunning the mediocre duo of youngster Maxime Lopez and Sanson.

Marseille went further behind on the hour mark, as Sanson, desperately trying to make a mark on the match after slipping into anonymity, lunged to block Gonalons’ through ball for Valbuena, tipping the ball into the path of Lacazette, who promptly scored. Marseille did pull a goal back as Lyon snatched at clearing the ball from a set piece, but the result was never in the balance, and Lacazette’s second, after a suicidal back-pass from Doria, seemed almost inevitable, settling the score at 3-1. The difference in the fortunes of the two, Lacazette and Sanson, thus mirrors the disparity between the teams.

Mercurial and sometimes a bit melodramatic, Lacazette can be a picture of frustration at times, but his goal record speaks for itself. Sanson is full of potential, but his future is far from certain; he will only be able to realize it with the right degree of circumspection.

So too his club; rather than quixotic chases of marquee players, Marseille need to build holistically, eschewing the metaphorical desperate lunge. Making Sanson the first of many signings who boast both potential and experience would be a decent beginning to this approach. However, improving a ramshackle defence would be a better statement of intent than bringing in the flash of Payet. After the match, Garcia put his club’s loss down to “small margins,” but the difference between Lyon and Marseille, and similarly the task facing McCourt, as the evidence showed, is far from small.

1 | Angers’ coach Stéphane Moulin took the unusual step of deploying centre back Mateo Pavlovic in the centre forward role for the trip to Saint-Étienne, in an attempt to combat his lack of striking options. Remarkably, Pavlovic repaid his manager’s faith with a towering first half header but a pair of ricochets, one from a Romain Hamouma cross and the other off captain Loïc Perrin’s wrist gave the opposition a fortuitous, but much needed, three points.

2 | Leonardo Jardim’s irrepressible Monaco continued their goal-scoring exploits in unceremoniously dispatching with struggling Lorient on Sunday lunchtime, adding four unanswered strikes to their tally of 60 from the previous 20 Ligue 1 games in 2016/17.

3 | Genuine goal-scorers are rare in Ligue 1 but Metz’s new signing, Cheick Diabaté, is one such man. The rangy Malian was a constant threat during his six seasons at Bordeaux with 66 goals in 152 games. An ill-fated summer move to Turkey and Osmanlispor has seen him swiftly return to France and back on the scoresheet this January, bagging a debut brace in a 2-0 triumph over Montpellier to lift his new club out of the bottom two. Diabaté will be key to Les Grenats’ survival hopes, if they can keep him fit…

4 | A pair of disastrous away losses at Guingamp and Montpellier in December had reportedly put PSG coach Unai Emery on the brink before the winter trêve. However, the turn of the year has seen a handful of impressive displays from the Ligue 1 champions including a Julian Draxler-inspired victory at Rennes and an Edinson Cavani brace in a routine 2-0 win in Nantes this weekend to put the champions back on track. An otherwise unremarkable encounter will be remembered for a baffling passage of play which saw Marco Verratti kneel to head the ball along the ground back to his goalkeeper, Kevin Trapp, in a bid to circumvent the back-pass rule. The Italian was subsequently booked for unsportsmanlike conduct, amid vehement protests from his Paris colleagues. His action was considered to be a form of ‘trickery’ and not in the spirit of the laws of the game.

5 | “So racism is legal in France? Or only in Bastia?” asked Nice’s Mario Balotelli on social networking platform Instagram after Friday night’s draw in Corsica, the Italian claiming to have suffered racial abuse from the home fans. SC Bastia later responded by saying they were “astonished” by Balotelli’s claims which “carry considerable harm to the [club’s] image” and the LFP released a statement condemning “with the utmost firmness the perpetrators of these acts, who have no place in a football stadium” before launching an investigation. During the 2007-08 Ligue 2 campaign, SC Bastia were deducted two points after supporters racially abused a Libourne St. Serin player.

6 | The frozen pitch at Stade Michel d’Ornano resulted in the postponement of Nancy’s Saturday night trip to Caen, the home side’s second such situation of the winter after fog put paid to their tie with Nantes last month.

7 | Lille’s new owner, Gérard Lopez, remained coy over the potential appointment of his friend and former Marseille coach, Marcelo Bielsa, stating that he has a ‘verbal agreement’ with the Argentine but is also pursuing other options. A summer arrival now looks more likely for “El Loco”, with Patrick Collot remaining in interim charge of Les Dogues in the meantime.