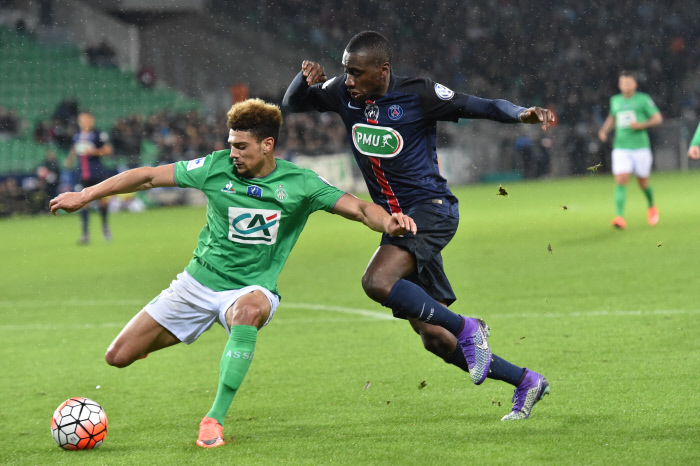 Kévin Malcuit’s flashy style is hard to ignore, the Saint-Étienne right back’s shock of bleached hair ever-present shuttling up and down the flank, but is there more substance than style to his game these days? Links with West Ham and Newcastle have appeared in the recent past, with the Magpies’ bid likely contingent on promotion, given a rumoured €10m price tag, but has his evolution reached a point where he could realistically make the leap to the Premier League?

The answer here is yes, as Malcuit, even at 25, is demonstrably still a player hungry for success and eager to continue to better his reputation not in only in Ligue 1, but to the world at large, hoping to reach the level of his idol, Dani Alves. Given the spate of light-weight profiles that have emerged about Malcuit for the English audience of late there is obviously a clamour to know more about him, but he still makes an ideal candidate for our Under the Radar series.

Born in the the Paris suburb of Colombes, Malcuit’s early years were spent with Racing Club before being snapped up by Monaco in 2008. He broke through with the south coast club in 2010, although as a striker, but after just a handful of appearances, in conjunction with the club’s relegation and subsequent purchase, he went to Vannes on loan.

His time there was less than successful, and after not finding any takers for his services in Ligue 2, he joined Fréjus Saint-Raphael, then in the third tier, on a free transfer, beginning his conversion to fullback in the process. Malcuit found the move unorthodox, but after two years under the innovative manager Michel Estevan, he was back in professional football, this time playing for the western side Chamois Niortais, in Ligue 2 after a move in 2014.

In 2014-15, he was named France Football’s “Étoile d’Or,” an award given by the venerable publication to the best player in Ligue 2, an impressive achievement indeed given Niort’s middling form. A move to Saint-Étienne followed, but things weren’t always easy last season, as he struggled to displace the veteran Kévin Théophile-Catherine.

Théophile-Catherine is far from a world-beater, but he does provide a steady presence in defence, something which has always been a hallmark of Christophe Galtier’s sides. Even though Malcuit was head and shoulders above the former Cardiff City man going forward, his positioning and discipline meant that his spells in the first team were undone not only by on-pitch competition, but his own rash style of tackling.

Malcuit recorded two red cards in less than 800 minutes on the pitch last year, and while he has matched that total this season as well, he has also featured much more regularly, having made almost thirty appearances across all competitions. His style still needs some refinement, though; his crossing is far from stellar, and despite his blazing speed, his level of actual craft with the ball at his feet can also be underwhelming. This, given his attacking inclinations, can often leave Les Verts in a dangerous position when he is caught in possession high up the pitch, but even these mistakes are becoming increasingly infrequent.

Malcuit has also improved tactically, becoming a key player in a number of different systems, beyond merely as a wing-back in a 3-5-2. While Malcuit had played as part of a back four with his previous clubs, he had to earn Galtier’s trust in this regard. However, he took to the team’s shifting systems like a duck to water, learning to use his positioning and not only his pace to be a competent full-back, alleviating a good deal of stress on the part of Galtier whilst simultaneously demonstrating his own maturing sense of self. As he told 20 Minutes:

“I had the feeling that he only saw me in a five-man defence. It was up to me to prove the contrary. I couldn’t only rely on a particular system to get into the team. I worked a lot in the video sessions and now the coach knows he can set me up in a four or five-man defence.”

Perhaps the best way to summarize Malcuit’s improvement, though, is through the words of his coach. Christophe Galtier, never one for faint praise in his role as Saint-Étienne’s manager, has also been fairly effusive in his praise of Malcuit’s development, telling local paper Le Progrès:

“Malcuit showed last season that he had the ability to be very good on the counter. He has improved in this area because he is the origin of goals and creating dangerous situations; he is starting to erase the mistakes that he makes in the defensive half. He is winning more duels, making fewer fouls. He has shown a degree of important progression. He has the ability (now) to affect matches.”

With Galtier’s own future in question and the riches of the Premier League beckoning, Malcuit has a choice to make this summer, with a move across the channel looking increasingly likely. Before he does, though, take a minute to appreciate his ability in context. As impressive as Malcuit was against, say, Manchester United in the Europa League, he is every bit as ambitious and dynamic most weeks in Ligue 1.

It would be folly to name him the best right-back in the league, but he is certainly in the discussion, especially given the inconsistencies and injury faced by the likes of Serge Aurier, Thomas Meunier and Ricardo Pereira. With just a bit more attention to detail and perspicacity, Malcuit could yet surpass that trio, showing football fans around the world his abilities on a bigger stage.