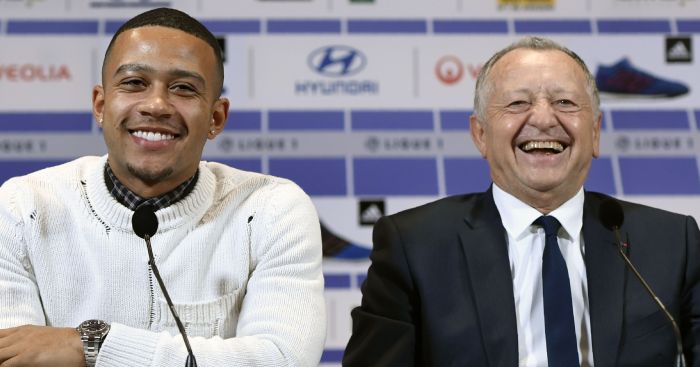 Lyon suffered another loss at the weekend, their fourth in five matches, all but ending their hopes of qualifying for the Champions’ League for a third season running. There had been noise after the previous weekend’s loss to Saint-Étienne surrounding comments made by Alexandre Lacazette about the striker’s seeking a bigger club, and he unsurprisingly received some boos in the team’s home win over Nancy midweek.

There was also the distraction over the suspensions of Rachid Ghezzal and Corentin Tolisso, both players having been sent off in the derby. Ghezzal’s unresolved contract situation also loomed, and the Europa League, once a somewhat unwelcome distraction now took on greater importance, if not as a means to Champions’ League entry, then at least as a respite from the team’s domestic woes.

In the midst of this tumult, in the win against Nancy, Memphis Depay scored for the first time for the club. The goal surely came as a massive relief to the winger, but is there more than a coincidence that the Dutchman’s arrival has coincided with Lyon’s marked downturn in form?

There have been impressive passages of play, most notably early in the match against Lille, when he and Lacazette played some sublime combinations, but overall, his arrival has had little positive impact. Yes, he did score against Nancy, but with the massive caveat that Pablo Correa’s team, overwrought by injuries, were playing an experimental 3-5-2 with no established centre backs in the side; a thumping victory on the part of the hosts was all but inevitable.

With a now-growing body of evidence, it is time to take a more critical look at Depay’s transfer, offering some context and critique. His arrival, despite a seemingly small sample size, seems doomed to fail, especially when considering Lyon’s recent record with transfers. Depay celebrated his 23rd birthday Monday, so his age his is a seeming positive, but it is important to remember that more important than his age is his experience with first team football, which will have influenced his development more than simple maturity.

His eighteen months in Manchester saw him become an increasingly peripheral figure, reduced this season to only the odd substitute appearance, a combination of the emergence of Marcus Rashford, a new tactical system, and the arrival of José Mourinho.

However, with PSV, he played more than a hundred first-team matches, becoming a firmly-established first team player. Not yet a veteran, it would be unfair to imply that Depay is still a prospect, and in this regard, he should be placed alongside players like Claudio Beauvue, Rafael and Sergi Darder.

That is to say, players who retain some, or indeed, much of their career ahead of them, but also have a significant body of work upon which to be judged. Their signings should be well-informed; Lyon can see how the players have performed in different competitions, tactical situations and under different managers.

They are not yet veterans who can subsume their individualism for the good of the team (cf. Jérémy Morel, Christophe Jallet, Mathieu Valbuena) but are also not so young (Maxwel Cornet, Emanuel Mammana) that their potential best days are still years away.

However, along with that, even if the player is still fairly young, they will have naturally developed some sense of self owing to a wealth of time playing first-team football. Even if that individuality isn’t, per sé, a selfish force, it does hinder to at least some extent the ability to mold the player in any significant way. Claudio Beavue’s issues were larger than that, but the failure of Darder, a player whose arrival was accompanied by less fanfare but a similarly outsized transfer fee (€13m) to deliver with any meaningful impact paints a similar story to that of Depay.

Used as part of a central partnership in a 4-2-3-1 at Malaga, Darder has struggled to adapt to a more physical game in France, lacking the combative style necessary to succeed in a system that favors a direct approach. He may yet come good, but it’s looking increasingly as if he will find success hard to come by at the Parc OL, unwilling or unable to alter his play to fit Lyon’s approach.

Like Depay, he was already well-established, having been a regular for two full season at Malaga, as well as a Spanish U-21 international. While undoubtedly talented, Darder’s struggles to adapt are a bad omen for Depay, who likewise needs to be shoehorned into an unfamiliar system.

Lyon have admittedly tried a 4-3-3 similar to the one that saw Depay’s best days at PSV, but that has meant dropping one of Nabil Fekir or Mathieu Valbuena. Despite the two having struggled with injuries this season, Valbuena has seen a marked upturn in form over the past two months, being probably Lyon’s best player in that period.

Fekir’s success in the past and his standing as an academy product will also give him added importance in the team’s hierarchy, despite being off the boil for much of the season. For Depay to come into this situation, now, especially when his formative years at PSV saw him privileged as the attack’s focal point and he should operate as a fourth option at best for Lyon means he will have to fight a pitched battle to succeed.

A change in manager or indeed in teammates come the summer could yet improve Depay’s situation, and some optimism should remain. However, even in these early days, his seeming lack of flexibility and willingness to subsume his individuality as part of a close-knit Lyon side may mean that he is already doing irreparable damage to his situation in the club.

Thus, by flaunting his individual style in a team stocked with academy graduates accustomed to having earned their place in the side through hard work, Depay is potentially making his ballyhooed transfer as ignominious as that of similarly experienced failures such as Aly Cissokho and Ederson.