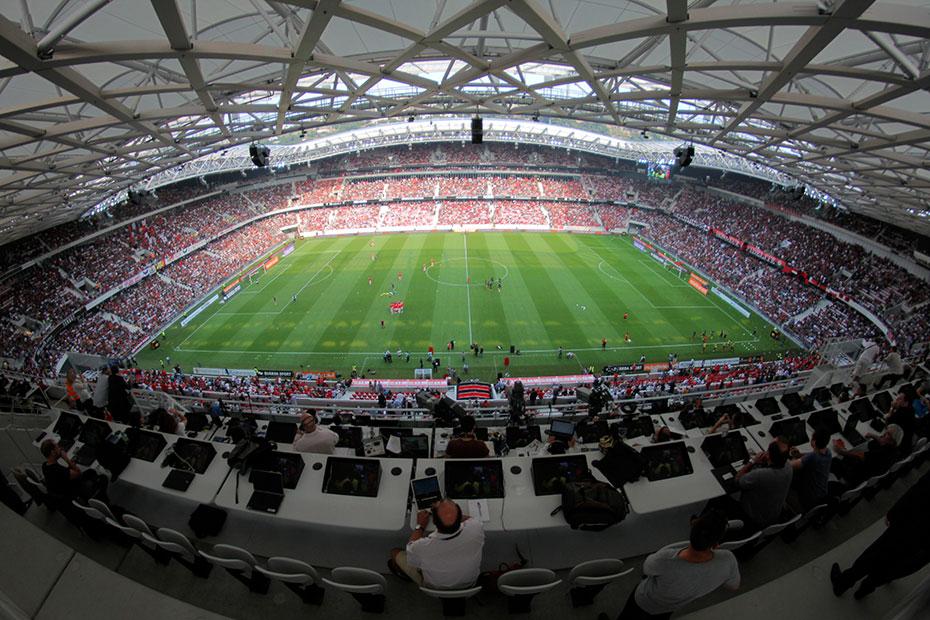 Nice enter Thursday’s Europa League tie against Russian table toppers Lokomotiv Moscow with the feeling that if they fail to make a deep cup run, then the chances of Lucien Favre choosing to remain with the French club at the end of the season are slim to none. Favre has already attracted interest from the likes of Borussia Dortmund in the past, and the disappointments of this season will have only strengthened the growing sense that he is destined to leave Nice. Last season was filled with promise for Nice. They played brilliant football under the stewardship of Favre, and their smart transfer business and talented squad made them the darlings of European football alongside fellow French side AS Monaco.

However, after looking at Nice’s current predicament, one cannot help but wonder if last season was simply an aberration rather than a glimpse of the club’s future. Nice have suffered this season for a multitude of reasons with one of the bigger ones being their surprising failures in the transfer market. The loss of Ricardo Pereira thanks to the expiration of his loan was unavoidable but the loss of Brazilian left back Dalbert and the subsequent failure to sign an adequate replacement is unforgivable.

Nice’s backline has been rocked by the departures of both full-backs and the inevitable aging of club captain Dante. In addition, the decision to let Paul Baysse leave the club on a free transfer has been brought into the spotlight with current defenders Marlon and Maxime Le Marchand both looking painfully out of depth. Further up the field, Nice have also faced problems. Star midfielder Jean Michael Seri was subject of a well-documented transfer saga during the summer and speculation about his future has continued throughout the season.

Perhaps not surprisingly his form has suffered and it looks almost certain that he will leave during the upcoming summer transfer window. Alassane Pléa has struggled to replicate last season’s goal-scoring form, while Mario Balotelli has done his best to pull  Nice out of their current hole but has faced despicable racial abuse from opposition fans and seemingly received very little support. All these factors, combined with bad luck have caused Nice to sit in a disappointing 9th position with little hope of European qualification. Their last glimmer of hope lies in the shape of a successful Europa League campaign, a route Lucien Favre would have hissed at during the end of last season.

Nice face a strong Lokomotiv side who, under the guidance of coach Yuri Semin, have catapulted from a 12th place league finish last season onto the top of the table, and currently sit eight points clear of second place Zenit Saint Petersburg. Lokomotiv have been built on a combination of Russian league talent and foreign players who had perhaps faded from the public eye. These men were once a common topic among the casual viewer, but were seemingly destined for obscurity when they left for Russia.

They include former Nice defender Nemanja Pejcinovic, Croatian defender Vedran Corluka, Portuguese midfielder Manuel Fernandes who has enjoyed a career resurgence at Lokomotiv, and Peruvian winger Jefferson Farfan who once terrorized defences for PSV and Schalke 04. While the Russian League is not a commonly viewed league, the Europa league has given Lokomotiv the chance to showcase themselves to the world. After topping their group, Lokomotiv enter this tie with the chance to prove their credentials as a team with the potential to go deep into the knockout stages.

Nice face an injury crisis in defense with Arnaud Souquet, Christophe Jallet and Maxime Le Marchand all missing from the matchday squad. Favre has seemingly settled on the 4-3-3 as Nice’s preferred system and will most likely opt for a backline of Racine Coly, Malang Sarr, Dante and either Marlon or Patrick Burner at right back. Jean Michael Seri is almost certain to start in the three man midfield, but the other two slots could still be up for grabs with Wylan Cyprien, Adrien Tameze, Nampalys Mendy and Pierre Lees-Melou all competing for a starting berth. The front three should contain both Mario Balotelli and Alassane Plea leaving one spot which could go to either Allan Saint-Maximin or Bassem Srarfi.

Lokomotiv are boosted by the return of captain Vedran Corluka and Brazilian striker Ari from long term injuries, although both are expected to start on the bench for the Russian side. They look likely to start in a fluid 4-2-3-1 system with converted winger Farfan starting as striker. Lokomotiv’s main creative threat from midfield will come from Manuel Fernandes who will most likely be flanked by talented young forward Aleksey Miranchuk, currently Lokomotiv’s second top-scorer, and his twin brother Anton Miranchuk.

The Italian striker has been a bright spot in Nice’s turbulent season and seems to have recovered some of the form he displayed early in his career. Balotelli has scored 19 goals in just 26 appearances this season and with his contract expiring in just six months, he could be worth a look for a team in need of a striker. Where his head will be during the tie against Lokomotiv remains to be seen after the disgraceful events last weekend, but there is no doubt that Nice will need him to be at his best if they are to progress.

Farfan’s career seemed to be heading towards a disappointing close after a stint at Al Jazira in the UAE, but his fortunes have changed dramatically after his free transfer to Russia. Farfan was known as one of the most dangerous wingers in world football during his time at Schalke, but has successfully converted into a striker while at Lokomotiv. He is currently their top-scorer with 12 goals in all competitions, four of which have come in Europa League games.

With the return of Ari from injury, Farfan may eventually return to his natural position on the wing, but for the moment he remains Lokomotiv’s focal point in attack and his importance to their chances of winning the tie cannot be overstated.

Nice’s poor form and defensive injuries tip the scales in favour of Lokomotiv. While I do expect Nice to score, I don’t think they have the defensive quality to contain the Russian side and I’m expecting a draw that leaves Lokomotiv the favourite to qualify going into the second leg.

Paul Pogba beginning “to regret his return to Manchester United”