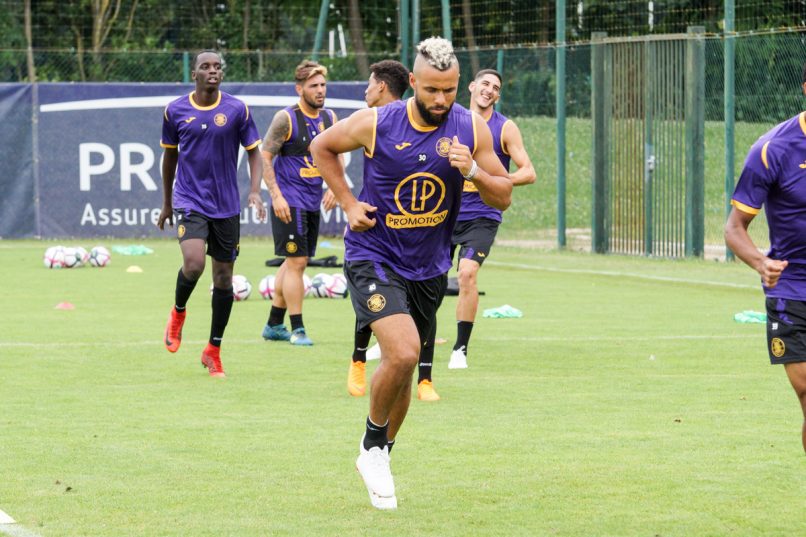 Despite your injury you’ve had an impressive start to the campaign with Toulouse, would you say you’ve settled well into Ligue 1?

I feel like I’ve adapted well, it’s been a simple transition. I’ve played in France before, already worked with the manager and we have a really good group of lads here, so I’ve settled in quickly. Although I did come into pre-season later since I was still nursing an injury from last year, so I had to play catch up a bit.

Despite our heavy loss to Marseille on the first day of the season, we’ve bounced back and shown good character. On a personal level, I think I’m quickly getting to grips with the first division.

What are the club’s aims for this season?

We really want to surprise people. We’ve realised that last season wasn’t a good one, so the club’s brought in new players and is trying something new. There’s a lot of ability here and we’re playing the game in an attractive way, so if we can marry that with pressure and work-rate we can really surprise a few people this season. We don’t want to limit ourselves by putting out a target, but we want to push for something special this year.

What was the reasoning behind picking Toulouse?

It’s always been a goal of mine to play in one of Europe’s top five divisions. Since I’ve left England, it’s been a challenging journey, but one of progress nonetheless. When Alain Casanova took the job at Toulouse, it was an opportunity that I felt I was ready for and that suited me, and it’s one that I’m glad I took.

Are there any aspects of Casanova’s coaching that you appreciate in particular?

He’s a winner and a great man-manager. The main attraction for me, other than his character, which is important to have for a good coach, is the way he plays football. It’s the way he pays attention to detail and wants to play the right way. He’s a thinker. If you watch the way we play, the intention is always to be dominant in possession and to hurt teams with the ball. I’ve really come along as a player under him and I hope I can continue to do so.

Were there any other options on the cards this summer?

Well, Bursaspor didn’t want to let me go. I had only been there for six months of a three-year contract, and you don’t usually transfer after only half a year so this was the only concrete offer. I was playing at Bursaspor every week, but this was a move that I wanted to make for myself, my family and it’s one that I was ready for.

What do you take away from your time in Turkey?

I think it’s a place where there’s a lot of pressure on players and managers, but the fans are something special. The atmosphere is intense, and if you can play there and deal with the expectations of the fans and flourish, I believe you can do it in most places. It’s like a cauldron of football.

It’s an amazing place to live and the people there are fantastic. It was the furthest place I’d been away from home; it was a new culture and environment as well as a new league, so I think it helped me develop as a player and as a person.

There’s a lot of things they do differently there in Turkey, that they don’t do closer to home, but it’s something that you have to get used to. The country lives for football.

Were there any issues in particular, either on and off the field?

I had a great time in Turkey and I couldn’t speak highly enough about my time out there. They do things a bit differently, for example the salary doesn’t come on time, which is something I had to get used to very quickly. Sometimes that plays on your mind, but you just have to focus on staying professional and why you’ve been brought there.

I played for a great club in Bursaspor, with supporters amongst the best in the country. Although it can be hard playing there with the heat, which is intense over there, but the country is a great place to play in.

Having played most of your career abroad, would you say that it’s benefited you in a way that other English players haven’t been able to experience?

I’ve been out of my comfort zone for some years now. When you’re out of your comfort zone, away from home and family, it makes you look at yourself and what you’re working towards, what your dreams are.

It’s my passion for football that’s kept me going, but it’s also what’s kept me away from home. I’ve progressed so much abroad and had the opportunity other footballing cultures. I’ve had to push and make the most of the opportunities I’ve had to get to the next level in my career, simply because I had to. I took the plunge, and I’m grateful for the fact that it’s paid off.

Did you feel you had to move abroad to break through?

I had to. My options were very limited in England, and I had the opportunity to go and prove myself in another country. I’ve always dreamt of being a footballer, and you go where you’re wanted, not where you’re tolerated. I had a platform abroad, and it’s good to see that it was the right decision for me. Now I’m still improving; I’m still on my journey and progressing.

At the time, though, it was probably looked down upon and it wasn’t the move that made the most sense, but it’s been the turning point in my career.

You say that back then it was looked down upon, but nowadays we’re seeing more young English players making the move abroad, for example to Germany. Is this a good thing?

For sure. Although with a lot of them they’re just going out on loan, whereas in my case it was a transfer. I would definitely applaud the young players who are looking elsewhere to prove themselves and learn the game and encourage other players to look horizontally rather than vertically. Instead of looking up and down the divisions in England, you can look across Europe. There’s a lot of options out there and clubs that are perfect for building a career.

Would you consider moving back to England in the future?

Of course, if the timing was right. England will always be my home, it’s where I was born and where I made my debuts. If the offer was right I would look at it.

When I went out to Europe it was just my wife and I, now we have a young son, so there are seasons for everything. Right now, Toulouse is a great experience and I’m enjoying it, but if the right offer came then I would consider coming home, if it was right for my career.

Initially, when I left England it was a short-term plan, and I had intended to come back. Now I’ve discovered how effective it’s been for me, to play in Belgium and France, so now it’s become my long-term plan. I’m still young and enjoying it, and I’m still progressing, but eventually one day I’ll retire back to England, whether it’s in football or not.

What would you say are the main differences between football in England and France?

I wouldn’t say there are too many differences. When you look at how much English teams buy in France, it shows how similar the two leagues are. They’re very physical, good technically, and there’s a good mentality in both of them. Belgium and the MLS are different in this, but I think that Ligue 1 and the Premier League are similar.

One thing I would say is that the average age of the teams is probably younger in France. It’s evident that a lot of young players get the chance to prove themselves in France. A lot of countries look at the French league and have great respect for it and look for players there. It’s also place that has great exposure, but with that comes some expectations and judgement from the media.

Would you say that that it’s a lack of pressure that’s allowed you to thrive in your career, as opposed to England when you were in the media limelight?

I would say more so in Belgium, because at that point I was unknown, so that was a breath of fresh air. When I started to become known in Belgium and even more in France, that pressure started to come back because I was making a name for myself and I was the only English player in the country. People now are recognising who I am, but that’s just something you have to deal with as a footballer.

My issue was that when I was fifteen and sixteen, I didn’t really have a platform to deal with the pressure. I wasn’t able to play every weekend to prove myself to silence the doubters and prove to them that I am a good player. However, I didn’t have the opportunity to display what I had during my time in England. Coming away was a great thing because I could play and express myself

Over time, I’ve become stronger mentally, more confident and more able to deal with the pressures of the media and the footballing world. So, in that sense, it’s been a journey.

You’ve talked in the past about the mental challenges you’ve faced over the course of your career. Do you think this is an aspect of football that’s not talked about enough?

I think that in the modern-day outlook on football, there’s a greater understanding of the mental side of the game. Everything starts in the mind, and many sports have shown that the mind is the most powerful tool. The mind is a battlefield, and if you can win that battle you can do anything.

It’s not easy to transition from being low in confidence to being at 100%, I don’t think anyone is totally confident all the time. Over time, you learn your weaknesses and how to combat them. Even though you may not be able to see it, if you believe in it you can achieve it.

As an athlete, if you can train your mind to apply yourself and take yourself to places which aren’t comfortable, you’ll become more comfortable with the uncomfortable and keep on pushing yourself. It’s something that maybe not understood until you’re in that position yourself. Most athletes go through hard times, and it’s when you’re in that period that you learn to fight and win in your mind. I’m no different.

Do you think fans are realising that athletes can struggle with the same problems as anyone else does?

The growth of social media has connected fans and footballers in a new way. Fans are able to ask questions and players can respond, it’s a new way of connection that’s never existed before. This means the footballing community is getting smaller and more intimate, which I think is a good thing.

Players can show who they are away from football, which means fans can see that the life of a footballer is more than just ninety minutes on a Saturday. We have a life outside of it, and there can be so many factors contributing to why we’d play well or not. It could be a family issue, an injury, or anything else. It’s something that’s given people a new outlook on the life of a footballer.