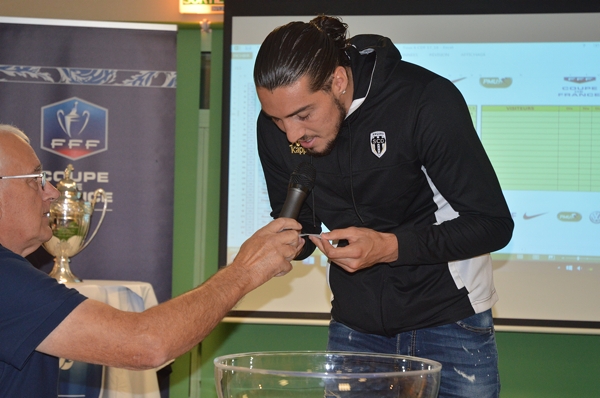 Having enjoyed a promising first half of the season, SM Caen were keen to ensure that they added some quality to the squad during the January transfer window to maximise their chances of a mid-table finish.

Top of their priorities was some additional firepower to relieve the pressure on the ever-reliable Ivan Santini, as well as the never to be underestimated goal-scoring contribution of Ronny Rodelin.

Boss Patrice Garande scoured Europe, and beyond, for attacking talent that would add to Caen’s arsenal in front of goal. The club were reported to be very close to securing a deal for FC Astana’s Ghanaian frontman, Patrick Twumasi, but unfortunately they were not able to get a deal over the line. They were also interested in another Ghanaian talent, much closer to home, in the form of Lorient’s Majeed Waris.

With an excellent strike rate in Ligue 1 for both Lorient and Valenciennes, he also has significant overseas league experience from his time in the Swedish, Russian and Turkish leagues and would have been an exciting addition. However, Caen faced fierce competition for his signature, and Waris chose to add Portugal to his footballing experience, with a loan move to FC Porto.

They did, however, secure the signature of Timo Stavitski, an 18-year old Finnish youth international, from RoPS in his home country’s Veikkausliiga. The baby faced forward, who had undergone a trial at Barcelona, should bring an energy and raw enthusiasm to Malherbe.

More prominently, however, they managed to pull off a significant coup with the recruitment of 23-year old Enzo Crivelli, on an initial loan deal from Angers, with an option to buy in the summer if the Normandy club maintain their Ligue 1 status, which is looking increasingly likely as the season progresses.

Born in Rouen and schooled in the academy of AS Cannes, Crivelli joined Girondins Bordeaux in 2012. In his debut season, he helped their U-19s to victory in the 2013 Coupe Gambardella. His Ligue 1 debut was on 26th January 2014 when he replaced Abdou Traoré for the last seven minutes during a 2-0 win against St Étienne at Stadium Municipal. He signed his first professional contract in May 2015 and celebrated by scoring a few days later in a 1-1 draw with Lyon.

At the beginning of the 2015/16 season, on 27th August, he scored his first goal in European competition, during a Europa League tie in Kazakhstan at FC Kairat. Although Bordeaux lost 2-1, it was a crucial away goal which facilitated the Ligue 1 side coming out on top over two legs and progressing to the later stages.

Crivelli will be no stranger to SM Caen fans, or at least those with good memories, as in November of the same season – 2015/16 – he scored a consolation goal against his new employers in a 4-1 league defeat. However, that was his last league strike and he failed to find the net during the second half of the season.

In August 2016, he signed a new one-year deal with Bordeaux, but was loaned straight out to Ligue 1 rivals SC Bastia, where he really showed his worth, with a return of ten goals in twenty four appearances, although this could not prevent the Corsican side being relegated to Ligue 2.

However, amid interest from fellow French sides Metz, Guingamp and Montpellier, as well as English sides Middlesbrough and Norwich, it was Angers who secured his signature on a four-year deal. He scored on his debut for the club on 12 August, netting in a 2–0 win over Amiens, but, despite the promising start, this was his only goal for the club, in a first half of the season which yielded six yellow cards and one red.

In the January window, Crivelli was the subject of much interest again from both France and England, with Rennes and English championship sides Aston Villa, Cardiff, Leeds and Wolves all rumoured to have the player on their radar, but it was Caen who secured his signature on 31st January.

Initially there was speculation of the player signing for €2.8m on a three-and-a-half year deal, however, an initial loan deal was agreed until the end of the 2017/18 season, when a permanent deal is in place for Crivelli, who sports the number 27 shirt, to remain at the Stade Michel d’Ornano, if all parties remain happy with the arrangement.

Crivelli, who has been capped twelve times for his country at U20 and U21 levels, is certainly no stranger to controversy or the referee’s notebook, and there has always been a question mark over his discipline with his aggressive and confrontational style of play, but there is no question he brings a presence and a physicality to the Caen frontline which they may have been missing.

In the four games so far for his new club, his no-nonsense and all-action style has won his side a penalty and he has shown a willingness to work for the team and get in goalscoring positions, which was rewarded against Rennes with his first strike in the red and blue shirt.

Whilst Caen have not at any stage looked like being sucked into the relegation places, they will look to maintain their mid-table position for the remaining three months of the season and the acquisition of their powerful new frontman looks to be a shrewd move to maintain their Ligue 1 status for another season.

Thiago Silva: “Nothing will break our magnificent dressing room.”