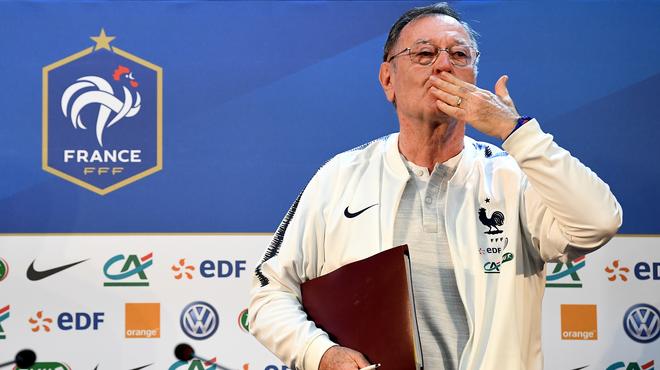 Originally criticised for approaching the World Cup too pragmatically and conservatively, Didier Deschamps has begun to prove many of his doubters wrong. Les Bleus’ disciplined performances and apparent cohesiveness have won over the French, and the stage is now set for a tantalising final against Croatia. Despite Deschamps’ importance, to neglect his backroom staff in all of this would be unfair given their crucial role to the team. Today on Get French Football News, we’ll be taking a closer look at the French national team’s staff, the unsung heroes of Les Bleus’ impressive World Cup run.

First and foremost is Deschamps’ right-hand man, Guy Stéphan. Stéphan has been working as Deschamps’ assistant coach for the last nine years, first with Marseille from 2009-2012 and now with France since 2012. The former attacker, playing most notably for Rennes and Caen, is an intelligent, reserved, accomplished, and respectful coach who complements Deschamps very well, according to French Football Federation president Noël Le Graët. The integral role Stéphan plays for Les Bleus is by no means new to him, as he previously served as assistant coach for his country from 2000-2002. Stéphan’s remarkable CV also features his time serving as manager for Lyon, Bordeaux, and most recently Senegal.

One of the more intriguing characters of Deschamps’ staff is veteran press chief Philippe Tournon, who is the only current staff member who worked for the national team during the 1998 World Cup. Les Bleus’ press chief just recently, on Friday, had his last conference of his career and is set to retire at the age of 74 come the end of this tournament. As the link between the national team and the press and public, Tournon is one of the more visible figures of Les Bleus’ staff.

During his last conference on the 13th of July, Blaise Matuidi and Antoine Griezmann hailed Tournon and his contribution to Les Bleus. “He’s very good at what he does, he’s a great guy,” declared Griezmann, with Matuidi later adding, “I want to thank him. We’ve known each other for eight years now. We’ve spent a lot of time together. He’s been an important part of the French national team throughout all these years.  I hope that he’ll end on a high note.”

Deschamps’ coaching staff is rounded out by goalkeeper coach Franck Raviot and fitness coach Grégory Dupont. Dupont is the newest member of France’s staff, but has already had a significant impact on the team. His attention to detail and perfectionism plays in wonderfully to a French team that commits itself to thorough preparation.

14-page analysis that Dupont produced, specifying the temperature in the stadiums Les Bleus would be playing in and how that would affect the ideal drinking water temperature, is just a peek into the efforts the coach will go to in order to help prepare the players. Raviot, who just celebrated his 45th birthday with his coworkers and players, brings a level of goalkeeping experience that is hard to match. A former keeper himself, Raviot began coaching at the famous INF Clairefontaine academy before working with France’s U21 keepers and finally the first team keepers.

Les Bleus’ vast medical staff is made up of one doctor, four physios, and one osteopath: Franck Le Gall, Alexandre Germaine, Christophe Geoffrey, Denis Morcel, Guillaume Vassout, and Jean-Yves Vandewalle. Vandewalle, the osteopath, had one of the more interesting paths to Les Bleus, who he joined in 2010. Before the French national team Vandewalle worked as an osteopath in professional basketball for 12 years before working with the French gymnastics team at the Sydney and London Olympics.

The physios: Vassout, Morcel, Germaine, and Geoffrey, all bring their own expertise to the medical team of Les Bleus. Vassout, just 32, joined in August of 2016, right around the same time as fellow physio Alexandre Germaine. Denis Morcel was brought on in 2014 upon the request of Guy Stéphan, and Christophe Geoffrey accompanied Deschamps after his appointment in 2012. Franck Le Gall serves as the doctor for both Marseille and Les Bleus, but has been with France longer, joining the medical staff in 2012.

The rest of the French national team’s staff serve in roles slightly more distant from the pitch itself. Philippe Brocherieux manages the administrative duties of the team, Thierry Marszalek, Guillaume Bigot, and Éric Dubray see-over the creation of all FFF videos concerning Les Bleus, Bachir Nehar and Arnaud Barry are in charge of the kits and equipment for the players, Mohamed Sanhadji manages the security and protection of the team, and perhaps most importantly Chef Xavier Rousseau provides the meals and nutrition plans for the players.

While football is a game decided on the pitch between the 22 players involved, success is most often determined by those behind the scenes. With the incredible staff that Les Bleus have accumulated, their chances have only been heightened and the chance to witness this French squad play a World Cup final is the least that Didier Deschamps’ staff deserve.

FEATURE | The 2018 World Cup – the tournament when Paul Pogba finally came of age?