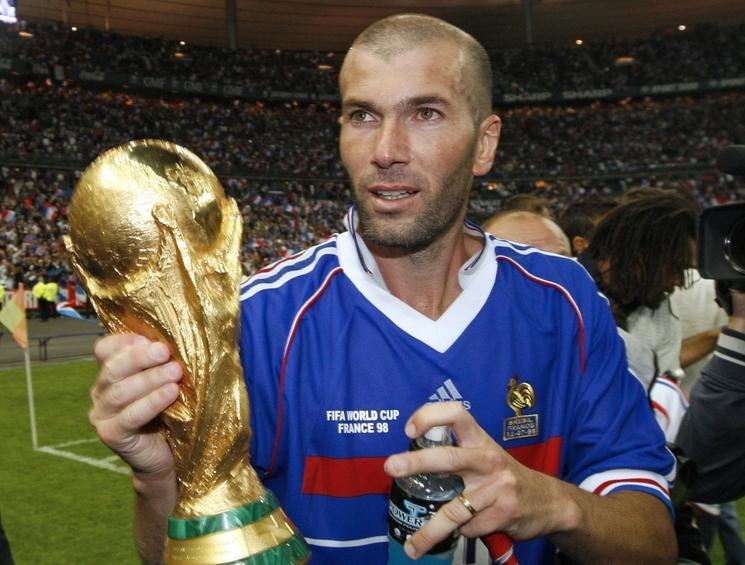 Tricolour flags waving in the distance, crowds flocking to Champs-Élysées, car horns simultaneously erupting, all united in joy. Les Bleus have made it to the World Cup final. The comparison made by man is that this is the ’98 team reborn, and in truth, there are too many parallels to count. The odd coincidences have made headlines every step of the way: another Le Pen struck down in a landslide; Real Madrid are Champions’ League winners; France top group C; and Croatia make the semi-finals of the World Cup.

There is one man in particular connecting the memories of the past to the hope of the present: Didier Deschamps. If you have been following this story from the start of this current French World Cup campaign, you will know that this ride has not been without its bumps. Despite a largely successful set of qualifying results, the critical headlines filled publications in France and abroad. Fast forward, and in typical French fashion, Deschamps is now a hero and is being praised for building a team in his own image. But, is it his own?

From the off, Deschamps has been criticised for his squad selection. This is reminiscent of another legendary French coach, Aimé Jacquet. Jacquet was also put to the fire when he decided to go with youthful exuberance and leave out superstars like Jean Pierre Papin and Eric Cantona. But Jacquet remained true to the squad he selected. Even I grew frustrated with the starting XIs that Deschamps put on the pitch. I scratched my head in disbelief with Deschamps’ audacity to leave out stars and players that many see as more naturally talented than the individuals he selected. I spent many games cursing at the television correlating the slightest resemblance of failure to his selections and formation.

But like most now, I have seen the method in his madness, and was frankly not willing to accept a ruthless pragmatic approach when Les Bleus’ had some of the best attacking talent in the world to dominate. Deschamps is a student of the game and of his predecessor, Aimé Jacquet. Jacquet not only received similar selection-based criticism, but the beast that he created in 1998 was not unlike Deschamps’ 20 years later—a defensively well-drilled, counter-attacking machine. Jacquet put faith in another young striker to execute lightening quick counter-attacks, Thierry Henry, much like Deschamps has in Kylian Mbappé, although the latter has certainly been more of the focal point to this 2018 team than Henry was two decades ago.

Like Jacquet, Deschamps was criticised in the early stages of his World Cup campaign for sub-par performances and a series of narrow wins. The mystique of the ’98 side possibly overshadows the reality of the team. The ’98 team won games in an unpopular fashion. The knockout stages in particular were won with a suffocating defence, penalty shootouts, and one-goal wins. You may also recall another French defender by the name of Lilian Thuram scoring a game-winning semi-final goal to take Les Bleus to the ’98 final, having the same ultimate effect as Umtiti’s vital header in the semi-final against Belgium early this week. Critics claimed that Jacquet lacked style and produced “ugly football”. Jacquet famously responded to his doubters with “at the end, we will see who was right.”

What we now view as the “Atletico Madrid style of play” can be in part argued to have been adopted and adapted by Jacquet and reclaimed Deschamps. What the critics refused to accept earlier on in the tournament and what an angry Belgium team hates to admit now, is the sheer effectiveness of such an approach. I recall seeing a comedy skit that aired in France that mocked Jacquet’s style through the use of puppets. The Jacquet puppet said something like, “I don’t care about putting on a show, I care about winning.” Whilst the skit intended to be funny, he who laughs last laughs longest. 20 years later, we don’t say, “The ’98 team was boring.” To the contrary, we look at the ’98 team as one of the greatest World Cup squads ever.

The combined strength of both the 1998 and 2018 teams were their ability to be flexible and react in a short space of time between matches in order to best prepare for their opponents, but more impressively in match situations. France made crucial positional changes in midfield to help cover the pressure created by Eden Hazard and Kevin De Bruyne in the second half vs. Belgium. Jacquet’s 1998 team greatest asset was an ability to withstand pressure from their opponent’s attack. Brazil, like others, found themselves lost in France’s final third 20 years ago, a defence led by 2018’s own Didier Deschamps. Now, Deschamps has found himself a brilliant successor in N’Golo Kanté. Jacquet knew the importance of his defensive midfielder, Deschamps, “the water carrier” – a nickname for a playing style that once may have sounded like an insult is now sees Kanté receiving recognition as arguably the tournament’s best player..

Yet the biggest similarity between the Deschamps and Jacquet’s French teams is arguably their use of the centre forward. Even though their respective adopted tactical shapes, they mirror each other; both used their central attacker to hold up play. When you assess Deschamps’ tactics and selections through Jacquet glasses, everything becomes clear. Even the use of Matuidi is a blast from the past. The Christmas tree formation or 4-3-2-1 uses interchanging midfielders to support the defence and requires the centre forward to hold play for other, quicker attacking players. Deschamps allows Matuidi to burst forward, but in defence, he slides into the midfield replicating the ’98 4-3-2-1. Even Griezmann moves into a more central role to complete the reproduction. So, the Deschamps squad is derivative of the ’98 squad, but the former Marseille boss has definitely added his own touch.

Deschamps is one game away from making history. Victory as a player, and as a coach. Jacquet may not be in the managerial hall of fame, but he has made his own mark on the game. 20 years later, many players from his ’98 team are making waves in the coaching world. Zinedine Zidane a three-time UCL winner, Deschamps a European Championships finalist and one game away from his own World Cup title as a manager, not to mention Thierry Henry as the attacking coach for France’s most recent opponents, Belgium. Whilst it is over-simplistic to state that the managerial philosophies of his former players derive exclusively from the school of Jacquet, they represent the next golden generation of French coaches. Deschamps was one of Jacquet’s favourite pupils, and now seems to have taken after Jacquet in his tactics.

What happens next? Jacquet famously retired after his 1998 triumph. Regardless of the outcome today’s final, France has confirmed itself as one of the greatest national teams in the world. Expectations for future tournaments will be greater than ever before, but as ever Deschamps will not be swayed by public opinion in making a decision on his future. This debate however holds no significance unless Les Bleus win. So, Allez Les Bleus and win or lose, we thank you Didier Deschamps. Well done.